HONG KONG   Factory activity gauges for January show most Asian economies in expansionary territory -- save for Malaysia, South Korea and Hong Kong. But manufacturers are not out of the woods: Fast-rising input costs are casting a shadow on their profitability. 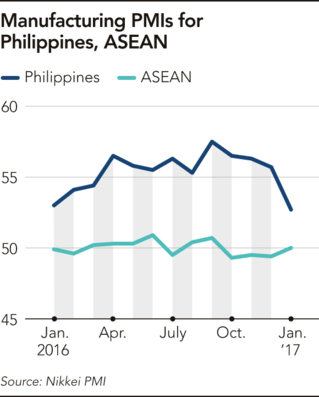 The headline Nikkei ASEAN Manufacturing Purchasing Managers' Index logged a reading of 50 for January, rising to the boom-or-bust line for the first time in four months. A measure above 50.0 indicates expansion, while anything below signals contraction.

The sub-reading for input prices, though, jumped to a 16-month high of 57.5, while output prices trailed at 52.2. The gap of 5.3 points was the widest since the survey began in January 2016.

Myanmar, which printed its best PMI in 12 months, saw the fiercest cost inflation, at 69.9, followed by Malaysia's 63.6. Outside of the Association of Southeast Asian Nations bloc, Taiwan felt the strongest cost pressure, with its input price gauge soaring to 73.7.

"In many ways, [the results reflect] higher commodity prices creeping through," said Joseph Incalcaterra, a Hong Kong-based economist at HSBC. "In most countries, actually, the domestic demand environment isn't strong enough to justify significant output price increases. That's why you have a margin squeeze."

The Nikkei Commodity Index, which tracks the wholesale prices of 42 materials, hit an 18-month high at 171.743 in January. Prices for natural rubber surged 34.1% on the month, with benzene prices climbing 18.8%, copper and copper-based alloy products jumping 8.4%, and lead rising 4.7%.

Incalcaterra said the margin pressure on Philippine manufacturers "should not be as significant" compared with their peers elsewhere, thanks to fairly strong growth in domestic employment, fiscal stimulus and brisk private construction. Still, Philippine output prices lagged behind input prices by 4.9 in January, while the headline reading slowed to 52.7 -- the weakest since the survey began.

"The Philippines is currently one of the better business environments in Asia, simply because it does not have much economic uncertainty pertaining to the external growth outlook," Incalcaterra said, noting that China, South Korea, Thailand, Malaysia and Singapore are more susceptible to U.S. President Donald Trump's protectionist policies.

"The [Philippine] economy is a bit less geared toward exports," he said. "The driver of growth is domestic demand for now. If there's some fear in protectionist policy, it's in the outsourcing sector."

Incalcaterra expects increased government outlays in 2017 to buoy a Philippine economy that grew 6.8% last year -- the fastest pace since 2013.

To cope with the sustained upturn in new orders, Taiwanese producers last month added workers at the second-fastest clip since April 2011.

"As demand conditions remain favorable and firms continue to increase their capacity, it seems likely that the sector will continue to expand in the coming months," said Annabel Fiddes, an economist covering Taiwan for IHS Markit. "However, bottlenecks at suppliers may hinder manufacturers," said Fiddes, who noted that nearly 22% of survey panelists reported higher amounts of incomplete work. The index for supplier delivery times also worsened to 39.7, the slowest reading since April 2011, due to stock shortages at vendors.

In contrast, South Korean manufacturing conditions deteriorated for the fifth consecutive month, as new orders continued to dry up. Some producers, forced into workforce retrenchment, attributed the decline to low consumer confidence and an unstable domestic economy amid the political vacuum left by President Park Geun-hye's impeachment. A hefty cost burden -- which grew heavier at the quickest pace in six years due to unfavorable exchange rates -- added to the strain. 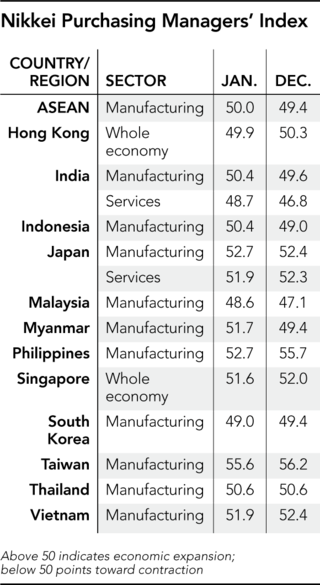