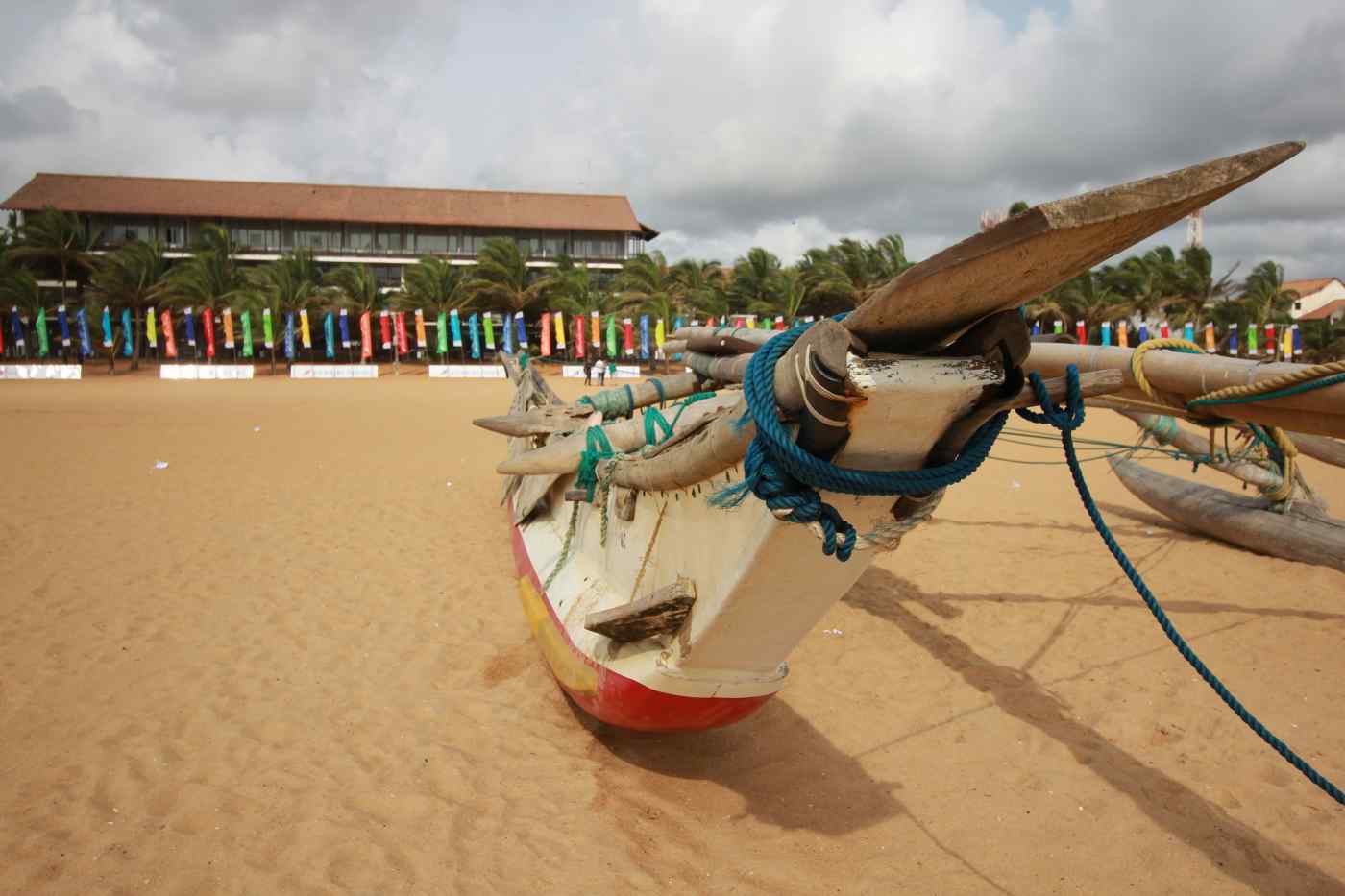 Hiran Cooray, a tourist industry veteran, welcomes such mainstream leisure travelers to the six hotels his company owns in the town. "Negombo is our main profit center," he said of his Jetwing properties, which provide 400 rooms catering to both high-end travelers and budget-conscious backpackers. Hiran Cooray, chairman, Jetwing Hotels, at one of his Negombo resorts (Photo by Marwaan Macan-Markar)

Cooray is bullish about continuing demand from Western and Asian tourists for an "organized holiday, where you want breakfast served, rooms cleaned, and a pool to take a dip in." Other operators agree, noting that Sri Lanka welcomed a record 2 million tourists in 2016, compared with just 500,000 in 2010, a year after the end of the bloody, three-decade civil war in this South Asian island state.

But as the country's industry crunches the tourism earnings numbers -- $3.7 billion in 2016 according to official data -- a troubling reality is dawning: Not all the dollars are flowing to the formal tourism sector, in which hoteliers like Cooray have invested heavily. "Nearly half of the tourists make travel plans and stay in rooms offered online -- homestays, non-registered guesthouses, Airbnb -- that are all part of the informal sector," said a tourism ministry official. Sri Lanka is not alone. Countries across Asia enjoying a boom in inbound tourism are grappling with this shift in travel habits shaped by smartphone-savvy tourists. The message was driven home at the annual Pacific Asia Travel Association summit, held in mid-May in Negombo.

The Asia-Pacific region received close to 600 million inbound tourists in 2016, the largest share of the 1.2 billion tourists who crossed international borders, conference delegates were told. Within that region, Asia received almost 436 million international arrivals, according to PATA's Annual Travel Monitor for 2017. But the new order shaping this growth is led by travelers who go armed with digital tools to "disrupt" the old order of organized holidays.

"The 45-65 age groups are shunning package travels, and they are the largest group using Airbnb," said Rafat Ali, founder and CEO of Skift, a New York-based online supplier of global information on the travel industry. Even restaurants are changing their designs and menus because of social media, he added, since "they want to make sure it looks good on Instagram."

The Indonesian resort island of Bali is basking in this unfolding social media disruption. TripAdvisor, the world's largest travel site, in April named the island, known for its warm seas, coral reefs and terraced rice paddies, as the world's best travel destination for 2017, based on travelers' reviews. Chinese visitors were a pivotal influence on Bali's triumph, with Bali-related online searches increasing 73% year-on-year, according to TripAdvisor.

"Travelers want a lot of information and a lot of content before choosing destinations," said Sarah Mathews, head of destination marketing for Asia-Pacific at TripAdvisor. The site's online reviews of travel destinations have surged to 500 million, and it says 390 million monthly unique visitors use TripAdvisor to "search and plan trips."

But this picture of success is open to debate. Framing it is a question many travel industry insiders in Asia are grappling with: how do you measure the economic impact of travel shaped by independent tourists who use digital tools to plan holidays that promise unique, local experiences -- the new mantra of leisure-seeking globetrotters? "There is a need for a new economic model to measure how the new tourist trends contribute to economic growth," Mario Hardy, PATA's CEO, told the Nikkei Asian Review. 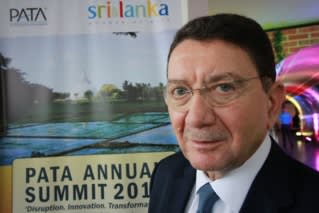 Taleb Rifai, secretary-general of the World Tourism Organization, at the PATA summit in Negombo (Photo by Marwaan Macan-Markar)

There are ample figures to mine from tourist industry earnings, which contribute significantly to gross domestic product across many Asian countries. Total tourism earnings across the Asia-Pacific region in 2016 amounted to $2.27 trillion, accounting for 9% of the region's GDP, according to a March report by the World Travel and Tourism Council, a London-based network of travel industry leaders. "(It) is forecast to rise by 5.8% in 2017, and to rise by 5.7% ... to $4.17 trillion (10.7% of GDP) in 2027," the WTTC noted.

Tourism earnings in 2016 in South Asian and Southeast Asian economies illustrate the good times. The total in the Maldives, a necklace of resort islands in the Indian Ocean, was $2.6 billion, estimated to account for 79.4% of GDP, while India raked in $208.9 billion, equal to 9.6% of GDP, according to the WTTC report. Thailand's total tourism earnings hit $82.5 billion, equal to 20.6% of GDP, while Malaysia's total earnings were $40.4 billion, or 13.7% of GDP.

Other measures suggest why some Asian destinations are riding high on the global tourist wave, with the top destinations enjoying 10% growth in overnight stays between 2015 and 2016. An annual assessment by MasterCard, the credit card company, placed Bangkok as the most visited destination in 2016, with 19.3 million arrivals. Singapore was second, with 13.1 million, followed by Tokyo with 12.6 million, Seoul with 12.4 million and Kuala Lumpur with 11.3 million, according to the MasterCard Asia Pacific Destination Index 2017.

Tourists spent liberally during their holidays, MasterCard said. Travelers from China (17.7%) and South Korea (8.8%) were the largest contributors to tourism expenditure. Their appetites for "new shopping or culinary experiences" were leading indicators in spending patterns in Singapore, which topped the MasterCard rankings for Asia Pacific destinations by tourism spending. Travelers spent $15.4 billion in the city state, followed by $12.7 billion in Bangkok, $11.1 billion in Tokyo and $9.9 billion in Taipei.

Travel industry leaders credit regional governments for these stellar numbers. "When you talk to presidents or prime ministers in Asia, they take pride in the tourism sector," said Taleb Refai, secretary general of the World Tourism Organization, a United Nations agency. "They know how important tourism is for their economies and have taken initiatives, so the degree of dependency on tourism is high."

That could also mean targeting Airbnb, the global network that offers local homestay accommodation at bargain prices. After allowing the San Francisco-based company to thrive in an informal travel market, plying adventurous globe-trotters with new destinations, some governments are wising-up. "We are working with governments to figure out tax issues [related to Airbnb services]," Thao Nguyen, head of strategic partnerships at Airbnb's Asia-Pacific office, told the PATA conference.

Analysts expect these "sharing economies," as Airbnb services are described, to shift the balance of taxation in Asia as the social media market expands. They say that Asian governments may take a cue from travel destinations in France and America, where Airbnb's accommodation services are already taxed, as a way of regulating its activities. That would guarantee tourism's place as a dependable money-spinner in Asia.