GDP contracts 3.3% in second quarter, but economists see a rebound

SEOUL -- South Korea entered a recession for the first time in 17 years as exports plunged due to the coronavirus pandemic.

The Bank of Korea announced Thursday that the country's gross domestic product fell 3.3% in the April-to-June period from the previous quarter, when it contacted 1.3%. It is the first time that the economy shrank for two straight quarters since 2003, and the quarterly drop is the steepest since 1998.

Exports fell 16.6% -- the steepest slide since 1963 -- and imports dropped 7.4%. Private consumption increased 1.4% on higher expenditure on durable goods such as cars and home appliances.

"The Korean economy has been downward since October 2017, and the coronavirus shock accelerated the speed of the economic downturn," BOK director Park Yang-soo said at a news briefing after the data release.

The recession comes as President Moon Jae-in plans to hike property and sales taxes to tame soaring home prices, especially in Seoul. Such a policy gives little room for the BOK to ease policy further as lower interest rates risk providing too much liquidity in the housing market. 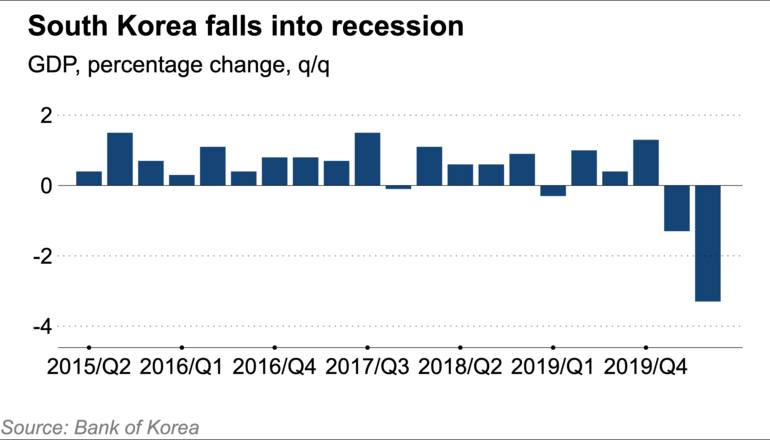 BOK Gov. Lee Ju-yeol said last week it is important to let abundant liquidity flow to productive sectors. "The most important thing is that we have many productive places to attract investments," Lee said at a news conference.

Lee said the country's GDP may contract further this year from the central bank's forecast of minus 0.2% growth in May.

The BOK's Park said the central bank would provide an adjusted forecast for growth this year in August.

"The yearly growth depends on how quickly the economy will rebound," Park said. "The Chinese economy rebounded sharply. We can follow its step." "I am sure that the Korean economy will recover in the second half of this year. The point is how strong it will be," said Oh Suk-tae, a senior economist at Societe Generale in Seoul. "There is a debate over whether it will be a U-shaped, or V-shaped recovery, and I think it depends on how quickly vaccines will be developed and how long we could sustain until then."