As dreams fade for young, Moon calls for 900,000 publicly funded jobs by Q1 SEOUL -- The prolonged novel coronavirus outbreak has dealt a body blow to the labor market in South Korea, causing the number of people in paid employment to plunge by nearly 1 million in January alone.

The current unemployment crisis is the worst since South Korea's financial crunch of 1997, President Moon Jae-in said Monday, pledging that his administration would take all possible measures to cope with it. But government-led efforts to create jobs have their limits.

Koo Seo Jin, 25, who studied aviation at university, is on the verge of abandoning her dream of becoming a flight attendant. COVID-19 exploded after she graduated last spring, short circuiting her plans to take the necessary examinations and rendering her career preparations useless.

She continues to hope that exams will resume. But the virus has run riot, further darkening airlines' business prospects. Koo landed a part-time job as a receptionist at a financial institution early this year, but she is not ready to give up her dream completely. "I will start trying again when the coronavirus problem subsides," she said.

The COVID-19 pandemic has also derailed the plans of Kim Seung A, 23, who majored in dance at university and hoped to become a dance and Pilates instructor. But as classes shut down amid the health crisis, she failed to find a job in her chosen field. Now she works part time at a restaurant, trying to save money so she can get a license as a Pilates instructor. 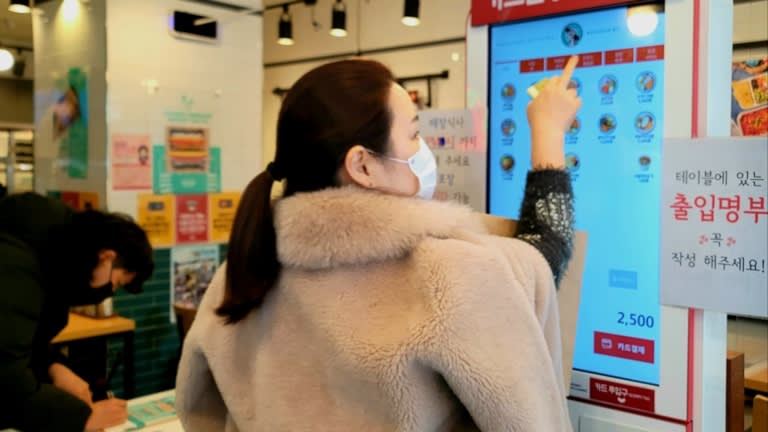 A woman makes a selection from a vending machine at a snack bar in Seoul: Increasing automation in the food service industry is weighing on employment.

Disappointed as they are, Koo and Kim may be among the lucky ones: at least they have jobs. In South Korea, the job crunch started even before the coronavirus outbreak due to a steep rise in the minimum wage and tougher regulations on overtime. That prompted both companies and sole proprietorships to cut back on hiring.

The pandemic has fueled the trend. Many restaurants, along with leisure and sports facilities, have been forced out of business by coronavirus restrictions. As demand for part-time workers has shriveled, many people are struggling to find any kind of work.

A report on employment trends in January released by the National Statistics Office on Feb. 10 reflects the severe state of the labor market. In January the number of employed people plunged by 980,000 to 25.82 million, the 11th consecutive year-on-year decline. The drop was the largest since a 1.28 million decline in December 1998, following the 1997 crisis. South Korea's 420,000 jobless pushed the unemployment rate to 5.7%, a year-on-year increase of 1.6 percentage points.

The labor market's woes are hitting young people hardest. In January, workers in the 15 to 29 age bracket saw 310,000 jobs vanish due to worsening conditions in industries that hire more young workers, such as restaurants and hospitality. The youth unemployment rate rose 1.8 points to 9.5%.

Hiring among older workers, which had held up well, is now looking shaky as well: The number of employed people aged 60 and older slipped by 15,000, versus a gain of 250,000 in December.

Since the Moon administration took office in 2017, the number of people over 60 with jobs has risen, while employment among younger workers has been on the decline. The trend owes mostly to demographic change bought about by a falling birthrate, but there are other reasons.

An analysis of the fall in senior employment in January reveals a quirk of the government's job policy, on which it has spent 100 trillion won ($90.47 billion) over the past four years.

Many older people work in part-time jobs as cleaners, cooks or directing traffic, for example, with public institutions paying their wages. The number of older people working fell in January because such "fiscal employment programs" expired at the end of 2020. In addition, cold weather and heavy snow put many jobs for the elderly on hold.

Among other directives, he said: "We will first strengthen the pump-priming role of the public sector to greatly increase employment opportunities. We will carry out a plan to directly employ more than 900,000 people by the first quarter."

But half of those jobs are to be reserved for the elderly under fiscal employment programs. In a scathing editorial, Chosen Ilbo, a conservative daily, said the president's "exceptional policy" is no more than the provision of taxpayer-funded part-time jobs. Calling the distribution of subsidies job creation, will boast about an increase in employment using fake figures, it said.

As poverty among the elderly is a serious social problem in South Korea, it is not necessarily wrong to use taxpayer money to create jobs for them. But priority should be given supplying "high-quality employment" to young people and women.

The government said public institutions, such as Korea Electric Power, Korea Land and Housing, and the National Health Insurance Service, will increase hiring by more than 45% in the current fiscal year from the previous year. But swelling public payrolls are likely to hamper government efficiency.

The private sector holds the key. The government aims to encourage the private sector to hire more by expanding its regulatory "sandbox," which exempts companies from certain regulations. It is designed to foster innovation and mobility, offers support for venture businesses and grants tax breaks to companies that maintain or increase employment.

But the government's package of measures makes no mention of the deregulation craved by business.

There are limits to what the public sector, acting alone, can do to bolster the labor market in South Korea. To create lasting jobs requires comprehensive measures to make the private economy more vibrant, such as deregulation and improvements in business conditions, according to the Korea Economic Research Institute, the think tank of the Federation of Korean Industries.