SEOUL -- President Moon Jae-in came into office in 2017 pledging to help the working classes, but now the labor unions that once backed the South Korean leader are speaking out against his policies.

The Korean Confederation of Trade Unions, a major umbrella group with more than 650,000 members, will on Thursday hold its first one-day general strike since Moon was elected. The organization is planning a large rally outside the National Assembly, as well as protests across the nation.

The group is calling on the Moon government to make labor-friendly policy changes, such as stricter corporate regulation and the abolition of South Korea's two-tier labor system. But perhaps most pertinently, the KCTU is hitting out against the slowing of minimum wage hikes -- a key element of the president's "income-led growth" strategy.

Moon's government has argued that higher wages will boost consumption and ease inequality in an economy dominated by a small number of massive conglomerates. He has pledged to raise the minimum hourly wage to 10,000 won (US$8.49) within his five-year term. But after large increases in the first two years -- 16.4% then 10.9% -- the minimum wage commission last week announced an increase of 2.9% for 2020, bringing the hourly pay floor to 8,590 won.

The lower increase came in apparent response to a perception that employers are not ready for another significant rise. Business owners say that street-level operations, such as restaurants and convenience stores, cannot cope with higher labor costs.

Moon's political opponents argue his economic policies have backfired, that businesses have opted to fire workers instead of paying higher wages and that Moon's moves have impaired growth instead of boosting it.

"I don't think the increases of the past two years substantially increased consumption," said Lee Jung-min, a professor of economics at Seoul National University. "The disposable incomes of workers who kept their jobs might have increased but some people lost their jobs. Also, if workers used that disposable income to repay debts, then the effect on consumption would be minimal." 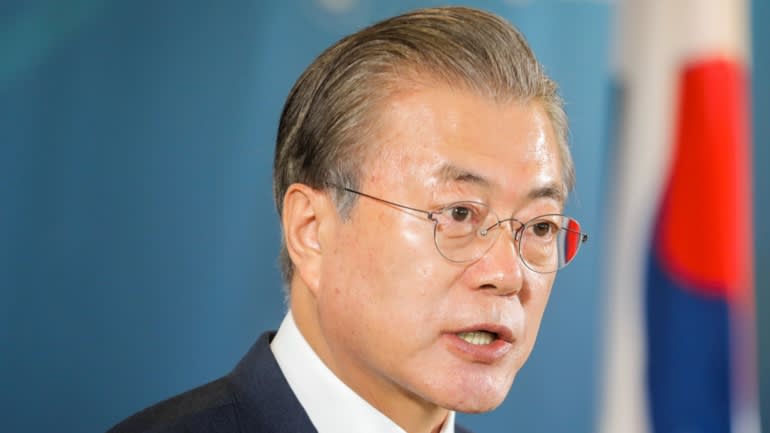 South Korea's President Moon Jae-in faces an uphill battle over the remainder of his single, five-year term, in trying to balance the interests of workers and employers.   © Reuters

The number of people unemployed is at the highest level in 20 years -- the worst since the wake of the Asian Financial Crisis, government data last week showed.

Analysts argue that the drastic minimum wage increases of the past two years did not adequately consider economic conditions.

"The minimum wage rose beyond what the market could accommodate and resulted in social costs that were the opposite of the government's intentions," said Kim Nak-yeon, a professor of economics at Dongguk University in Seoul.

Earlier this month, the finance ministry trimmed its growth projection for this year to 2.4-2.5%, lower than its initial 2.6-2.7% target. The ministry pointed to slower exports as a reason for the dimmer outlook.

South Korea's export-dependent economy is grappling with headwinds from the U.S.-China trade conflict, and a bilateral dispute with Japan.

Tokyo has slapped restrictions on shipments to South Korea of materials used in the production of semiconductors, a key South Korean export. Seoul has interpreted this as retaliation for Supreme Court decisions ordering Japanese companies to pay compensation to people forced to work for them during Japan's 1910-45 colonial rule of the Korea Peninsula. Tokyo has framed it as a national security issue.

Moon now faces an uphill battle over the remainder of his single, five-year term, in trying to balance the interests of workers and employers.

"Moving ahead, the government will have to craft policies that consider the effect on businesses and employment," said Kim, the economics professor.

The current union action is another headache for the president, whose approval rating is around 45 percent -- around half that of when he held his first historic summit with North Korean leader Kim Jong Un in April last year.

In recent weeks, public sector workers in schools, public transportation and post offices have threatened or carried out strikes, at times paralyzing public services. Around 15,000 support staff at elementary and middle schools walked out, meaning thousands of children had to eat packaged bread and milk instead of their usual school lunches.

KCTU spokesman Kim Hyung-seok said the slowing of minimum wage raises was another misstep by the Moon government.

"The government pushed through the lower increase using improper criteria such as economic conditions and businesses' ability to pay higher wages," Kim told the Nikkei Asian Review. "We condemn this anti-labor decision and will continue to fight against low wages and social polarization."

South Korea's labor ministry, meanwhile, issued a statement on Monday asking the union group to "exercise restraint" at a time of national economic instability, and seek to address grievances through dialogue.