South Korea set to cut rates amid risk of deflation

Economy is losing steam as exports decline amid trade war

After easing in July for the first time in three years, the Bank of Korea is projected to make a 25 basis point cut to 1.25%, according to 30 of 31 analysts polled by Reuters. Seventeen said they expect the BOK to cut at least twice more by the third quarter of next year.

The country's consumer price index fell 0.4% in September from a year earlier, with fresh food prices dropping 15.3%. The BOK said in a statement that consumer prices will remain sluggish until at least November.

Economists say, however, that despite increasing downside pressure on prices, it is too early to say the country is facing a period of protracted price falls similar to Japan's so-called lost decades in the 1990s and 2000s.

Kim Chan-hee, an economist at Shinhan Investment Corp., said that South Korea's case was different from Japan and Europe. For Japan, it was collapse of asset bubbles, while the eurozone was hit by fiscal austerity, he said.

"In the case of South Korea, low outside demand due to the G2 trade conflict is lowering total demand," Kim said. "But, G2 countries are open to negotiations and South Korea seeks to support demand with expansionary fiscal policy and monetary easing." 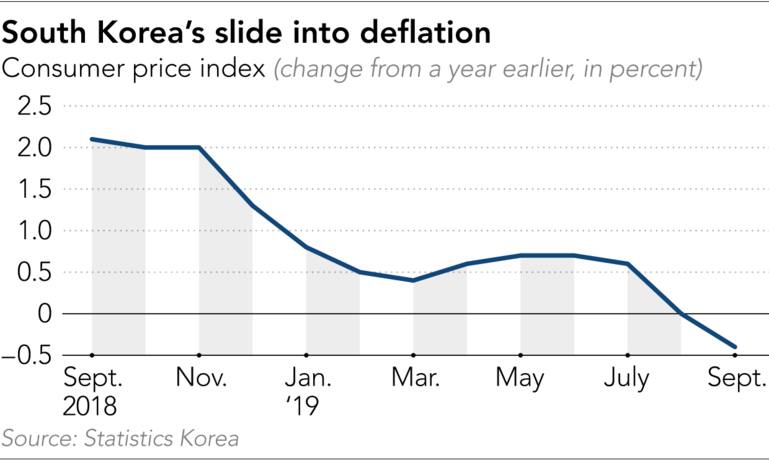 BOK Gov. Lee Ju-yeol said last week that "unexpected factors from the overseas market" will make it difficult for South Korea to reach its growth target of 2.2% this year.

Experts agree that the export-reliant economy is losing steam on the back of the trade war, and Japan-imposed restrictions of exports to South Korea. Indeed, shipments overseas dropped 11.7% to $44.7 billion in September from the previous year, following a 13.6% fall in August.

Corporate investment is also sluggish. The equipment investment index, a key indicator of business sentiment, fell 8.7% in the second quarter from a year ago, after a 19.6% plunge in the first three months of year.

"Despite the improvements in consumption, the Korean economy remains stagnant on shrinking exports," said Korea Development Institute in a monthly report. "As exports and investment continue to recede, economic activities are stalling led by the mining and manufacturing and construction industries."

Further cuts are also likely, according to Park Seok-gil, an economist at JPMorgan.

"Reflecting the downside risks to growth and inflation path and relatively sanguine financial stability issue, we continue to expect two more easing actions by 1H20," Park said in an emailed note. "The follow-up action will depend on incoming data and impacts from trade tensions as the governor commented, and we maintain a follow-up cut in 1Q20 but as a closer call given the cautious stance by the BOK."