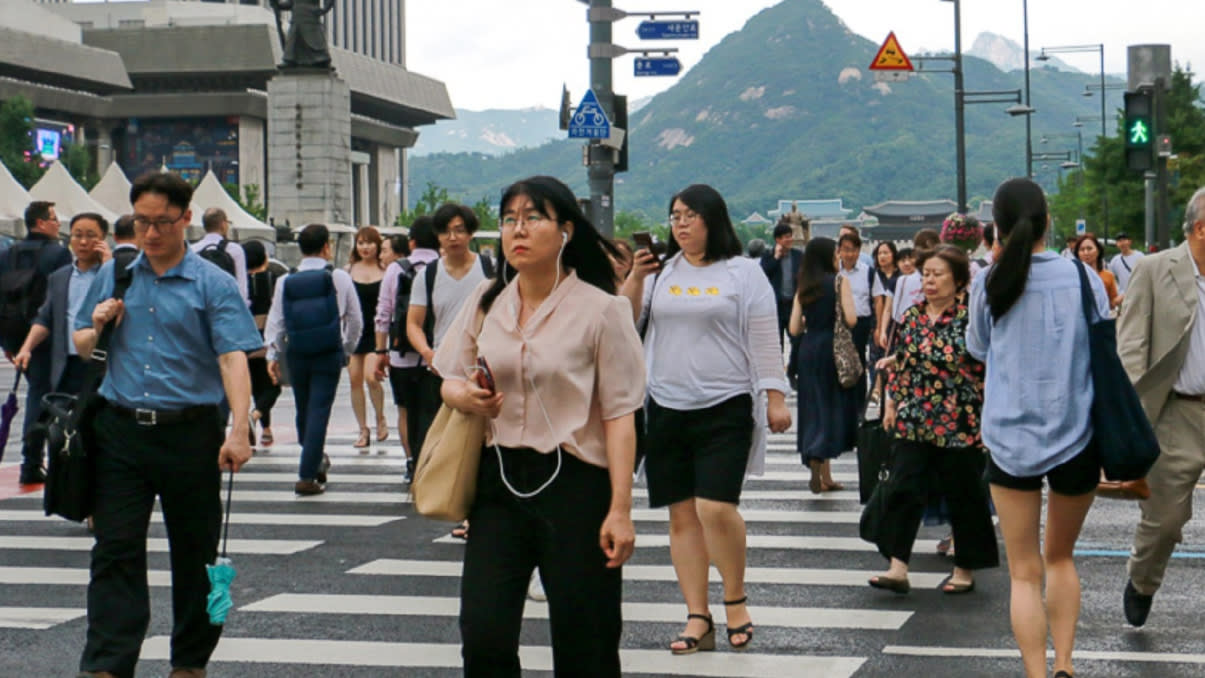 Employees going home after after 5 p.m. in Seoul.

SEOUL -- South Korea is embarking on its own labor reforms to reduce overwork, resorting to draconian punishments on violators, but companies worried about greater costs may not necessarily increase hiring as hoped for by the government.

The revised law that went into effect Sunday slashes the maximum workweek to 52 hours from 68 for companies with 300 employees or more -- equal to 12 hours of overtime. Violations will cost employers up to two years in prison or a fine of 20 million won ($17,882).

All businesses will be subject to the 52-hour cap by 2021. By reducing overwork and enforcing "work-sharing," the government hopes to generate employment as well.

The corporate sector is scrambling to respond, such as by forcibly shutting down computers.

Chipmaker SK Hynix sends emails to staff and their supervisors for every four hours worked over the 40-hour week. SK Telecom, meanwhile, requires personnel to take off Friday if they worked more than 40 hours from Monday to Thursday.

Long hours have long been a fact of life in South Korea. The country comes in second in the Organization for Economic Cooperation and Development's 36-nation work-hour rankings, at 2,052 hours per year, trailing only Mexico, which has logged 2,348 hours. Ranking fourth is Japan, infamous for its overtime culture, at 1,742 hours. Japan's parliament passed a work-reform law last month, capping overtime at 100 hours per month.

President Moon Jae-in himself succumbed to exhaustion from overwork after working virtually without rest since taking office in May 2017. He took two days off at the end of June, saying that he was embarrassed about falling ill from overwork as he himself advocated for work reform.

Although Moon aims to change South Korea's work culture, his real goal is to boost employment. At more than 10%, South Korea's youth unemployment has become a significant social issue. Minister of Employment and Labor Kim Young-joo said the new law has created 10,000 more jobs, with another 20,000 projected.

The idea is that companies will need to hire more people to complete the same amount of work, since optimizing operations alone will be insufficient to make up for limiting the hours of current staff.

But businesses are not exactly eager to hire new employees. The Lotte group has added just 200 production workers among four of the conglomerate's manufacturing subsidiaries. Supermarket chain Lotte Mart, meanwhile, decided to close its stores an hour earlier, now opening from 10 a.m. to 11 p.m.

South Korean newspapers normally don't publish on Sundays, but the Seoul Shinmun also stopped Saturday publications starting this month, because it is unable to staff enough people with the new rules.

Businesses are also worried about the cap's impact on their earnings. A survey of large corporations by the Korea Economic Research Institute found that 55% believe the new law will hurt earnings, compared to just 20% who believe it will help.

Small and midsize businesses suffering from a labor shortage have also griped that they have been given inadequate time to prepare. In response, the government created a six-month grace period to waive punishments. But the concern is even greater for smaller businesses that will be subject to the law as early as next year. 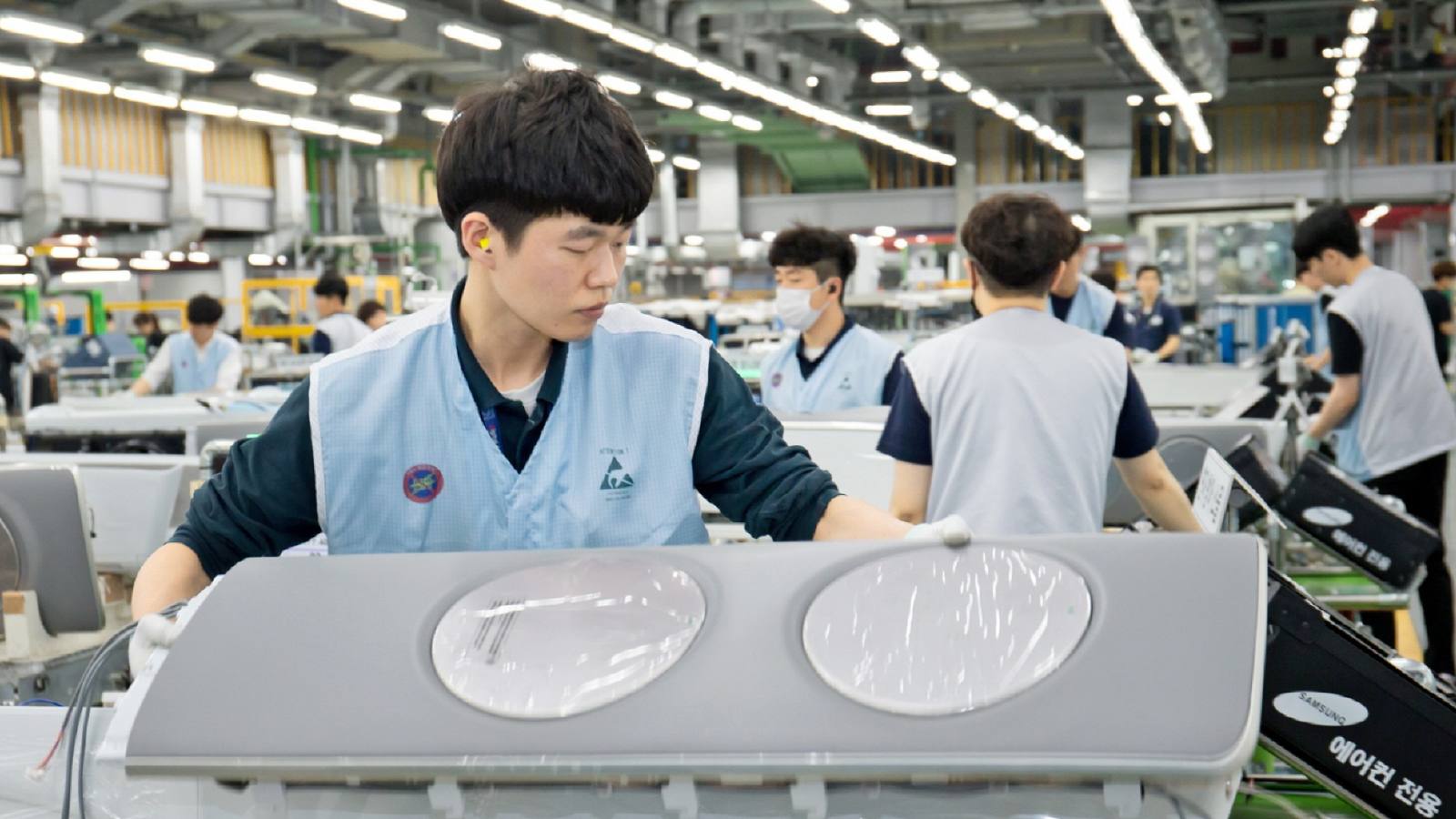 Samsung gets serious about fighting overwork

What constitutes working hours is also a subject to debate in a country where such business practices as wining and dining with clients are widely accepted. The Ministry of Employment and Labor defines work hours as time spent under the supervision of one's employers, but says decisions will be made on a case-by-case basis.

Take a golf outing or a dinner with clients, for example. Those activities are included in work hours if ordered or approved by supervisors, but are excluded should no such direction be given, even if the cost is covered by the company. The Chosun Ilbo newspaper asked three prominent law firms what will happen to nighttime meetings over a drink or two, but the answers were mixed.

So are peoples' opinions on the impact of the revised rules. South Korean offices are famous for their strict hierarchies, and many employees feel uncomfortable leaving before their managers. A young employee from one machine manufacturer, however, relished that he was now free to just go home. Self-improvement and leisure industries are also hoping that newfound free time will lift demand.

Some employees, on the other hand, worry about more "homework," so to speak. One logistics company employee said he does work on his personal laptop when his work laptop times out. Others can be seen doing work for their companies in internet cafes. Many employees are worried about losing income as a result of less overtime, as well.