SEOUL -- A city near the southern tip of South Korea wants to go ahead with a plan to pay autoworkers less than 40% the national average and perhaps keep its population from further declining. The proposal to set up a contract manufacturer is held together by a number of linchpins, one of which is made up of central government funds, the deadline for which is sometime early this month.

The government intends to finalize its fiscal 2019 budget within days and will not include money for infrastructure and other tertiary needs in Gwangju unless all sides agree to the plan.

Union members working for Hyundai Motor, which is discussing the project with city officials, are threatening a major strike. They say such a drastic salary proposal would put the pay of every autoworker in the country under downward pressure.

Kia Motors, a Hyundai Motor affiliate, already has a plant in Gwangju, where the auto industry generates 45% of the city's manufacturing sales. But Kia's output has been declining as production moves overseas and domestic sales slump.

Kim Jae-wan, the union's local leader, has called for the plan to be scrapped. He says the industry already faces cutthroat competition due to declining domestic production and an acceleration in the shift of jobs overseas. Despite its significantly lower labor costs, the proposed plant would "also inevitably bleed red ink," Kim said.

Gwangju residents see a different reality, one that is perhaps tainted by the negative "aristocratic" reputation that members of South Korean auto unions now have. A 20-something man looking for work expressed his support for the plan. "It is a good thing for the number of jobs to increase," he said.

The proposed contract manufacturer would operate as a partnership between the city and Hyundai. It would pay production line employees no more than 35 million won (about $31,400) a year, much less than the 92 million won that the average autoworker at a major vehicle plant in South Korea earns. In addition, the proposed company would not allow pay increases for five years, the time needed to get an auto factory up to full speed, according to a city official.

South Korean autoworkers are among the world's most prolific strikers. As a result of past actions, they earn more than Toyota Motor workers in Japan or Volkswagen workers in Germany. This time, though, the tide of globalization and the South Korean zeitgeist seems to be against them. 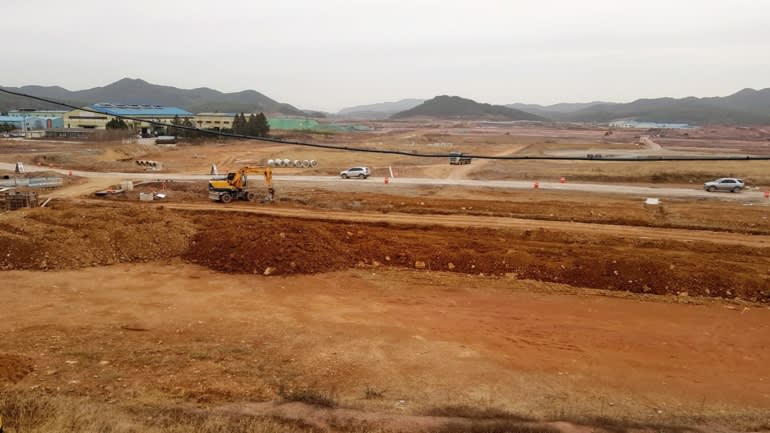 An industrial park is being built on the outskirts of Gwangju, in southwestern South Korea. Plans call for an auto plant to be set up here.

Gwangju lacks enough jobs for its population of around 1.5 million. In 2017, a net 8,200 residents left the city, two-thirds of whom were in their 20s and 30s. This makes employment a top priority for the city.

Gwangju officials say the company would employ 1,000 workers and support a total of 12,000 employees, including those at other contractors and suppliers.

The envisioned plant would cost 700 billion won ($624 million), and the proposal calls on Hyundai to award the partnership a contract to build 100,000 compact SUVs a year, but city officials and Hyundai executives have yet to settle on all the details.

Gwangju officials initially tried to attract an electronics factory that would make parts or telecommunications equipment. Later, the plan to build an auto factory materialized, according to an official of the Korea Land and Housing Corp., an operator of the Bitgreen National Industrial Complex, where the factory would be situated.

Officials trying to put the plan together have proposed a forum where workers, Hyundai management, city residents and economists would discuss and resolve various labor-management disputes that crop up. This was an attractive proposal for Hyundai, which has had to deal with union demands for wage hikes as well as strikes.

The project is not an original idea. In 2001, Volkswagen set up a vehicle manufacturing company called Auto 5000 in the city of Wolfsburg, where the automaker is headquartered. At the time, German manufacturers were relocating plants in lower-wage countries, swelling the ranks of Germany's unemployed.

To alleviate some of the pain, Volkswagen, through Auto 5000, hired 5,000 workers, offering them a monthly salary of 5,000 marks, 20% less than Volkswagen's ordinary wage. Kia's existing plant in Gwangju. The unions of Hyundai and Kia are vehemently opposed to the plans for a new factory.

By creating Auto 5000, Volkswagen was able to sidestep the unions, realize a sizable wage reduction and keep some jobs in Wolfsburg.

Gwangju is modeling its plan on the Wolfsburg arrangement. And while it is promising to kick in housing and other subsidies to help ensure a certain standard of living, it still has to deal with the strike threat.

At Kia's plant in Gwangju, the labor union in November expressed strong objections to the low-wage plan. In a statement, the union warned of a strike to "crush" the plan that it says threatens the welfare of 30,000 workers.

So the battle lines are drawn, and time is running out. The administration of President Moon Jae-in, which has put job creation at the top of its agenda, has included support measures for the plan in its draft budget for fiscal 2019. Moon wants the budget enacted early this month. But if no agreement comes by then, central government funding will fall by the wayside.