Thailand keeps its cool while Turkey and Argentina hit hardest The Turkish lira has plunged sharply as prospects for a U.S. interest rate hike have grown.   © Reuters

The Turkish lira and the Argentine peso have each depreciated 15% to 20% against the dollar over the past month alone, with their values scraping record lows. Weak finances and fiscal discipline make these countries vulnerable to capital flight as interest rates rise in the U.S.

To curb the peso's slide and the resulting inflation, the Argentine central bank raised its policy rate to 40% from 27.25% in late April and early May. Turkey increased rates 3 percentage points to 16.5% at Wednesday's emergency meeting of its central bank. But currency stability will come at some cost to the real economy as high interest rates ripple outward.

Thailand, meanwhile, has seen the baht appreciate against the dollar. The country runs a current-account surplus in excess of 10% of GDP, with inflation in the 1% range. Indonesia hiked interest rates slightly this month in tandem with the U.S. as it tried to stave off an Argentina-style currency collapse. 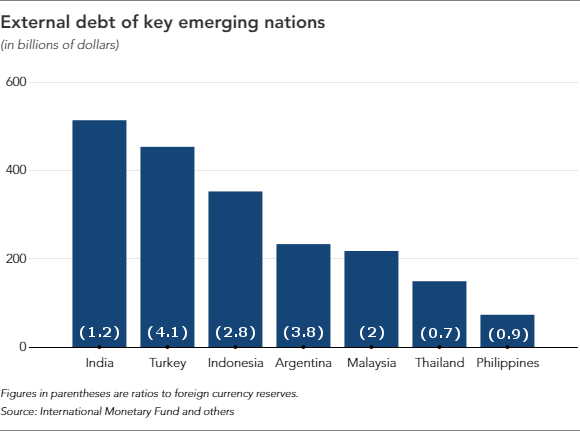 Except for Argentina and a few others, the finances of emerging countries are improving, according to Robert Waldner, chief strategist for fixed income at Invesco.

Many nations' troubles stem from steep dollar-denominated debts. Dollar debts of nonbank borrowers in emerging markets have more than doubled over the past decade, recently reaching $3.6 trillion, according to the Bank for International Settlements. This is a result of extensive post-crash monetary easing by the U.S. Federal Reserve that sent a wave of cheap dollar financing into the global market.

Dollar obligations are growing as a share of GDP as well as in absolute terms, placing a heavier burden on emerging economies. In this environment, countries that let their own currencies weaken unchecked see the real value of these debts increase -- and, eventually, a higher risk of default. As American rates climb higher, currency depreciation could spread across emerging economies, putting even relatively healthy countries in a financial bind.