MRT Jakarta expects to carry up to 378,000 passengers daily once the second phase of its network starts operating in 2025. The indonesian government estimates the economic cost of the city's traffic jams to amount to 65 trillion rupiah a year. (Photo by Bobby Nugroho)
SHOTARO TANI, Nikkei staff writerMarch 19, 2019 12:35 JST | Indonesia
CopyCopied

Initially, the line will only stretch 15.6 km from South Jakarta to the city center, but its opening marks the culmination of 30 years of on-and-off efforts to deal with the city's chronic traffic problems.

Moreover, it is one of several attempts being made in the region to combat an unwanted side effect of its rapid economic growth -- the Indonesian government estimates that congestion costs the city up to 65 trillion rupiah ($4.6 billion)a year.

The project was shelved for large periods due to difficulties over land acquisition and funding constraints. President Joko Widodo breathed new life into the plan in his time as Jakarta governor, and construction resumed in 2013.

The president has been keen to get the first phase finished before the presidential election in April in order to champion it as a major achievement.

For most people in Jakarta, however, the effect on their daily commute is of far greater importance than Widodo's re-election bid. 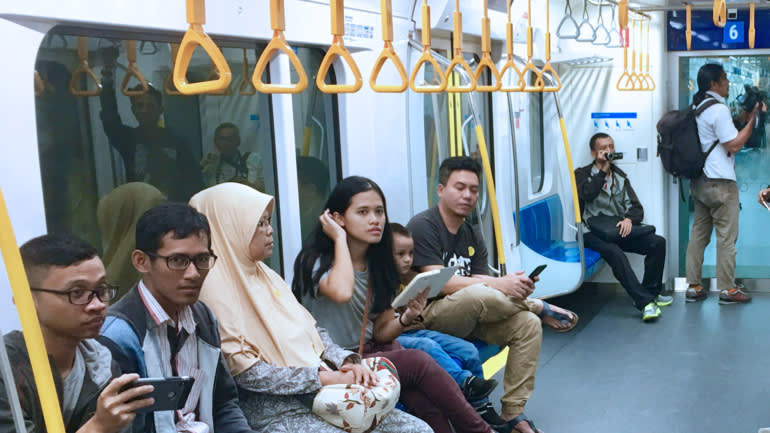 Passengers go for a test ride on the new mass rapid transit system in Jakarta. (Photo by Bobby Nugroho)

"I am so happy for the MRT," said Haminudin, one of 4,000 residents who got to ride on its first public test run on Tuesday. Living in the south of city, it takes the 42-year-old an hour and a half to get to his office in the center and two hours to get home.

"This is a transport revolution. When it is fully operational, I will use it every day," he said.

The line will operate from 5 a.m. to midnight every day, running every five minutes during rush hour. The operator expects to carry up to 378,000 passengers daily once the second phase, which will stretch a further 8.1 km to North Jakarta, starts running in 2025. Ticket prices are yet to be announced, as the Jakarta parliament is still debating how much it will contribute in subsidies.

The Indonesian capital is renowned as having one of the worst traffic problems in Southeast Asia. According to research by Boston Consulting Group and U.S. ride hailing company Uber, Jakarta experiences a 79% increase in travel time during peak hours, above the Asia average of 67%.

A survey carried out by Castrol showed that cars in Jakarta stop and start 33,240 in a year, one of the highest figures in the region.

In addition to the MRT, the city is set to open a section of Light Rail Transit by the end of this month, connecting the Jakarta International Velodrome in the east of the city to North Jakarta. The line was scheduled to open before the Asian Games in the city last August, but was hit by delays.

Elsewhere in the region, Vietnam is due to open its first rapid transit system when Line 2A of the Hanoi Metro starts operating in April.

The China-backed 18.7 trillion dong ($805 million) project is four years behind schedule due to delays in Beijing's disbursement of loans, and will be the first of nine lines planned for a network serving the city's eight million residents.

Ho Chi Minh City is also setting up a metro network. The first of its eight lines was originally scheduled to open in 2018, but the Japan-backed project has also faced delays, and is now set to begin operating in 2020.

The country's economic hub is home to its biggest port, which handles 50% of the country's cargo and is a major cause of traffic jams.

The congestion hinders the movement of goods to and from ports and factories around the city, slowing growth in the manufacturing sector, according to a city official. Road congestion is estimated to have cost the city $1 billion last year.

Both Hanoi and Ho Chi Minh City plan to limit the number of scooters in their downtown areas from 2030.

In the Philippines, President Rodrigo Duterte's government is doubling down on railway projects to ease congestion in Metro Manila.

In late February, ground was broken on the country's first subway. The 36 km line, which is being built with funding from the Japan International Cooperation Agency, will have 18 stations and is expected to significantly cut the travel time from northern Manila to the airport in the south of the city. The Metro Manila Subway Project is set to cost 357 billion pesos (around $6.9 billion) and is scheduled for completion in six years.

Last month, construction also began on a 38 km railway linking Manila with the capital's northern outskirts. The $2.6 billion Tutuban-Malolos railway, which is also being funded by JICA, will eventually be extended by another 50 km to Clark, a former U.S. military base that the government is converting into a city. 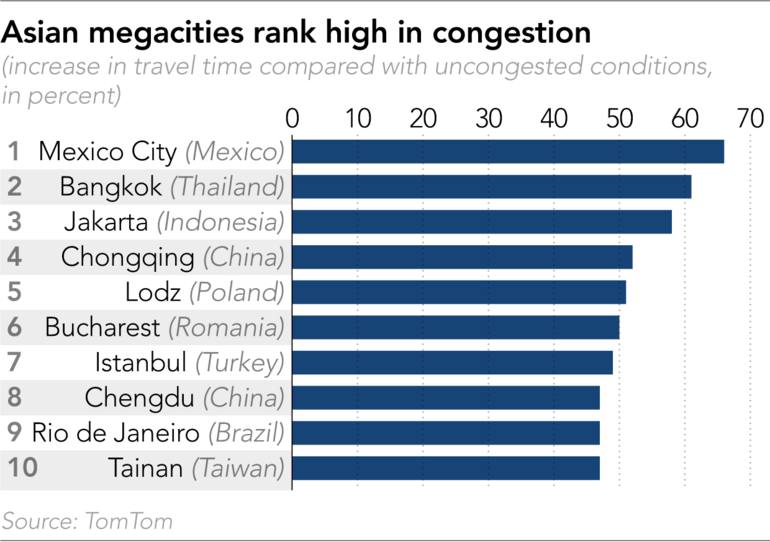 Metro Manila loses around 3.5 billion pesos ($66 billion) a day from congestion and its aging transport network, according JICA. That figure is projected to rise to 5.4 billion pesos by 2035 if the situation is not resolved.

"The advantage that rail will have [over cars and motorbikes] is that because these SEA cities are so badly congested, rail is going to offer a better travel experience," said Walter Theseira, a transport economist at Singapore Universtity of Social Sciences.

However, "as initial networks will not be very comprehensive, private motorbike and car travel will still be very popular because rail simply won’t meet many travel needs at first," he added. "It will take time and the development of the rail network to bring down market share of private travel."

Theseira pointed out how London, despite its comprehensive public transport system, continued to experience congestion in the city centre until it introduced a congestion charge zone.

"These policies cannot be implemented until sufficient public transport capacity and quality exists to provide a reasonable substitute," he added.

Cliff Venzon in Manila contributed to this article.