Manufacturing index up 6.2% for first half as companies diversify bases MANILA -- Manufacturers in Southeast Asia are ramping up production at an accelerating pace as rising labor costs in China continue pushing companies to move in.

The manufacturing production index compiled by the Japan Center for Economic Research shows 6.2% year-on-year growth for five key Southeast Asian countries as a weighted average for the January-June period, just shy of China's 6.9%.

The index compares production volumes against a base period and indicates manufacturing activity.

Strong exports and firm domestic demand are spurring manufacturing activity in the region. Production there could surpass China's depending on the direction of the ongoing trade war between Washington and Beijing.

The five countries -- Indonesia, Thailand, Malaysia, the Philippines and Singapore, constituting half the member states of the Association of Southeast Asian Nations -- recorded a collective 4.5% increase for all of 2017. Their growth has been continuing since 2015, while China has been in a decelerating trend since a 2010 peak of 15.7%.

The Philippines' index rose 13.8% in the first half amid an infrastructure push from President Rodrigo Duterte's government, a turnaround from 2017's yearly decline of 0.5%. Singapore increased 10.7%, almost the same as in 2017, while Indonesia, Malaysia and Thailand each notched growth of around 4% to 5%. Each country enjoyed healthy exports, with infrastructure projects and rising incomes supporting growth in domestic demand. 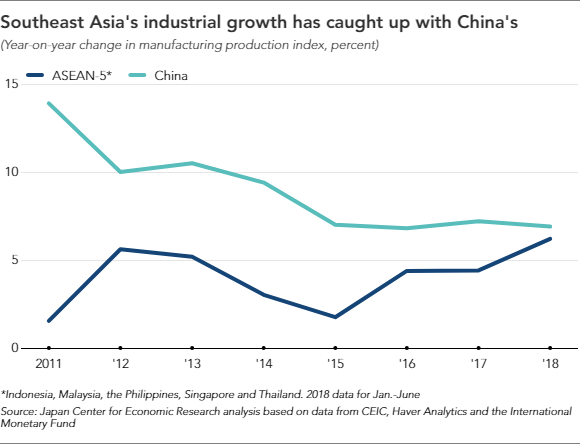 Higher labor costs in China are one factor prompting manufacturers to move production elsewhere in so-called China-plus-one strategies. German automaker BMW makes some models in Thailand, an auto industry hub, and exports to China. Labor-intensive sewing factories are shifting toward destinations with lower wages, such as Vietnam and the Philippines.

Companies also are shuffling their production networks to dodge the U.S.-China trade war. Taiwanese power components supplier Delta Electronics plans to turn affiliate Delta Electronics (Thailand) into a subsidiary to spread out its production bases, which are concentrated in mainland China and vulnerable to U.S. tariffs.

New Kinpo Group, a Taiwanese contract electronics maker, looks to build new facilities in the Philippines. The company operates factories in the mainland, but CEO Simon Shen says clients are looking more to Southeast Asia as a manufacturing base as the trade war escalates. The company also eyes boosting production in markets like Thailand and Malaysia.

Though China's manufacturing growth has slowed as it adjusts production levels for heavy industries like steel and shipbuilding, the Asian power remains far ahead of its neighbors in scale. It produced 14.06 million vehicles in the January-June half, nearly seven times the output in Southeast Asia. But that production yielded year-on-year growth of 4.2%, less than Southeast Asia's 6.6% increase.

Southeast Asia also has greatly narrowed China's lead in real gross domestic product growth. The five key countries showed a 4.5% gain in manufacturing and other secondary industries in the first half, less than 2 percentage points below the 6.1% increase for China. In 2011, China was ahead by more than 7 percentage points.

Though downward pressure on Chinese manufacturing from the trade war benefits Southeast Asia, the region's exports of parts and components bound for Chinese factories could slow.

"If the U.S. economic cycle enters a downward phase in 2019, Southeast Asia could face a slowdown as well," said Makoto Saito of the NLI Research Institute.