TOKYO -- With incomes rising and instances of terrorism falling, Southeast Asia is showing how growth can lead to stability, and stability to further growth.

Indonesia, the region's most populous country, has seen the number of terrorist attacks plummet in recent years, while the peace deal reached between the Philippine government and Muslim rebels on Mindanao in March has helped lure investors to the underdeveloped island.

Tokio Marine & Nichido Risk Consulting, a research arm of the major insurance group, gathers information on terrorism around the world. According to a survey by the company covering the years from 1995, Indonesia saw a total of 15 physical and cyber terrorist attacks in 2013, down 40% from the peak of 25 in 2011. The number is still on a downward trajectory, at five for January through July this year. Similar trend has been observed by National Consortium for the Study of Terrorism and Responses to Terrorism (START), a research and education center at the University of Maryland, College Park. With some 250 million inhabitants, 90% of whom are Muslim, Indonesia accounts for roughly 40% of the combined population of the 10-country Association of Southeast Asian Nations. Attacks by militant groups such as al-Qaida-affiliated Jemaah Islamiyah and the Free Aceh Movement, a violent secessionist campaign waged in western Sumatra, long plagued the country. The worst, however, seems to have passed.

"Leaders of Jemaah Islamiyah appear to have decided to end their armed struggle against the government several years ago as Jakarta intensified its crackdown," said Koichi Kawamura, a researcher with the Japan External Trade Organization's Institute of Developing Economies.

Economic growth enables a country to allocate more money to law enforcement, resulting in a drop in terrorist activities, according to Kenji Aoshima, a senior researcher with Tokio Marine.

According to Aoshima, the election of Jakarta Gov. Joko Widodo, a man from a modest background, as president in July could further enhance the country's stability. "Progress in democratization and the resulting social mobility could serve as a deterrent against terrorism," he said. An entrenched class system that keeps the poor trapped at the bottom of the economic pyramid leads to wide income gaps, a factor associated with a rise in terrorist activities.

While a correlation between income and terrorism has yet to be established, a 40-year global study through 2011 by Dokkyo University professor Takashi Kihara indicates that terrorist activities increase when a country's per capita gross national income rises from a very low level to around $4,000. They then subside when the figure climbs above that mark. 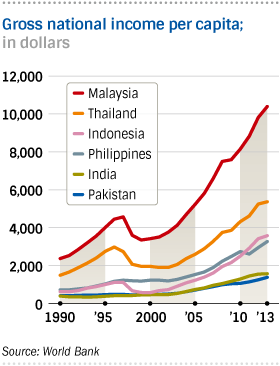 In 2013, per capita GNI in Indonesia is estimated to have been above $4,000 in many urban areas, though the overall average for the country was $3,580, according to World Bank data.

Per capita GNI in the Philippines reached $3,270 in 2013. In March of this year, the Moro Islamic Liberation Front, a separatist group on the island of Mindanao, signed a comprehensive peace accord with the government.

During the peace talks, other armed rebel groups opposed the deal being offered, and the number of terrorist attacks in the country soared 85% from a year earlier to 161 in 2013. It was the first rise in four years, but it does not appear to have reversed the overall downward trend from 2010. In the START database, the number of terror attacks in the country more than doubled in 2013.

"Terrorists in Southeast Asia are keen on closing the income gap, so religious freedom and other demands tend to take a back seat," said Keishi Ono, a researcher with Japan's National Institute for Defense Studies.

This appears to apply to the conflict on Mindanao. Infrastructure projects there have tended to benefit the Christian majority of the population, while Muslims have been given short shrift in the country's development program. The framework of the recent peace deal was in place by 2012, according to Shinobu Kikuchi, a senior researcher with Mizuho Research Institute.

In the autonomous region in western Mindanao, per capita gross domestic product was just 14,566 pesos ($333) in 2013, less than 10% of the figure for Manila. Between January and June of this year, however, government-approved private investments in the Mindanao region surged to 2.52 billion pesos, surged more than 70% from the total for all of last year.

As the peace talks progressed, businesses both inside and outside the country set their sights on the rich resources of Mindanao, including agricultural produce such as palm oil and bananas. The government has already signed off on investment deals for the construction of a production facility by a palm oil exporter, as well as projects for biomass power generation and mining, Philippine companies.

"Once security concerns are dispelled, more companies should set up shop there," Kurasawa said, citing lower personnel costs than elsewhere in the Philippines and a reasonably well-educated local population.

Japanese companies are among those trying to extend their activities into Mindanao. Mitsubishi Corp. landed an order in January for two coal-fired power plants in the island's Balingasag district, and Toyota Motor is opening more showrooms. Construction consultancy Chodai is teaming up with local company Equi-Parco Construction on power generation and other industrial projects.

On Sept. 19, Japanese, U.S. and European companies already operating in the Philippines plan to hold a seminar in Davao to explore ways to attract more investment to Mindanao. The aim is to further industrialize the island ahead of the launch of the Asean Economic Community in late 2015, a multinational endeavor geared toward further economic integration of the region. The seminar will feature a matchmaking event between Mindanao and foreign businesses.