SINGAPORE/YANGON -- Southeast Asia is at risk of a sharper economic contraction this year as coronavirus cases flare up in some countries while even those that have succeeded in containing their outbreaks are unable to bring back tourists.

Malaysia issued a two-week movement restriction order that took effect Wednesday for Kuala Lumpur and the neighboring state of Selangor, after daily new infections jumped to over 600 patients from a low in the single digits.

The partial lockdown shows how countries in the region are still struggling to balance public health precautions with the need to restart economic activity seven months into the pandemic.

When Malaysia imposed strict movement controls from mid-March through early May, economic output plunged 17.1% in the April-June quarter compared with a year earlier.

This time, companies are allowed to operate normally, indicating that the government looks to minimize the economic impact. People line up to pay at a supermarket after Malaysia's government announced that it will impose some restrictions on movement in Kuala Lumpur and in the neighboring state of Selangor.   © Reuters

But schools and entertainment venues are closed, and no more than two people per household are allowed to shop for daily necessities. People will leave their homes less frequently, leading to an inevitable spending decline.

Issac, who runs a few restaurants at major shopping malls in Klang Valley, said revenue fell to "30% to 40%" of pre-pandemic levels during the previous movement control order.

Malaysia is not the only country in the region that is suffering.

Myanmar, which recently reported more than 2,000 new cases in a single day, has ordered businesses in Yangon to keep workers at home. The directive exempts certain essential industries, such as food and medical supplies.

"Sales have dropped to half of normal," said a woman who sells vegetables at a local market. 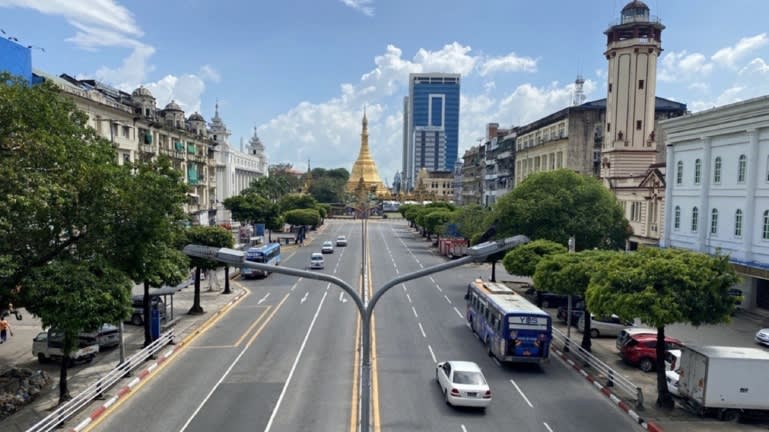 Traffic on Yangon's normally busy roads has evaporated under government restrictions on movement, a measure to prevent the spread of the coronavirus. (Photo by Yuichi Nitta)

Emerging economies in the East Asia Pacific region, excluding China, will shrink 3.5% this year, the World Bank projected in an October 2020 regional outlook published in September.

Myanmar and Malaysia are looking at further economic deterioration due to their growing number of coronavirus cases. The most recent estimate by the World Bank shows Myanmar's economy growing by just 0.5% this year in the baseline scenario, but the institution also forecasts a 0.9% contraction in the worst-case outlook.

Meanwhile, the Philippines and Indonesia, where COVID-19 cases have topped 340,000 each, "face the prospect of an uneven and volatile economic recovery," the report said.

The malaise has afflicted even countries that have kept a lid on infections. Thailand has recorded fewer than 4,000 cases, but authorities have restricted the arrival of foreign tourists out of fear of a second wave of infections.

Tourism contributes 20% to Thailand's gross domestic product directly and indirectly. Though other economic activity has mostly returned to normal, lackluster tourism threatens to tip Thailand into a worse annual economic downturn that the one caused by the 1990s Asian financial crisis.

Singapore and other countries in the region have held out hope that so-called travel bubbles -- agreements between countries where COVID-19 cases have ebbed -- can restart much-needed flows of tourists and businesspeople.

Foreign ministers from members of the Association of Southeast Asian Nations agreed in September to encourage "the maintenance of necessary interconnectedness in the region by facilitating, to the extent possible, the essential movement of people, including business travels." But a large-scale resumption of travel would be impractical during a resurgence of infections.