SM Group and its Indonesian partner aim to open 10 Alfamart convenience stores -- like this one in Metro Manila -- in the Philippines every month. (Photo by Kimberly dela Cruz)
Economy

Cross-border alliances give global rivals a run for their money

JAKARTA -- With their bright red and yellow signage, the Alfamart convenience stores sprouting up in Manila and other Philippine cities are hard to miss. But what really sets them apart is their parentage: In a market dominated by Japanese brands like 7-Eleven, Ministop and FamilyMart, the Alfamart chain is run by a unique alliance of Indonesian and Philippine companies.

While the Alfamart name is little known to the outside world, some 13,000 of the stores are scattered throughout Indonesia -- more than triple the total number of convenience stores in the Philippines. The chain's founder, Djoko Susanto, started out helping his parents run their mom and pop shop. He built his chain of minimarkets, as they are known locally, by focusing on the most profitable products and selling them at the lowest prices.

As budget-conscious Indonesians flocked to his stores, he rapidly expanded the chain nationwide -- a task one retail executive called "a logistical nightmare," given the lack of infrastructure in farther-flung municipalities.

The Philippines is an archipelago with similar challenges. And Susanto's minimarket operator, now called Sumber Alfaria Trijaya, or SAT, smelled opportunity. In 2014, it partnered with Philippine conglomerate SM Investments, the largest local retailer. "The expansion really is [focused] on the provinces," said SM Investments President Frederic DyBuncio. "We have aggressive plans to grow together with our Indonesian partner."

SAT aims to increase the store count from the current 270 in the Philippines to more than 400 by the end of the year.

With a combined population of 600 million, growing economies and abundant natural resources, Southeast Asian markets are considered ripe opportunities for established multinationals. Increasingly, however, companies in the region are opting to partner up with neighbors. Investment within the Association of Southeast Asian Nations bloc stood at $22.1 billion in 2015 -- equivalent to about 18.5% of the total investment inflow in the region.

Chandra Asri was established in the late 1980s by a son of Suharto, the late Indonesian president, and associates. The company was hit hard by the Asian financial crisis, and its initial foreign partner, Japanese trading house Marubeni, sold its stake by 2005.

Indonesia's domestic petrochemical industry has lagged behind those of Singapore and Thailand, according to Kulachet Dharachandra, vice president of operations. "We share technical expertise, operational know-how, because SCG has been through this -- a lot of expansion and debottlenecking."

Chandra Asri booked a record $300 million net profit in 2016, helped by the expansion of its naphtha cracker and improved market conditions. It started building a factory to produce synthetic rubber -- a raw material for tires -- with French tire maker Michelin last year and is now eyeing a second ethylene complex that could cost up to $4 billion.

A number of factors are fueling the rise of intraregional alliances.

The ASEAN Economic Community is designed to let goods, people and capital flow freely within the bloc. But partners in individual markets are still crucial for companies seeking a regionwide scope. "The partnership model is relatively unique to Southeast Asia, which has vast differences in languages and regulatory requirements," said Allan Schulte, a Bangkok-based partner at U.S. consultancy Bain & Co.

Then there is the growing financial muscle of Southeast Asian companies. In late 2016, Indonesia's Star Energy won the tender for Chevron's geothermal assets in the country, estimated at around $3 billion -- outbidding Japanese trading houses in the process. Much to the surprise of industry watchers, Star Energy led an all-ASEAN consortium, including Ayala Corp., a Philippine conglomerate, and EGCO, a Thai power producer.

Another factor is chemistry. Many of the bloc's largest companies are family-owned conglomerates. These companies tend to disclose little information about themselves, creating a significant obstacle for multinationals, whose own internal standards demand extensive due diligence on prospective partners. On the other hand, owners with similar priorities -- such as succession planning -- generally make quick progress once they have established trust.

As Anthoni Salim, the CEO of Indonesian conglomerate Salim Group, once put it in an interview: "In ASEAN we get married in six months; in Japan, maybe six years."

Still another driver is economic development. Companies in more mature markets, like Singapore and Thailand, are keen to tap the higher growth rates of their neighbors. More recently, the same has become true of companies in Indonesia and Malaysia, which have faced economic slowdowns in recent years.

The regional alliances are starting to become a threat to multinationals. Uber Technologies, the U.S. ride-hailing app valued at nearly $70 billion, has found itself in a fierce battle with Singapore's Grab, which works with regional partners such as Indonesia's Lippo Group. Chandra Asri is gearing up to take on Lotte Chemical Titan, a unit of South Korean conglomerate Lotte group, which is also planning to build a $4 billion petrochemical complex in Indonesia.

For the most part, ASEAN alliances have yet to brave the elements of the global market. Many Southeast Asian industries are protected by nationalistic policies that give local players an edge. Indonesia, for example, still restricts foreign ownership of small retail stores, making it harder for Japanese convenience stores to compete with Alfamart.

"There aren't many good examples now," said Bain's Schulte, "but in three to five years, maybe we can see Southeast Asian companies that compete globally." 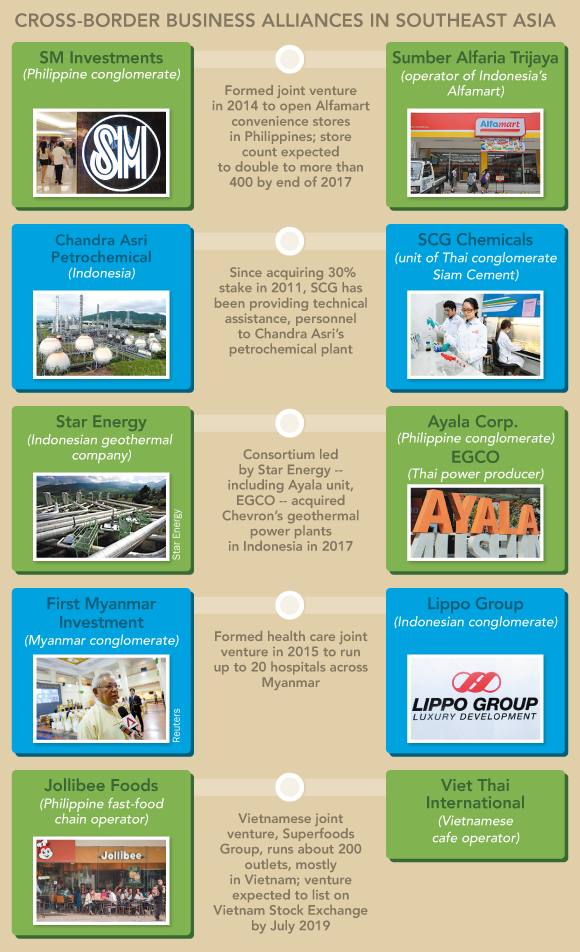 Nikkei staff writers Cliff Venzon in Manila and Yukako Ono in Bangkok contributed to this story.