SINGAPORE -- The Thai baht has been trending higher recently, lifted by an improved external balance due to a rapid increase in current-account surplus. At first glance, a strong baht may hint at robustness in the Thai economy, but it is also the result of slumping domestic demand.

After its monetary policy committee met on Feb. 8, the Bank of Thailand issued a statement saying: "Some appreciation of the baht against major trading partners' currencies ... might not be as beneficial to the ongoing economic recovery."

The government did intervene in the market. Due in part to the baht selling, the country's foreign reserves in December were up 10% from a year earlier. As Thailand's policy rate is already low, the central bank is unlikely to cut interest rates to curb the currency's appreciation. 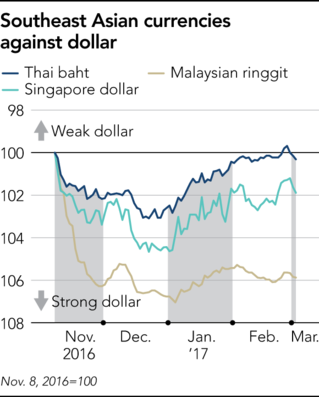 The raising of U.S. interest rates after the presidential election on Nov. 8 has caused Asian currencies to drop. Some have rebounded since the start of the year thanks to President Donald Trump's comments aimed at curbing dollar's appreciation. But the currencies of Indonesia and Malaysia -- which have concerns over their political and economic fundamentals -- as well as that of Singapore have been trending lower than levels prior to the election.

Meanwhile, the baht hit its highest level against the dollar since last October on Feb. 28. Accordingly, it also rose sharply against the currencies of neighboring countries.

Hiroshi Inagaki, senior economist at Mizuho Research Institute, said Thailand's current-account surplus jumped more than 40% on the year in 2016, pushing up the currency.

The increase has been put down to sluggish domestic demand. Thailand was already suffering from slumping consumer sentiment due to factors such as an aging population. The mourning period after the passing of King Bhumibol Adulyadej dealt it a further blow.

As imports marked a year-on-year decrease in 2016, Thailand's current-account surplus rose rapidly, despite the fact that exports remained roughly flat.

An improved external balance is a byproduct of falling imports. Still, if market watchers reckon Thailand's economic base is stronger than those of its rival Asian countries, the baht could attract more buying than its economic strength and have a negative effect on exporters' earnings

For example, the stock prices of some exporters, such as Kulthorn Kirby, a manufacturer of compressors for air conditioners, and canned tuna processor Thai Union Group, have remained sluggish.

A strong baht also has a negative impact on tourism in the form of higher costs for foreign visitors. Last year, the Thai authorities clamped down on so-called zero-dollar tours, which lure tourists with extremely low tour costs and charge them unreasonable fees in league with contracted souvenir stores and service operators, resulting in a sharp decline in Chinese tourists.

The strong baht will also put downward pressure on share prices of tourism-related stocks, such as hotel operators Minor International and Erawan Group.

During the Asian currency crisis in the late 1990s, Thailand -- at the time saddled with current-account deficit -- saw its currency become an easy target for hedge funds. Having learned the lessons, the Thai government strengthened its economic base and boosted foreign reserves.

The country is, however, facing the new challenge of a stronger currency more than neighboring countries. The government is trying to increase public investment to help boost domestic demand, such as through transport improvements, and curb an excessive increase in current-account surplus.

Improved external balance is good news, but an excessive appreciation of the baht could spell trouble for the country's already slowing economy.