JAKARTA -- A string of better-than-expected earnings announcements by Indonesia's top companies is lifting hopes that the country is pulling out of the protracted growth funk that has disappointed markets. 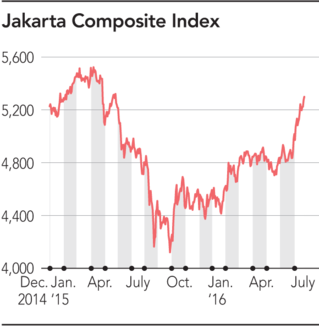 "Broadly speaking, this is first [time] in the past five to six quarters that so far, we are seeing a better set of numbers," said Jahanzeb Naseer, head of Indonesia research at Credit Suisse. 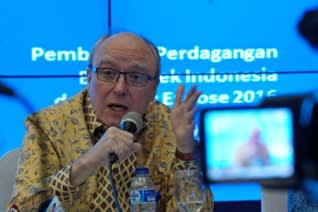 Eugene Keith Galbraith, vice president of Bank Central Asia, said Friday he expects Indonesia's economy to be “much better” in 2017.

Hopes for an economic rebound lifted the benchmark Jakarta Composite Index to a fresh 14-month high Thursday. Shares in Unilever Indonesia, the index heavyweight, hit an all-time high of 47,800 rupiah ($3.60) after the consumer-goods company reported a 13% rise in net profit. The company has the top market share in such products as shampoo, toothpaste and ice cream. The benchmark index declined 1.6% on Friday amid a broad sell-off in Asia's emerging markets.

Hanjaya Mandala Sampoerna, Indonesia's largest listed company and a subsidiary of U.S. cigarette giant Philip Morris, reported a 23% increase in net profit. Cigarettes are considered a major indicator of consumer spending in Indonesia, which has one of the region's highest smoking rates among adult men.

"It feels like things are getting better," Eugene Keith Galbraith, vice president of Bank Central Asia, said at a public conference Friday. The country's largest private lender posted a 12% increase in net profit on higher interest income, which was driven by a 20% rise in corporate loans. "It feels like the sentiment is improving, and the policy framework is getting clearer. We expect next year to be much better."

Conglomerate Astra International reported a 12% decrease in net profit due to weak contributions from its financial and heavy equipment divisions. But its core automotive business, which accounts for about half of the group's revenue, showed signs of improvement by logging a 4% increase in car sales to 273,000 vehicles. "Steady performances are expected from the consumer finance and automotive businesses," President Prijono Sugiarto said in a press release.

Analysts have long been searching for signs of a pickup in Indonesia's economic growth, which has been declining since 2011 amid slumping commodity prices and a volatile currency market. They initially had high hopes for the economic reforms promised by President Joko Widodo when he took office in October 2014. However, those expectations were dimmed by controversial policies and delays in government spending. For the January-March period, gross domestic product increased less than 5% year on year, slower than the previous quarter.

To streamline his reform efforts, Widodo announced a sweeping cabinet reshuffle on July 27, which included the appointment of World Bank Managing Director Sri Mulyani Indrawati as finance minister. Indrawati, popular among investors for her reform efforts during her tenure as finance minister under the previous administration, is tasked with boosting tax revenue to fund the government's ambitious infrastructure development plans.

While signs of an economic pickup are appearing, some investors remain skeptical about the country's longer-term prospects. Most analysts attributed part of the earnings boost to the earlier start in June of Ramadan, the Islamic holy fasting month, during which spending tends to rise. Matahari Department Store, which generates approximately 30% of its revenue during Ramadan, reported a 79% surge in net profit during the January-June period. A reactionary fall may be seen for the July-September quarter.

Some companies' performances fell short of expectations. On Thursday, S&P Global Ratings downgraded the credit rating of Lippo Karawaci, a major property developer, saying, "Lippo's property sales will likely be much lower than we earlier anticipated in the first six months of 2016."