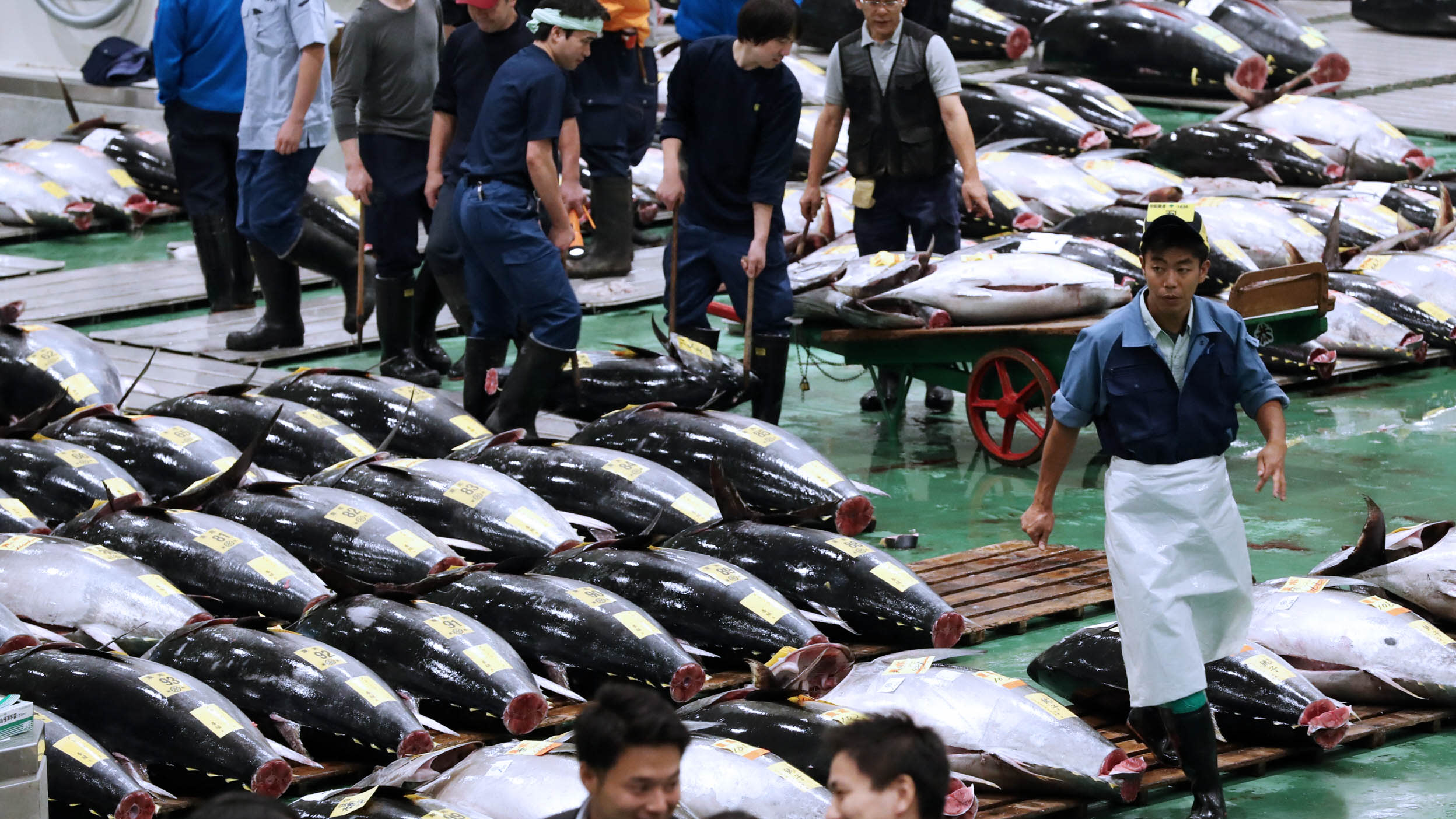 TOKYO -- The successor to Tokyo's famed, bustling Tsukiji fish market opened its doors for business for the first time Thursday, kicking off operations with a tuna auction.

The new market is located in the waterfront district of Toyosu, roughly 2 km southeast of the 83-year-old former site, which closed its doors on Oct. 6.

The opening bell chimed at 5:30 a.m. to announce the start of the first auction, followed by the same cacophony of voices that rang out for decades at Tsukiji.

"I will work with you to improve the market and make Toyosu better recognized as a brand," said Tokyo Gov. Yuriko Koike, before the auctions began.

Relocating operations to the new site involved a frenetic five days of activity. At one point, the market's iconic 1,800 electric carts had to make their way there in a slow-moving convoy along a road not yet open for public use.

The new market was built at a cost of about 600 billion yen, and occupies a total area of 40 hectares -- 70% larger than Tsukiji.

Unlike the environment at Tsukiji, which had a roof but otherwise was an open-air market, the facility in Toyosu is in a temperature-controlled building that houses an auction floor and wholesale markets, enabling cold-chain logistics.

However, not all aspects of the move have gone according to plan. Commercial, lodging and other facilities meant to attract tourists and boost the new market's public profile were originally scheduled to open at the same time as the fish market, but construction has been pushed back to after the 2020 Tokyo Olympics following a dispute between the project manager and the city government. The market itself was originally slated for a November 2016 opening.

A total of 492 wholesalers moved over to the Toyosu market, while 32 decided against continuing to operate by relocating, according to an informed source. The costs required for the move and a lack of successors proved too much for some.

With supermarkets and other retailers increasingly opting to form direct supply arrangements with producers, operations at wholesale markets are in decline. Of the 10.5 trillion yen worth of food products destined for the consumer market in Japan, just 6.7 trillion yen worth now go through wholesalers. For seafood, 48% of what hits the consumer market skips wholesale transactions.

The Ministry of Agriculture, Forestry and Fisheries considers development in logistics as crucial to revitalizing the sector. That view will be put to the test by what Koike has described as a "cutting-edge market" at Toyosu, which will also serve as an export base for agricultural products.