Super skyscraper completions to rise 60% in 2018

China leads in constructing ultra high-rise buildings, but market is set to cool TOKYO -- The world is binging on skyscrapers. About 230 towers worldwide, each at least 200 meters tall, are slated for completion this year.

This marks a 60% increase from 2017, with China accounting for 60% of the total and Southeast Asia and the Middle East are also big builders.

Driving the building spree are growing Asian economies and their young populations. But the rapid pace has caused concerns about underlying risks, with some experts forecasting a slowdown in or after next year, depending on China's property market bubble.

The number of ultra high-rise office buildings, condominiums, hotels and others -- structures of about 40 stories or more -- projected for completion in 2018 is based on data compiled by the Council on Tall Buildings and Urban Habitat.

The figure, which is set to increase for the sixth consecutive year, is expected to bring the total number of ultra high-rise buildings in the world to more than 1,500 at the end of the year. That is up threefold from 2008 after the collapse of Lehman Brothers triggered a global financial crisis.

Leading the boom is China, where about 130 buildings are due to be completed in 2018, an increase of 70% from the preceding year. Construction has spread from big cities like Beijing, Shanghai and Hong Kong to cities near them, as well as inland cities. Construction can be seen in Shenzhen, home to many technology companies like Huawei Technologies, and in Shenyang, a city in northeastern China, where manufacturing companies are proliferating.

The country is home to nine of the 10 tallest buildings in the world due for completion in 2018. The tallest will be Beijing's China Zun building at 528 meters, a symbolic landmark that is expected to attract a number of multinational companies as tenants.

The lowest of the top 10 will stand 343 meters high, but will still overshadow Osaka's Abeno Harukas, Japan's tallest building at 300 meters.

Outside China, Asia will see nearly 40 other ultra high-rise buildings completed this year, up slightly from 2017. Kuala Lumpur, Taipei and Bangkok are all experiencing an increase in skyscraper construction, while three building are scheduled for completion in Mumbai and other Indian cities.

In the Middle East, about 30 skyscrapers are being built, including a number in Dubai.

The sharp increase in high-rise construction reflects Asia's stellar economic performance. The region's emerging economies are expected to grow 6.5% in 2018, significantly higher than the world's projected growth of 3.9%, according to the International Monetary Fund.

Since corporations began establishing manufacturing bases in the region, Asia has been tagged as the "world's factory," pushing domestic wages up and stimulating demand.

Asian populations are relatively young, with many young people flocking to cities in search of jobs. This has fueled demand for offices and homes.

However, the accelerating pace of property development is causing concern, as this year's figure of ultra high-rise buildings due for completion includes many that were supposed to be done last year.

But Asia could see outflows of investment if interest rates in the U.S. rise as expected and the dollar appreciates against major currencies. Meanwhile, in the Middle East, property development will be affected by the price of crude oil and other resources.

The number of super skyscrapers worldwide scheduled for completion in 2019 is estimated at about 170, and will likely fall to 80 or so in 2020.

Another concern is how China's property bubble will play out. Until 2015, the government had encouraged housing construction in an attempt to stimulate the economy. But as rising property prices drew public ire, Beijing tightened controls. In 2017, amid soaring prices and cost of both materials and labor, a number of construction projects failed to be completed on time. 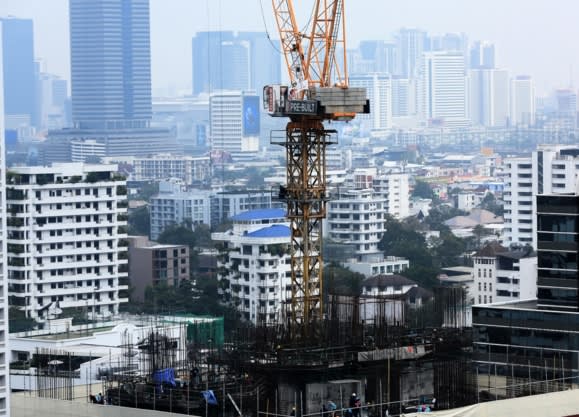 Growing economies are driving Asia's thirst for ultra high-rise buildings like this one under construction in Bangkok. (Photo by Ken Kobayashi)

On the other hand, demand for office buildings has remained stable, supported by strong business performance, says Kaori Yamato of Mizuho Research Institute.

As for Japan, no super skyscrapers are scheduled to be completed this year, the risk of earthquakes having dampened demand for ultra high-rise buildings.

Still, a number of high-rise projects are slated for completion after 2020 Olympics in Tokyo in response to easing of regulations -- including restrictions on floor-area ratios -- implemented in special strategic zones.

In fiscal 2027, Mitsubishi Estate, owner of the Marunouchi Building and other properties near Tokyo Station, plans to construct a building 390 meters high near the station.