TOKYO -- Japan's current-account surplus has grown for the first time in four years, government data showed Wednesday. The nation's finances were aided by falling crude oil prices and the first positive travel balance in decades, thanks to an influx of foreign tourists. 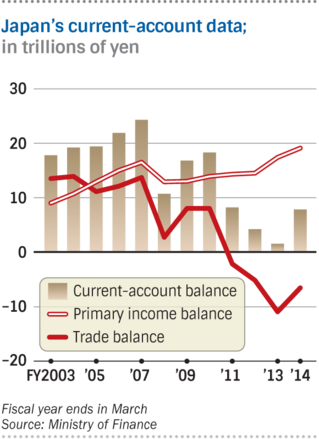 The surplus in the current account -- one of the broadest measures of a country's international trade -- hit 7.81 trillion yen ($64.6 billion) in fiscal 2014, which ran through March, according to a preliminary Ministry of Finance report.

The current account had been deteriorating since fiscal 2011. This was partly attributable to the devastating March 11, 2011, earthquake and the nuclear disaster that followed.

Japan reported a surplus of 18.26 trillion yen in its current account in fiscal 2010, but in fiscal 2013 it was down to 1.47 trillion yen. After shutting down its nuclear power plants due to safety concerns, the nation was forced to import more fossil fuels.

The current account improved as Japan's trade deficit declined. The deficit came to 6.57 trillion yen in value terms, down by 4.44 trillion yen from the previous year. The value of imports inched up by 1.8%, thanks in part to cheaper crude oil, while that of exports grew 8.4% on the back of economic recoveries in the U.S. and elsewhere.

The deficit in Japan's service balance stood at 2.81 trillion yen, down by 634.6 billion yen on the year. The travel balance surplus came to 209.9 billion yen, the first black ink since 1959 and a sharp turnaround from a 530.4 billion yen deficit in fiscal 2013.

The country welcomed a record number of international visitors in fiscal 2014 -- about 14.67 million -- leading to more spending by tourists within its borders. By contrast, the number of Japanese who went abroad decreased, partly as a result of the yen's depreciation. Japanese travelers, consequently, spent less overseas. 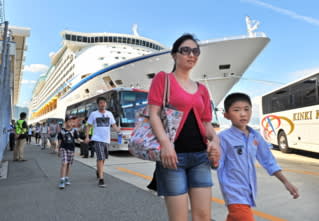 Chinese tourists disembark from a cruise ship in Kobe. An influx of foreign travelers helped Japan improve its service balance.

Japan also posted a surplus of 1.97 trillion yen in the balance of fees for intellectual property and other rights in fiscal 2014 -- the most since fiscal 1996, when tracking of comparable data began. This helped to improve the service balance.

The surplus in the primary income account, which reflects how much Japanese companies earn from overseas investments, rose by 1.75 trillion yen to 19.13 trillion yen -- the highest level since fiscal 1985, the earliest possible date for comparison. This increase stemmed from higher dividends and interest as well as increased profits on securities investments.