Executives earn about 75% less than their U.S. counterparts

TOKYO -- Japan Inc. may be shortchanging some key executives. Outside board members in Japan seem to be underpaid, considering that they are now expected to play a central role in the reform of the country's corporate governance.

To be sure, Japanese these directors work shorter hours than their U.S. and European counterparts, but they are increasingly becoming more closely involved in management while assuming weightier responsibilities.

One survey showed that Japanese outside directors are paid on average about 75% less than their U.S. counterparts. This has prompted some companies to begin improving their working conditions. Department store operator J. Front Retailing, for example, is now considering introducing stock-based compensation for these executives. 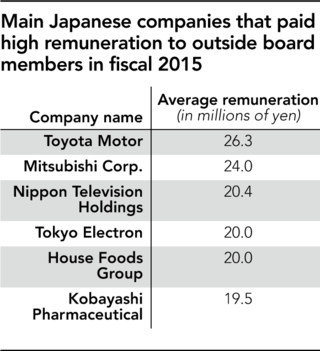 Not surprisingly, smaller companies tend to pay less, with 5% of the 119 companies paying less than 1 million yen annually to these directors.

One of the main reasons for the gap in compensation appears to be working hours. A survey conducted by the Tokyo office of Egon Zehnder, a consultancy familiar with corporate governance, showed that Japanese companies spend about 24 hours annually on board meetings. U.S. companies spend roughly twice that.

But outside board members in Japan are now shouldering a growing workload, as they are expected to become more closely involved in management as members of so-called nominating and compensation committees. A growing number of companies are forming these committees to discuss personnel affairs of executives and remuneration.

An outside director at a major bank explained, "The [bank's] auditing committee is held nearly 20 times a year [to check whether operations are being performed appropriately]. I have great responsibility, compared with my remuneration."

Some major Japanese companies compensate their outside board members as generously those in the U.S. and Europe. Toyota Motor and Mitsubishi Corp., for example, pay well over 20 million yen to their outside directors. But it is the lower compensation at smaller companies that drive down Japan Inc.'s average.

A senior official at the Japan Association of Corporate Directors explained, "If remuneration is too low, the role of supervising the [company] leadership they (outside directors) have to play could be neglected."

"The levels of both outside directors' performance and their remuneration commensurate with their performance must be enhanced," he added.

He also said, "The appropriate remuneration level varies depending on the size of a company or the industry it belongs to. But I think around 10 million yen is a reasonable overall average amount."

Some Japanese companies are now trying to improve the working conditions of outside board members. J. Front Retailing actively listens to the views of these executives, and its management team and outside directors attend a training seminar once a year. The company is considering adding stock-based compensation for outside directors in order to encourage them to become more deeply involved in management; the reasoning being that if the company performs better, its stock price will rise, resulting in higher remuneration.

However, some claim that giving company shares to outside board members "undermines the independence of outside directors." Takeda Pharmaceutical introduced the system last year, but a relatively high percentage of the shareholders, 24%, objected to the move at a shareholders meeting in June 2016.

It appears that while some domestic investors opposed Takeda's move at the meeting, many overseas investors supported it, as they are open to improving the working conditions of these executives.

Hideaki Tsukuda, leader of Egon Zehnder's Tokyo office, said that debate will further intensify over remuneration hikes and payment methods in Japan amid the growing importance of outside board members.