YANGON -- When Aung San Suu Kyi's National League for Democracy was swept into power in 2015, economic development was a key priority and the fledgling government's social and environmental stance seemed tailor-made for foreign investors.

But few foresaw the complexity of adhering to core environmental principles while also dragging a long-neglected economy into the 21st century.

Now, power shortages have led to debate over the country's energy mix and the government seems resigned to accepting greater reliance on fossil fuels, sparking large protests in the country.

Chronic power shortages are one of the biggest obstacles to attracting foreign investment for Myanmar.

"I had hoped to start off making simple products," said the chief executive of a Japanese midtier maker of chemical products on a recent visit. "But considering the current capability of power supplies, it would not be realistic yet."

Companies are wary of interruptions to production or, worse still, damage to machinery resulting from a sudden blackout.

Anyone who does persevere needs to set up their own emergency generators to guarantee an uninterrupted supply. That cost, however, cancels out any savings made on the country's inexpensive manpower and other Southeastern Asian economies remain a safer, more cost-effective option.

Suu Kyi's government is well aware of the impasse and senior members of the NLD have become increasingly vocal about developing coal plants, despite the party's long-held environmentalist stance. Htein Lwin, permanent secretary of the Ministry of Electricity and Energy, insisted that if the country has a ''clean" coal option, the Myanmar people "should accept it, otherwise we have no other way."

"Clean coal technology is quite expensive, but it will be a faster way to gain access to electricity for the regions which are not connected to the national grid," said Win Htein, a member of the NLD central executive committee.

The Yangon region's Chief Minister Phyo Min Thein pointed out that his country has been left behind in the field of high-tech coal power generation. " We need to consider cheap electricity generation," he said.

Protecting the environment has been a central pillar of the NLD's ideological stance and there remain strong objections from within the party, but the leadership seems to be gravitating toward prioritizing economic development.

Senior party members now claim they are looking to strike the right balance between promoting growth and protecting the environment. They are examining overseas examples, such as an advanced thermal coal plant in Yokohama, south of Tokyo.

Electricity consumption in Myanmar has doubled over the past five years. Maximum power demand in May this year came to 3,070 megawatts. According to a power load forecast made with assistance from the Japan International Cooperation Agency, demand in 2020 could be somewhere between 3,860MW and 4,530MW, and the load could further expand to as much as 14,540MW in 2030.

By that time, the country's economy will be significantly more industrialized, and far more people will have access to electricity. Currently, Myanmar's household electrification rate stands at around 30%.

The growing demand will have to be met by one or a combination of three options -- hydroelectric, natural gas or coal.

The mountainous northern regions have abundant water resources and, once they start operating, hydroelectric stations would be able to provide a reliable, low-cost power source. But building a dam has obvious environmental, not to mention social, implications and that kind of development is likely to take at least five to 10 years.

In addition, one planned location is close to an area controlled by an armed group and its feasibility remains uncertain. A China-led dam project in Myitsone was suspended under former President Thein Sein, and has remained on ice since then.

Natural gas would offer a cleaner solution than coal. Paradoxically, Myanmar has a wealth of natural gas resources, but would have to spend huge amounts to build the infrastructure and import expensive liquefied natural gas from abroad if it were to develop the sector. 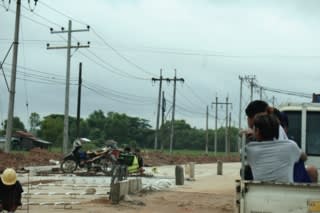 At present, the country produces 2 billion cubic feet of natural gas a day at four offshore fields. But only 20% goes to domestic consumption, while the rest is exported to China, Thailand and elsewhere.

High-quality thermal coal would still have to be imported from places like Indonesia -- Myanmar's reserves are of poor quality not suitable for efficient generation. The encouraging factor is that coal prices are less volatile than those of LNG, which typically follow oil price trends.

Citizens, especially people living near planned coal plant locations, have made their feelings perfectly clear. Their protests have grown so powerful that all of the 10 or so planned projects have been halted. Environmentalist groups have been extremely vocal and meetings draw thousands of protesters that the government can no longer ignore.

Recent noises supporting coal power generation made by senior NLD figures may just be an attempt to gauge popular reaction.

Businesses are also understandably concerned. Even with a strong push from the government, "Political risks cannot be removed overnight," said an executive of a local energy company.

Electricity rates present another huge challenge. The government has sought to help the sector through subsidies so that power can be supplied at a reasonable rate to businesses and consumers.

But with the current situation, the electricity sector can neither make enough profit nor spend on enhancing supply infrastructure. "We need to raise electricity rates," an industry source said.

The government has been receptive to the idea of raising charges. But to achieve the desired outcome, it will be households -- which account for about half of consumption -- that bear the brunt.

Wary of losing support before the next general elections scheduled for 2020, Myanmar's first democratically elected government is notoriously slow at taking action and a bold decision on energy policy is not likely to come any time soon.