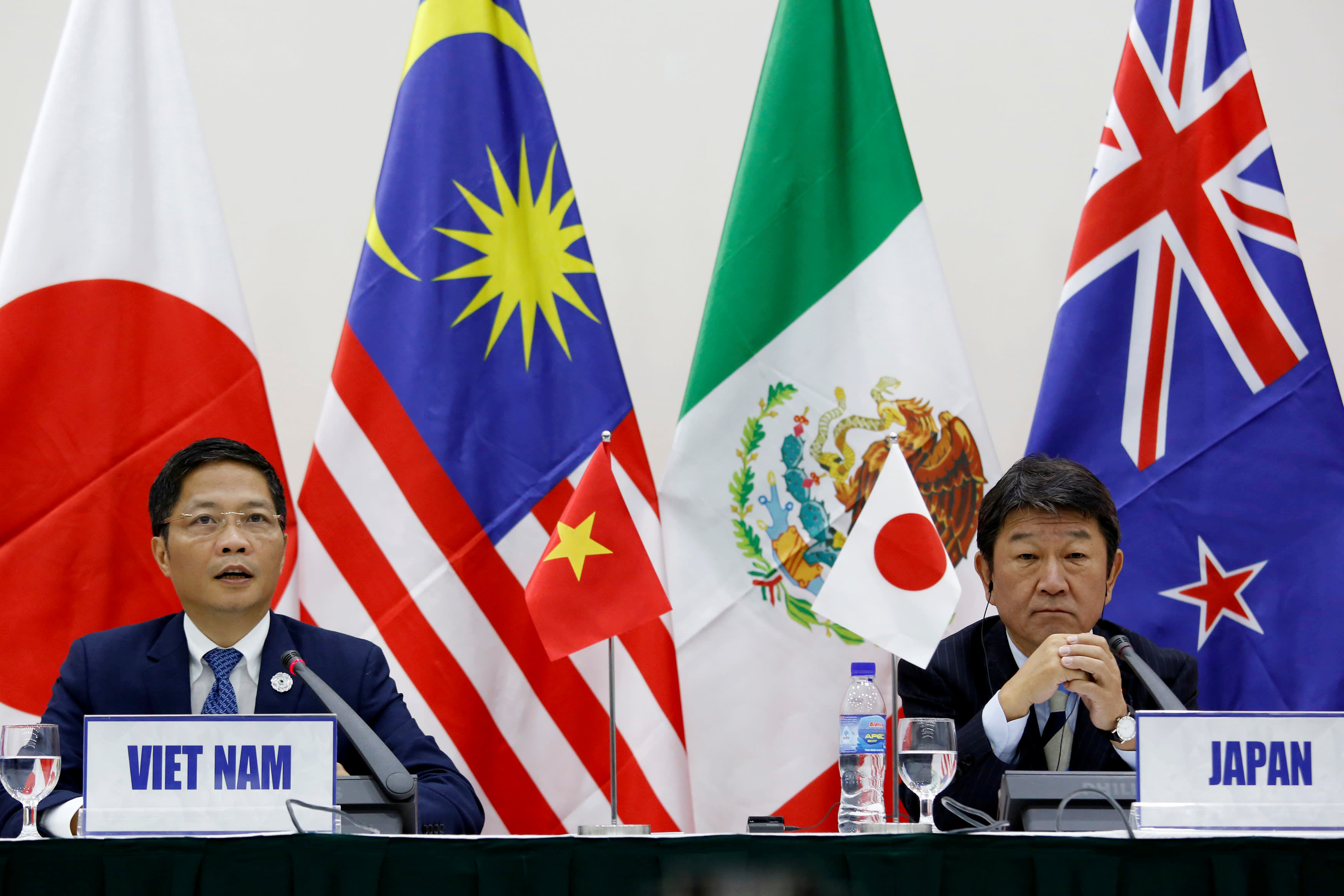 Members aim to ratify and sign by next spring, despite absence of US

DANANG, Vietnam -- Trade ministers from the 11 Trans-Pacific Partnership nations officially agreed on key aspects of the trade pact on Nov. 11, a decision they hope will shape the future of business in the Asia-Pacific region for years to come, despite the absence of the U.S. from the agreement. The signatories aim to sign the document by next spring.

After each country clears the necessary domestic procedures, the agreement is to take effect by 2019, creating an unprecedentedly expansive, multilateral free-trade agreement covering the entire Asia-Pacific region.

In their joint statement, the 11 countries said: "Ministers are pleased to announce that they have agreed on the core elements of the Comprehensive and Progressive Agreement for the Trans-Pacific Partnership."

The statement stressed that the agreement maintained "the high standards, overall balance and integrity of the TPP," while ensuring the interests of all participants and "preserving our inherent right to regulate, including the flexibility of the parties to set legislative and regulatory priorities."

The ministers agreed to suspend 20 provisions from the original TPP agreement, 11 of which are related to intellectual property. This includes provisions concerning the data protection period on new biologics (medical products derived from natural sources) and an extension of the copyright period.

"The initial agreement spans 8,000 pages, and the fact that we were able to limit the suspension list to 20 means that we were able to keep the high standards set by the initial TPP agreement," Japan's Economy Minister Toshimitsu Motegi told reporters at a press conference on Nov. 11. "I think this will be a strong message for not only Asia but [for] other regions in the world."

Vietnamese Industry and Trade Minister Tran Tuan Anh echoed Motegi's comments. "The results reached at Danang will facilitate trade development and promote more effective economic integration," he said. "All members reached [agreement] on a number of important basic matters such as maintaining a high quality TPP, which meet the benefits and interest of all members."

The 11 countries aim to hold the signing ceremony as early as next February, after which they will start their respective domestic ratification processes. The Japanese government expects to submit bills to the Diet during the 2018 ordinary session, at the earliest. The agreement will take effect 60 days after at least six -- the majority -- of the countries complete their process at home.

The ministers thought they had reached an agreement in principle on the TPP on Nov. 9, and member nations' leaders were set to officially approve that accord the following day. But Canadian Prime Minster Justin Trudeau told his Japanese counterpart Shinzo Abe that he felt the deal was not yet ready for an official decision, forcing the leaders to postpone their meeting.

The TPP ministers managed to bridge the remaining gaps during negotiations throughout the night of Nov. 10, leading to the official agreement announced on Nov. 11.

Because of time constraints, leaders of the 11 nations will not hold a summit on the new regional agreement. But as with the earlier iteration of the TPP that included the U.S., the trade pact does not necessarily need leaders' blessings for an official agreement, requiring only a sign-off from the respective trade ministers. U.S. President Donald Trump pulled his country out of the TPP agreement in January. The remaining member nations will begin their domestic ratification process next year.