With the Trans-Pacific Partnership nearly a done deal, the RCEP is back in focus

TOKYO -- Trade negotiators from the 11 Trans-Pacific Partnership countries will gather in Japan from July 17 to July 19 to hammer out procedures for accepting new members into the bloc, among them Thailand, Indonesia and possibly the U.K.

The TPP-11, as it is known, will significantly change the region's trade dynamic, despite the absence of the U.S., which pulled out after President Donald Trump took office.

Japan completed domestic procedures to ratify the trade-liberalizing agreement among 11 Pacific Rim countries on July 6, becoming the second country after Mexico to do so.

The countries signed the TPP-11 deal in March. The agreement comes into force when six member countries ratify it, paving the way for the creation, possibly by the end of the year, of a huge free trade zone that accounts for 13% of the world's gross domestic product and 15% of global trade.

Since Washington's departure, the Asian members have become the group's core. Besides Japan, four countries of the Association of Southeast Asian Nations -- Singapore, Brunei, Vietnam and Malaysia -- have joined the pact. Other ASEAN members are also looking to join.

Thailand is one of them. When Japan's Economic and Fiscal Policy Minister Toshimitsu Motegi visited Thailand in early May, Thai Deputy Prime Minister Somkid Jatusripitak told him that Bangkok was eager to join the TPP-11. Somkid asked Motegi to support his country's bid.

Indonesia is another ASEAN member that has expressed interest in joining. During his June visit to Japan, Indonesian Vice President Jusuf Kalla said Jakarta will decide within about a year. 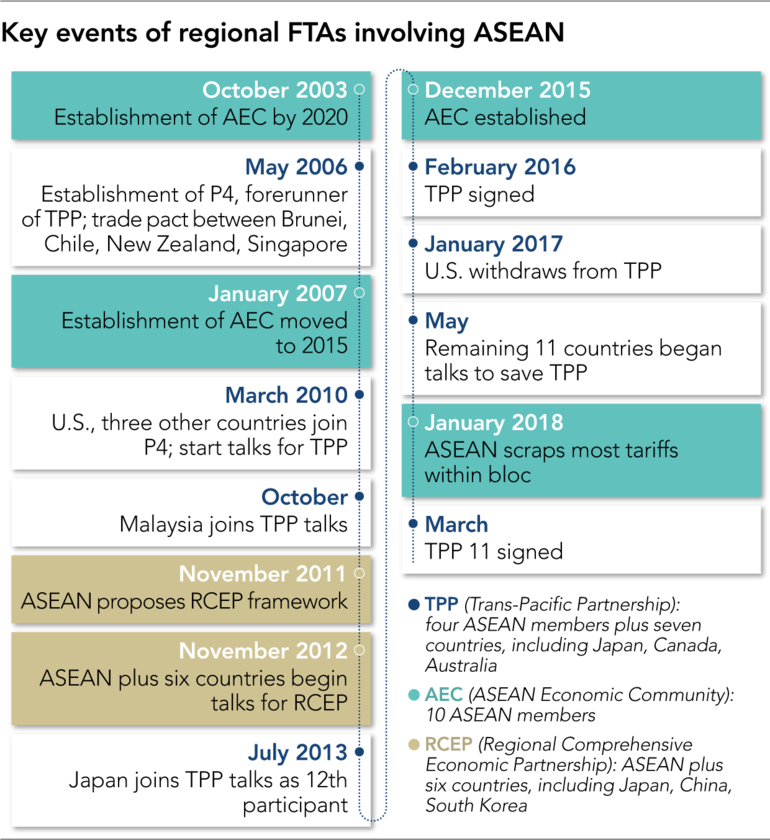 But will the trade pact really benefit these Southeast Asian countries?

In addition to being part of the ASEAN Economic Community, however, these ASEAN countries already have bilateral free trade agreements with such TPP signatories as Japan, Australia, New Zealand and Chile.

The only TPP participants with which these ASEAN nations have not struck FTAs are Canada and Mexico, and Peru in some cases. These countries receive only 1% to 4% of the exports from the ASEAN members.

The U.S. pullout reduced the clout of the trade accord. America is a major export market for these Southeast Asian nations, accounting for 10% to 20% of their exports, but only Singapore has a bilateral FTA with the world's largest economy. For ASEAN members, the primary reason for being part of the trade pact was greater access to the lucrative U.S. market.

Some Southeast Asian nations have unsuccessfully tried to strike FTAs with the U.S. Jakarta agreed with Washington to a preliminary study for a bilateral FTA in 1997, but the Asian financial crisis torpedoed efforts. Thailand and Malaysia began FTA talks with the U.S. in 2004 and 2006, respectively, but negotiations fizzled because of unworkable U.S. demands.

But the situation began to change in the wake of the 2008 global financial crisis. The U.S. -- ground zero of the crisis -- decided to change its economic policy to make growth less dependent on domestic consumer spending and more on exports.

The administration of former President Barack Obama set its sights on Asia, the growth center of the world. Obama announced in early 2010 a plan to double U.S. exports over time and initiated TPP talks with seven other Pacific Rim nations. The negotiations lasted six years while the number of participants increased, until a deal was reached among 12 countries in February 2016.

But Trump, who took office in January 2017, immediately yanked the U.S. out of the agreement. Trump's decision almost collapsed the TPP as ASEAN members had little incentive to remain in the pact, which required them to push through painful domestic reforms without the benefit of access to the U.S. market. 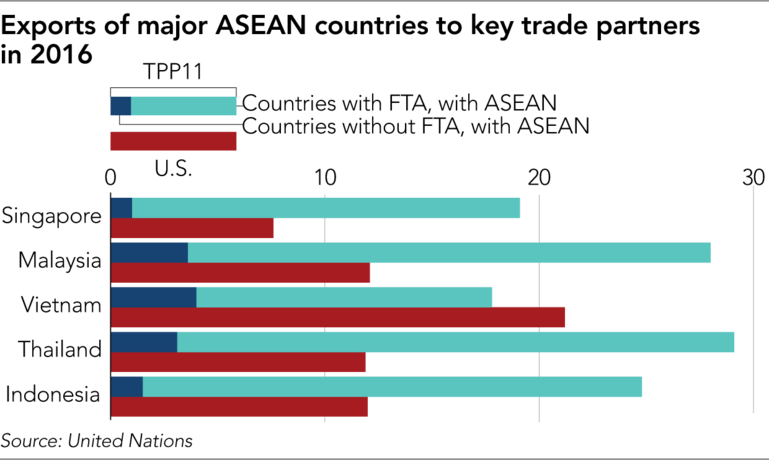 Malaysia and Vietnam opted to stay in the agreement, while Thailand and Indonesia warmed to it. There are two reasons for this.

One is the adjustments that have been made to lower the bar for entry into the pact. Of original provisions for joining, 20 have been put on ice. Most of these were requirements introduced by the U.S. Suspending these rules has made it easier to keep the pact alive.

One provision suspended in response to a Malaysian demand concerns state-owned companies, while Vietnam has been freed from a labor-related requirement. As for Thailand, its major concern was an intellectual property requirement about extending the terms of pharmaceutical patents.

During Thailand's FTA talks with the U.S., a similar requirement was criticized at home. Critics argued that it would prevent production of low-priced generic drugs, delivering a blow to low-income earners.

Under pressure from its domestic pharmaceutical industry, the U.S. successfully demanded that the requirement be included in the TPP. The suspension of this provision has removed the primary obstacle to Thailand's participation.

The other factor that has made the TPP-11 attractive for ASEAN members is that it gives participants an edge in attracting foreign investment.

Since the TPP has such broad rules for international trade and investment, including not only the scrapping of import tariffs but also rules concerning intellectual property and e-commerce, the pact will boost its appeal to foreign investors, according to Hirotoshi Ito, a senior economist for Asia at the Japan External Trade Organization.

"By pushing through domestic reforms to comply with TPP rules, a participating country can make its investment environment look better to foreign investors and boost its power to lure foreign investments," Ito said.

Thailand and Indonesia are now keen to join because they want to avoid losing to ASEAN counterparts that are already in the race to attract foreign money.

The TPP has also given rise to another regional trade agreement initiative: the Regional Comprehensive Economic Partnership.

An Indonesian diplomat has said the RCEP is more important for his country than the TPP.

The RCEP is a regional trade agreement among the 10 ASEAN members plus Japan, China, South Korea, India, Australia and New Zealand. The idea was first proposed by ASEAN during the East Asia Summit in November 2011. The envisioned trade bloc would be responsible for 29% of global trade, twice as much as the TPP-11.

ASEAN was reluctant to embrace such a large regional free trade agreement. It already had a bilateral FTA with six key trade partners. The bloc also had an interest in maintaining the status quo, with its status as a free trade hub intact. The situation put ASEAN in a stronger position than many countries to attract foreign investment.

But the TPP has put strong pressure on ASEAN to change its policies. In 2011, when ASEAN proposed the RCEP, Canada, Mexico and Japan announced their decisions to join the TPP.

ASEAN feared that it could end up losing its leadership as the core of a regional free trade zone.

The TPP has forced ASEAN to adopt the second-best option of promoting a large regional free trade agreement in Asia, notes Kazushi Shimizu, a professor at Kyushu University.

Negotiations over the RCEP are facing rough going. But top trade diplomats from the 16 RCEP nations agreed in their Sunday meeting in Tokyo to try and conclude the pact by the end of the year. They were united by concerns over a global trade war triggered by the Trump administration threatening punitive tariffs.

The TPP and the RCEP need to serve as bulwarks against the rise of protectionism due to Trump's trade agenda.

Ironically, the U.S., which led the negotiations for the TPP and previously championed unfettered trade, has become the principal threat to free trade, pushing Asia toward protective regional pacts.