TPP talks to get going -- with notable absentee TOKYO -- The 11 remaining signatories to the Trans-Pacific Partnership will start talks  next week aimed at putting the trade agreement into force, without the participation of the U.S. Lead negotiators gather in Canada to begin the new talks on May 2-3.

As the largest economy of the 11, Japan will look to take the lead, aiming to ensure that the rules concerning tariffs and trade remain intact.

Tokyo also sees the TPP without the U.S. as a way to avoid bearing the brunt of President Trump's diplomatic offensive to strike bilateral trade deals. One of Trump's first actions as president was to withdraw the U.S. from the accord negotiated under the administration of President Barack Obama.

Keiichi Katakami, Japan's deputy minister for foreign affairs, has been chosen as the country's lead negotiator for the fresh talks.

Katakami was head of the foreign ministry's economic affairs bureau when Japan joined the U.S.-led TPP negotiations in 2013.

The choice of someone so well versed in the original negotiations reflects the desire of Prime Minister Shinzo Abe's administration to secure a leadership role.

The Japanese government has also built up a system for effective communications and coordination among the ministries that were involved in the TPP negotiations.

The ministries of trade, agriculture, transport and several others will send officials to monitor remarks made by other countries in each area.

The U.S. accounts for over 60% of the combined gross domestic product of the 12 original signatories, while Japan's share is just under 20%. 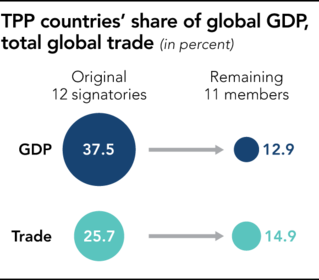 While Japanese officials regarded the TPP as a defacto free trade deal between Japan and the U.S., Tokyo believes the pact can still offer significant benefits even without Washington's participation, as long as the rules agreed upon are maintained without any big changes.

The accord, for instance, will improve the investment climate for Japanese companies in certain fast-growing Asian countries through the easing of restrictions on foreign investment and reduction of policies that favor state-owned conpanies.

Vietnam, Malaysia and a number of other participants have agreed to scrap restrictions on foreign investment in areas like financial services, telecommunications and retail.

Japanese retail giant Aeon spent four years preparing for expansion into Vietnam in 2014 because of the country's strict regulatory environment. TPP rules would significantly reduce the work foreign retailers have to do to start doing business in countries with such restrictions.

Another major benefit of the TPP concerns online businesses such as cloud computing services. The pact is the first multinational agreement on trade rules for e-commerce. It will make it much easier for providers of web-based services to start business in the other markets covered.

Japan has been calling for the same advanced trade rules to be included in other regional trade agreements, such as the Regional Comprehensive Economic Partnership and the three-way accords among Japan, China and South Korea.

Tokyo hopes that the TPP, even without the U.S., will provide leverage in its trade talks with China.

The Abe government's decision to keep the TPP alive was prompted by the Trump administration's pressure for a quick bilateral deal.

During the preparatory talks for the first round of Japan-U.S. economic dialogue, held in Tokyo on April 18, Kenneth Juster, deputy assistant to the president for international economic affairs, who leads the U.S. side, pressed for bilateral negotiations to produce substantial results within three months.

The document released at the end of the first round of economic dialogue did not set a specific time frame but Washington's posture alarmed Tokyo.

"If the TPP disappears, there will be nothing we can use to counter pressure from the U.S.," a government official said after the dialogue. "It is vital for us to keep the pact alive."

As the Trump administration has indicated a willingness to allow Japan to pursue a scaled-back TPP while simultaneously holding bilateral talks with the U.S., the Japanese government has adopted a strategy of using the pact as a means to ease the impact of Washington's diplomatic pressure.

The Abe administration is betting on persuading the U.S. to eventually return to the table, and sees preserving the trade rules as an incentive for the U.S. to do so. There is, however, no guarantee that things will work out in Tokyo's favor.

While U.S. Commerce Secretary Wilbur Ross, who sets the trade agenda for the Trump administration, has said the North American Free Trade Agreement is the priority, another Republican policymaker has stressed that trade negotiations will also be pursued with Japan and China at the same time.

Things could move forward much faster than Japan expects.

To put TPP into force, all the 11 countries need to ratify the agreement. Some, however, are maneuvering to make changes to certain rules.

Even if an agreement is reached, it must be approved afresh by the Japanese parliament. Three years passed between Japan joining the talks and it endorsing the agreement.

"The new process may require a similar amount of time and effort," said a senior foreign ministry official.