Taiwan's gross domestic product expanded 2.98% in 2020, faster than the 2.3% of its neighbor across the Taiwan Strait. It's impressive pace in a year when the global economy was battered by the coronavirus pandemic comes as major economies across the globe are set to log annual contractions.

Taiwan's economy ended on a high note, growing 4.94% on the year in the final quarter -- its best quarterly figure in almost a decade, according to data published by Taiwan's Statistics Department on Friday.

However, Taiwan's topping of its huge neighbor is set to be brief. The government in Taipei projects an expansion of 3.83% in 2021, while the International Monetary Fund this month forecast 8.1% growth for China.

"The economic growth stemmed from the continued domestic investments from manufacturers. The production capacity continued to expand and the supply chain localization also helped. Export performance was better than expected. The decline of domestic spending is not as serious as we thought last quarter," the budget, accounting and statistics bureau said in a statement on Friday.

The island's biggest tech companies such as Taiwan Semiconductor Manufacturing Co., Hon Hai Precision Industry, and MediaTek all reported record revenues for the October-to-December quarter as well as the full-year. These companies, as well as the shift of production away from China amid the Washington-Beijing tech and trade spat, have elevated Taiwan's importance in the global supply chain for industries such as smartphones, data center servers, and automobiles.

"We have been holding the view that global demand in high-tech products would clearly support Taiwan's external demand and could cement the global position as a key provider of semiconductor down the road," Alicia Garcia-Herrero, Asia-Pacific chief economist at Natixis, said. "As such, Taiwan has crossed the finishing line for 2020 with one of its best performances in recent years, and possibly within Asia." 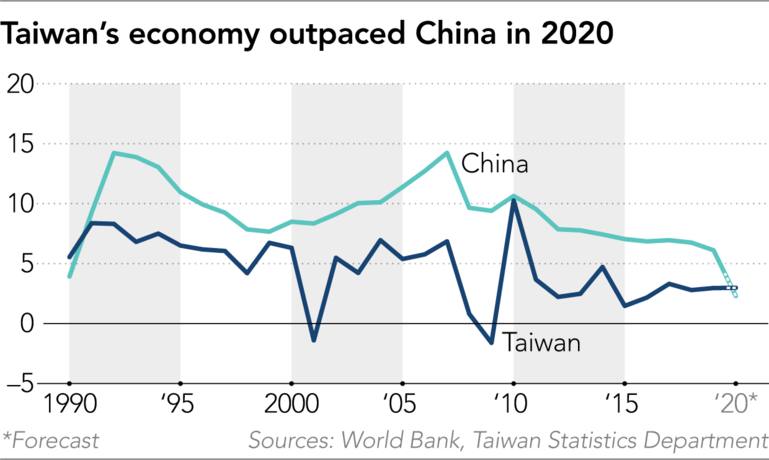 The financial hub's economy shrank 6.1% in 2020 compared from the previous year, according to an advance government reading released on Friday. This makes it one of the worst performers in Asia and steeper than the 5.9% decline during the Asian Financial Crisis in 1998.

The local economy has been battered by a surge of COVID-19 infections in the final three months of 2020, when social distancing restrictions put a further dent in spending. Gross domestic product dropped 3% in the fourth quarter from a year earlier.

Hong Kong's unemployment rate also reached a 16-year-high of 6.6% by the end of 2020. The rate is expected to continue its climb this year after the government ended a job protection scheme that helps pay up to half of employees' salaries.

In a Legislative Council meeting on Wednesday, government officials stressed the need to maintain prudent spending amid an uncertain economic environment. The city's government is set to record a massive financial deficit this year following multiple rounds of relief measures totaling HK$300 billion ($38.7 billion) to shore up the economy.

"Facing uncertainties in the internal and external economic environment, we must be prudent in public finance... and be prepared for future needs, " said Secretary for Financial Services and the Treasury Christopher Hui Ching-yu.

"Moving forward, the situation is much trickier down the road," Natixis noted in a research report. "Hong Kong has not shown any immediate signs of virus containment. The vaccine supply will also be available only in February at earliest, and this will give little immediate help for Q1 2021."