Taiwan dives into the competition for "hub" status

TAIPEI -- Taiwan is working aggressively to expand its yuan-related financial services in hopes of becoming a major offshore hub for the Chinese currency. At its disposal in achieving this goal are gargantuan trade with China, significant investment on the mainland and a large amount of yuan deposit. 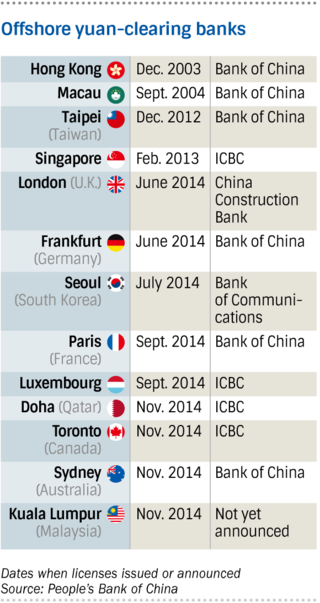 But some experts warn that without sufficient risk control, expanding the island's yuan business could threaten Taiwan's security and financial stability.

"With Taiwan hoarding hundreds of billions of yuan, especially now average citizens are also including renminbi as part of their assets, any significant fluctuation in the yuan's exchange rate may undermine Taiwan's financial stability," said Kenneth Lin, an economist at National Taiwan University.

"With the renminbi's exchange rate controlled by the government rather than decided by the free market, Beijing could wield it as a weapon. This is part of the currency war," Lin added.

But views like Lin's have not dimmed the general eagerness in Taiwan to develop the yuan business, with the financial sector actively seeking to offer more related products and setting up units in China.

When it comes to yuan trading, experts say Taiwan's advantage over Hong Kong and Singapore lies in the huge investment on the mainland by Taiwanese manufacturers, coming to more than $100 billion over the past three decades, and annual cross-strait trade of more than $160 billion.

"Taiwan's superiority over Hong Kong and Singapore is that we have close economic ties with Beijing, with our manufacturing sector heavily invested in many regions in China," said William Lai, an associate researcher with Taiwan Academy of Banking and Finance. "We get to keep a close tab on economic changes in China."

Economist Hu Sheng-cheng at Taiwan's Academia Sinica, said: "With huge bilateral trade, should the two sides decide later to clear such trade directly in renminbi, Taiwan will get a large pool of yuan, which will be beneficial for our efforts to develop yuan-related business."

Taiwan does not necessarily have to compete with Hong Kong and Singapore for the status of offshore yuan hub, according to experts, because each of the three economies has its own focus.

Taiwan's yuan business is more associated with its huge manufacturing base on the mainland, with Hong Kong serving international institutional investors and Singapore targeting private banking clients and Southeast Asian countries with demand for the yuan trade.

The yuan business in Taiwan boomed after authorities there allowed local banks to offer yuan services to individual customers in February 2013, shortly after Bank of China's Taipei branch was authorized to handle clearing of the Chinese currency on the island.

Taiwan accumulated more than 300 billion yuan ($48.7 billion) in deposits by the end of September, compared with around 1 trillion Hong Kong currently holds.

Yet for local financial institutions, lingering issues over how to repatriate the currency could hamper the growth of yuan business.

Chairman William Tseng of Taiwan's Financial Supervisory Commission, the government body responsible for overseeing financial institutions, said officials are asking Beijing to open up more ways for the yuan to flow back into China.

He said one possible solution is for China to allow Taiwanese banks to directly lend yuan to more mainland regions hosting a large number of Taiwan businesses, in addition to the Kunshan Experimental Zone in the southeastern province of Jiangsu, which obtained permission last year for cross-border yuan lending.

Currency-trade risks are also causing concern for investors and the general public. Tseng said the authorities are aware of the risks and are vigilantly monitoring relevant developments.

"We are aware of real estate and shadow banking issues in China, and we also demand that all banks track potential risk factors closely, while we conduct regular checks on financial institutions," he said.

Taiwan is not the only market where Beijing is using yuan business to increase its global clout.

Most recently, the People's Bank of China and its Malaysian counterpart signed a memorandum of understanding to establish an offshore yuan clearance bank in Kuala Lumpur. Malaysian Prime Minister Najib Razak said the deal, inked on the sidelines of the Asia-Pacific Economic Cooperation summit in Beijing on Nov. 10, will strengthen "Malaysia's position as a gateway for renminbi flows in the ASEAN region," as it will be only the second such license holder in the Association of Southeast Asian Nations. Singapore received its license in 2013.

The presence of a yuan clearance bank is expected to increase yuan liquidity in the Kuala Lumpur and Singapore, giving them an edge over other cities in the region when it comes to developing yuan-related businesses.

China's central bank has been handing out yuan-clearing licenses more freely in recent months. Until last year, it had awarded only four such licenses, to Chinese banks in Hong Kong, Macau, Taipei and Singapore. Since January, however, it has granted nine, to banks in London and Frankfurt on the same day in June, and in a similar manner to Paris and Luxembourg banks a few months later. The way the licenses were awarded seems aimed at creating competition among cities to be the regional center of yuan trading and transactions. Toronto and Seoul have also been awarded licenses, while U.S. and Japan are notably absent from the list of recipients.