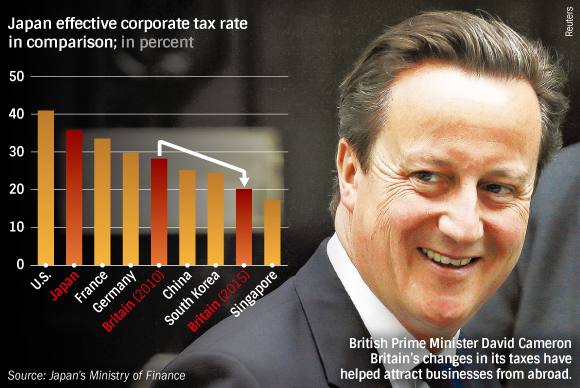 TOKYO -- Informa, the publisher of Britain's oldest weekly magazine, received approval in late May from most of its shareholders to relocate its head office back to Britain.

Informa moved its head office to Switzerland in June 2009 to avoid double taxation resulting from its growth in overseas operations. Britain's taxation system at the time had pushed the nearly 300-year-old company to move out of its home country.

British Prime Minister David Cameron's tax reforms are aimed to push the country's corporate tax rate to as low as its neighbor Ireland, and is making Britain competitive against other countries in terms of tax rates.

Worried by the flight of British companies to Ireland, Cameron launched tax reforms under the slogan that Britain would become open to businesses again.

Britain is lowering its effective corporate tax rate from 28% in 2010 to 21% this year, and to 20% in 2015. It has also worked out a series of reforms including tax breaks for companies with large patent revenues.

These reforms, which have prompted Informa and other British companies to return to Britain, are starting to attract foreign businesses as well. In early May, Sergio Marchionne, CEO of Fiat Chrysler Automobiles, said the head office of the merged company would likely be located in London, rather than Turin or Detroit, where Fiat and Chrysler are headquartered, respectively.

All things being unequal

Japan's effective corporate tax rate is, in comparison, high. In Tokyo, it is 35.64%. Yet, Japan has not seen a large flight of companies to other countries.

Among the small number companies that have left is Sunstar, which relocated its group head office to Switzerland in 2007 in connection with its management's buyout of the oral-care product manufacturer.

But a closer look at segment-by-segment operations by Japanese companies shows that there is a consistent trickling of companies leaving Japan. Mitsubishi Heavy Industries of Japan and Siemens of Germany will integrate their steel production machinery divisions in a joint venture from next January, which will be headquartered in Britain.

Although neither Mitsubishi, which will put up 51% of the joint company's capital, nor Siemens has a production base in Britain, the two companies decided to locate the new venture's office there because of the British government's plan to cut the effective corporate tax rate, among other reasons.

Tokyo Electron announced merger plans with Applied Materials of the U.S. last year. Tokyo Electron Chairman and President Tetsuro Higashi has said the holding company of the merged semiconductor equipment makers will be headquartered in the Netherlands because of the country's low corporate tax rate. The two companies looked at a number of countries, including Britain, and concluded that the Netherlands would be the "optimum" location, Higashi said.

Moves like these are not only spreading in the U.S. and Europe, but also in Asia, where Japanese businesses are seeking to expand. Panasonic, Mitsubishi Corp., Hoya and many other Japanese companies are relocating segments to Singapore, where the effective corporate tax rate is 17%.

Companies take into consideration a variety of factors, including the amount of information available, access to markets and logistics convenience, to decide where to locate their operations. In particular, countries wishing to attract businesses need attractive tax systems, including preferential taxes.

As long as companies that produce products and earn profits overseas continue to proliferate, Japan has "no other choice but to lower tax rates" to let Japanese companies stay in the country, said a lawyer who served as a tax adviser in a major acquisition deal.

As if to compete with Cameron, Prime Minister Shinzo Abe is set to lower Japan's corporate tax rates as a major pillar of his economic growth strategy. "I will issue a strong message that the Japanese economy will drastically change," he said in reference to his tax reform plans.

Such tax cuts could energize global Japanese companies, or it could drag Japan into a grueling war of tax reductions with other countries. The government needs to figure out how effectively tax cuts can help revive the Japanese economy.