TOKYO -- The threat of terrorism still looms over South Asia, despite decades of efforts to stamp it out. India and Pakistan, as well as Afghanistan, where the Taliban Islamic fundamentalist group is resuming its activities, have yet to rid themselves of the threat. Terrorist activities in India and Pakistan could hinder peacemaking efforts between the two countries. Their domestic politics are being seriously affected, as are efforts to attract foreign investment and make progress on infrastructure projects indispensable to economic development. 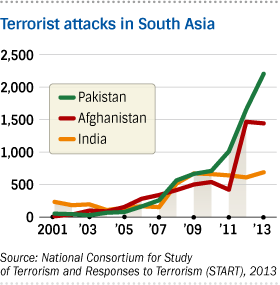 According to the South Asia Terrorism Portal, the number of deaths caused by terrorist attacks began to decline from its peak in 2001 in India and in 2009 in Pakistan. But even without considering the terrorist attacks in India's financial capital Mumbai in November 2008, it is clear that organized terrorism targeting big cities has been doing immense damage to the politics and society of the two countries.

When it comes to terrorism in India, many of the groups, including Lashkar-e-Taiba (LeT) and Jaish-e-Mohammed (JeM), are based in Pakistan and many of the attacks have been carried out by Muslim militants, many of whom have links to the international terrorist network al-Qaida. Recently, however, attacks by radical leftist guerrillas who maintain power in underdeveloped areas in eastern India, such as Maoist and Naxalite insurgents, have been responsible for the largest number of deaths.

Many of the terrorist attacks are the result of religious conflicts between Hindus and Muslims, resulting in mosques being bombed. Ethnic minorities in Assam and other areas in northeastern India are also engaging in terrorist acts to win separation or independence. Behind some of these terrorist acts are neglect by politicians who fail to address the severe poverty and underdevelopment in rural agricultural areas, as well as religious conflicts.

Whenever tension between India and Pakistan begins to ease and peace efforts gain momentum, Muslim extremists tend to become active. The Mumbai train bombings of 2006, which took 209 lives, occurred at a time when tension between the countries had begun to ease, with then-Pakistani President Pervez Musharraf visiting India the previous year for the first time in about four years. When the terror attacks occurred in Mumbai in 2008, a civilian government was formed in Pakistan and both countries began searching for ways to re-establish peace. This process has been undermined by elements in the Pakistani military and other groups that do not welcome progress in these efforts, and may be behind some of the attacks.

Although Indian Prime Minister Narendra Modi recently said, "There should be zero tolerance toward terrorism," his country's security authorities have been the target of fierce criticism. When the Delhi High Court was bombed in September 2011, it was discovered that the security cameras in the building were useless because the reception area, where the bombs were placed, was in a blind spot. Security personnel hurriedly installed 49 additional closed-circuit TV cameras immediately after the bombing.

The situation in Pakistan is even more dire. While the country is known as a staging point for cross-border terrorists attacking India, Pakistan also has a history as a victim of terrorism.

Even the military and security forces cannot quell terrorist attacks in Pakistan. Terrorists tried on multiple occasions to kill Musharraf, who also served as chief of army staff. Although the number of people who died in terrorist attacks in 2013 was less than half that of 2009, at about 5,400, peace talks between the government and Tehrik-e-Taliban Pakistan collapsed after the terrorist group attacked Jinnah International Airport in Karachi in June. In August, clashes between anti-government forces and security troops developed into bloodshed. Pakistani politics is being further disrupted as the country again faces a rise in terrorism.

Moreover, hill tribes over whom the central government has little influence control vast areas close to the border with Afghanistan, where the rugged terrain makes finding terrorists next to impossible. An executive at a major Pakistani think tank noted that the amount of money raised by Muslim charity groups, which have ties to extremists, is larger than the government's entire welfare budget. Many local residents therefore sympathize with radical Muslims, which makes suppressing terrorism even more difficult.

Unlike the situation in Pakistan, terrorism in India has done little direct damage to the economy. There are only a few cases in India where foreign-owned factories and fast-food restaurants have become direct targets of attacks. If the Modi government promotes peace with Pakistan and ramps up its operations against domestic armed groups, terrorism will certainly occur again. But now that the Indian economy has finally started to thrive, anti-terrorism measures are more important than ever.