Amid weak lending growth, banks forced to deal with rise of e-wallets Net profit fell 20.5% for state-owned Krung Thai Bank and 4.6% for Siam Commercial Bank, while Bangkok Bank and Kasikornbank reported profit increases. The lenders face growing competition from outsiders such as e-wallet operators and other financial technology companies. Conventional banks are under pressure to lower their fee income and boost marketing expenses to keep up with the digital era.

Combined total lending at the four banks grew 3.3% year-over-year in the quarter, while gross nonperforming loans increased by 11%. Krung Thai reported the only decline in lending among the four banks, citing a reduction in loans to the private corporate sector despite expansion in the government and state-enterprise sectors. 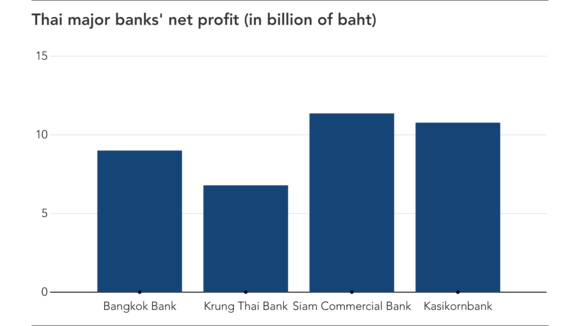 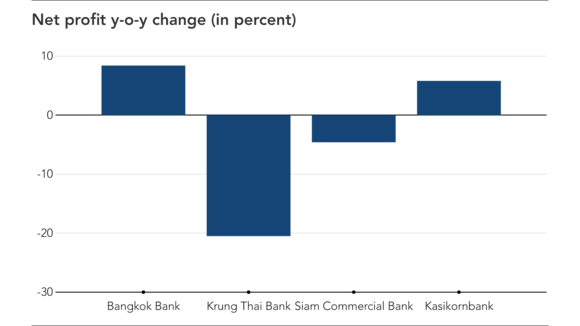 The bank, which ranks second in the country by assets, blamed this on a lending rate cut that all four big lenders carried out in May 2017. The banks lowered their minimum retail rates, which mainly are applied to small and midsize enterprises, after the finance minister called on the large lenders to narrow the interest rate gap between big and small businesses.

A majority of Thai corporations are SMEs and farmers. The government desperately wants to boost their performance in order to lift sluggish consumption and accelerate the economic recovery. Gross domestic product expanded by 3.9% last year, the country's best growth since 2012, with rosy projections topping 4% for 2018 coming from the government, central bank and analysts. 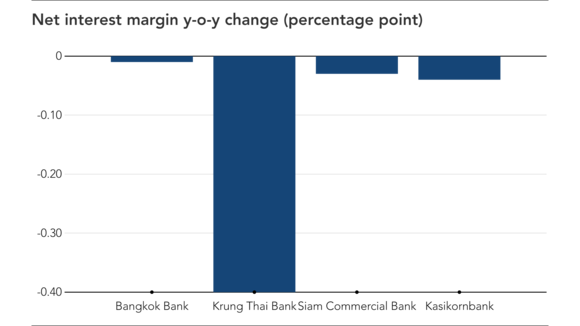 Higher investment and marketing expenses for digital banking hindered Siam Commercial Bank. But President and CEO Arthid Nanthawithaya said Thursday these efforts will pay off in the future.

"In the long run, the bank believes that mobile banking will expand with unstoppable growth and will be the source of the bank's future business opportunities," he said in a statement. The largest profit increase came from Bangkok Bank, the country's leading commercial bank by assets. Net profit rose 8.4% on the year to 9 billion baht, as lending expanded for real estate and construction as well as agriculture and mining.

The rapid adoption of online banking and payment creates new challenges for the banks. In late March, Siam Commercial announced the cancellation of fees for money transfers through online banking apps. The bank previously charged 10 baht to 35 baht per transaction for transfers to different regions or other banks. The lender hopes to encourage customers to use its mobile banking app and collect data that can be used to expand the company's consumer loan business.