BANGKOK -- Thailand's central bank on Friday introduced measures to keep the baht from further strengthening, now that the mighty currency has become an imminent threat to the kingdom's economy.

The Bank of Thailand said it will further limit the baht holdings of investors. As of now, Thailand has capped nonresidents' baht account and security account at 300 million baht ($10 million). But from July 22, it will lower the cap to 200 million in an attempt to lessen capital inflows.

Financial institutions are required to notify account holders so that they can comply with these changes.

The bank is also moving to enhance its surveillance of nonresidents' investment behavior by strengthening reporting requirements for nonresidents' holdings of debt securities.

The central bank said it has been closely monitoring the Thai currency, along with nonresidents' capital flow movements. The bank is now "concerned about the rapid appreciation of the Thai baht relative to its regional peers, as it could lead to unfavorable macroeconomic repercussions," according to a statement released on Friday.

The baht rose to 30.5 to the dollar on July 1. Speculative buying of baht by investors looking for short term profits pushed up the price to its highest level since June 2013. The central bank's hawkish monetary policy has backed these moves.

The bank in December raised its policy rate for the first time in over seven years. It is not expected to reverse the move despite expectations that other major central banks will become more accommodative in the near future. 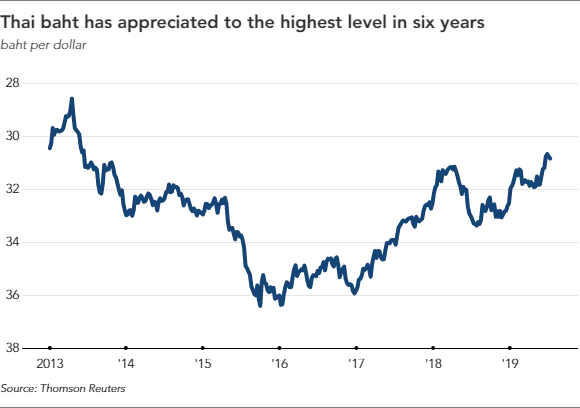 Market participants perceive that the U.S. Federal Reserve has switched to a dovish stance and will cut its policy rate at the end of July. This is chasing capital back to emerging markets, and Thailand has become investors' Southeast Asian haven of choice due to its strong economic fundamentals, including a large current account surplus.

"These measures may not cause a big outflow," said a currency dealer at a Japanese bank based in Thailand, "but will have an announcement effect for some investors to stay away from the market."

The baht quickly depreciated to 30.9 to the dollar after the two measures were announced.

Thai investments may look expensive as well when the baht is strong. However, "such measures by the central bank could cause investments to draw away from the market, anyway, as investors may get the impression that Thailand is a controlled market instead of free market," the currency dealer said.

While the measures may have stopped the baht's appreciation for the time being, they have yet to turn the market tide. Market participants see a possibility that the Fed may maintain its dovish stance even after the expected rate cut at the end of this month.

"The Bank of Thailand will continue to closely monitor the Thai baht movements as well as nonresident behaviors," the central bank said, "and stand ready to use additional measures if undesirable speculative behaviors persist."