Containers are processed at the port of Bangkok. The Thai economy expanded in 2021 after a contraction the previous year as a result of the COVID-19 pandemic.   © Reuters
MASAYUKI YUDA, Nikkei staff writerFebruary 21, 2022 10:38 JSTUpdated on February 21, 2022 12:51 JST | Thailand
CopyCopied

The turnaround followed a 6.2% contraction recorded in 2020 as a result of the COVID-19 pandemic, but it was too small to bring the economy back to 2019 levels.

The country has experienced multiple waves of COVID-19 with different variants. Its third wave last year was the most serious and involved the delta variant. The virus continued to ravage the economy by reducing private consumption and necessitating business lockdowns and travel curbs. The country also started welcoming vaccinated international visitors without any quarantine requirements from November as it shifted its COVID-19 strategy away from complete eradication to one of coexistence.

Hospitality, which accounted for about 20% of Thailand's gross domestic product in 2019, has been by far the worst affected sector of the economy. The reopening has led to a modest recovery in tourist spending, but the negative impact in the first 10 months overshadows current performance. Service exports, which include spending by nonresidents such as tourists, shrank 22.8% over the year.

"The Thai economy expanded less compared to regional peers because our economy depends quite a lot on the tourism sector," said Danucha Pichayanan, secretary-general of the NESDC, in a Monday media briefing. On the production side, manufacturing expanded 4.9% over the year, thanks to external demand. The sector slid 5.9% in 2020. The information and communication sector, as well as financial and insurance, grew 5.7%.

The NESDC maintained its economic projection for 2022 at 3.5% to 4.5%, the same as predicted in November.

Meanwhile, Thailand's GDP for the three months ending December 2021 expanded 1.9% compared to the same period the previous year. On a seasonally adjusted basis, it grew 1.8% in the fourth quarter compared to the third.

Thailand has avoided a technical recession, defined as two consecutive quarters of economic shrinkage on a seasonally adjusted basis. The economy shrank 0.9% in the three months ending September due to the delta variant. 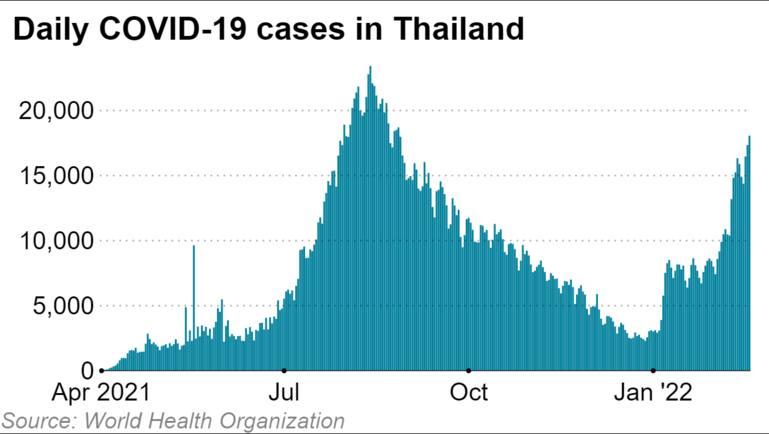 The variant could still adversely affect the economy, as cases are rising rapidly. On Monday, the country confirmed up to 18,883 new cases and 32 deaths.

The recent COVID numbers may indicate that Thailand is experiencing an outbreak well above its last peak in August 2021, if taking account undetected cases in addition to officially confirmed ones. Although omicron is less virulent than other variants, it could affect the country's productivity if it continues to spread.

The NESDC said current risks to be monitored are COVID-19 uncertainty, inflation, household debt and supply chain disruptions, such as a shortage in chips and containers.