Thai resort welcomes 1st quarantine-free tourists in over a year

Country's experiment starts on Phuket with flight from Abu Dhabi 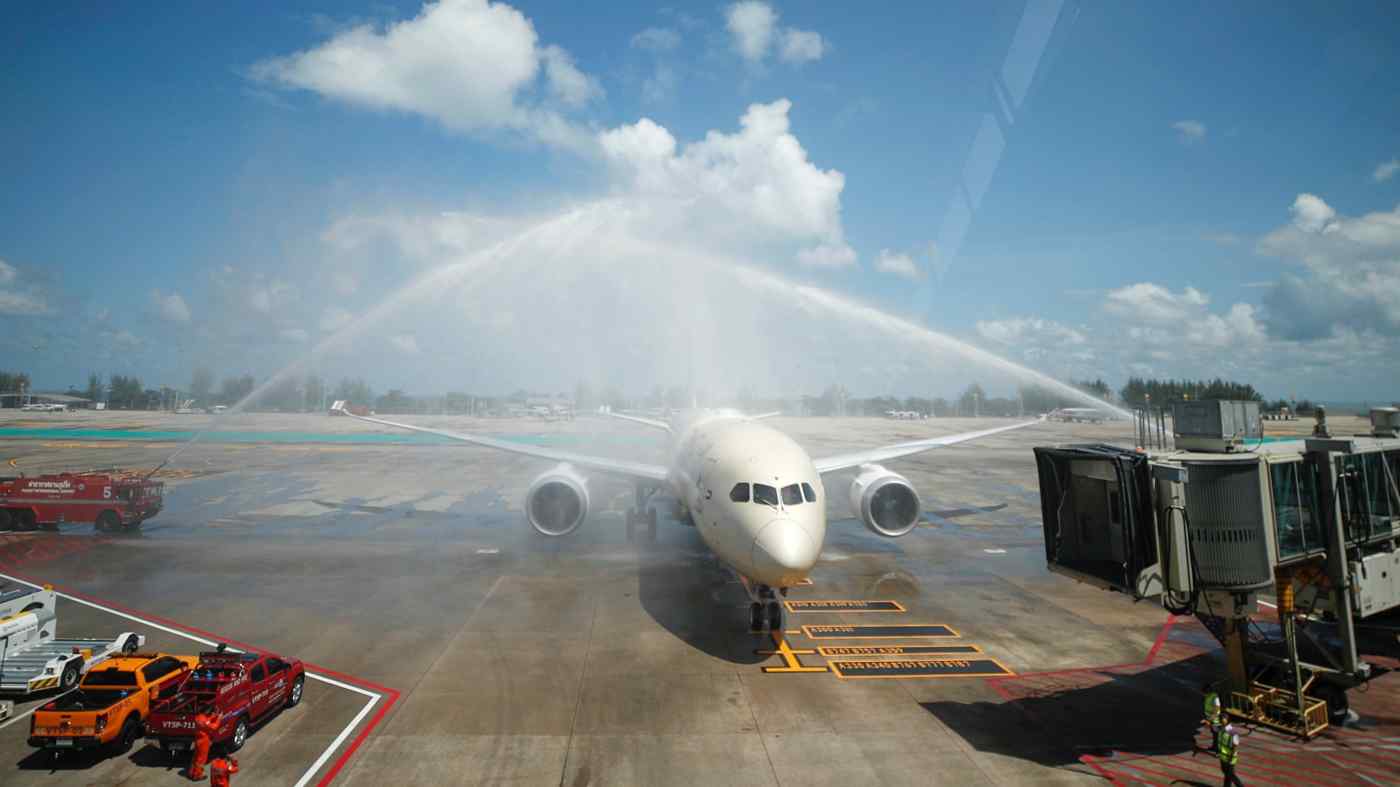 Phuket gives a water cannon salute to the first plane arriving with foreign tourists who do not have to be quarantined as the Thai tourist island on July 1 begins a crucial experiment to rescue its economy.   © Reuters
MASAYUKI YUDA, Nikkei staff writerJuly 1, 2021 14:09 JSTUpdated on July 1, 2021 19:32 JST | Thailand
CopyCopied

After clearing immigration, the visitors were taken straight to their hotels, where they will wait for the results of PCR tests COVID-19. If the results are negative, the tourists are free to roam the entire island.

"I can't wait to walk on the beach," said a father of two children traveling from Abu Dhabi. His family will spend a month on the island off southern Thailand's Andaman coast.

The Etihad flight was followed by a Qatar Airways flight from Doha and an El Al flight from Tel Aviv. A Singapore Airlines flight was scheduled to land later in the afternoon. The four flights were due to bring in a total of 249 passengers, according to the Thai government.

"I want the 'Phuket sandbox' to succeed as a way to achieve our big goals," Prime Minister Prayuth Chan-ocha told reporters. "May all Phuket residents be proud because it is a mission for the nation."

The prime minister's visit reflects the importance of the Phuket sandbox experiment. The Thai government intends to use the island as a steppingstone, with tourists gradually allowed to land in other spots as the country methodically reopens to vaccinated international tourists. Plans are for a full reopening by mid-October.

Koh Samui, a touristy island in the Gulf of Thailand and roughly 250 km northeast of Phuket, is scheduled to reopen on July 15. A beachfront area in Phuket on June 29, 2021. The Thai government was slow to finalize details of the sandbox, so the experiment begins with only a trickle of tourists.   © Reuters

A tourism recovery is key to salvaging the Thai economy, now suffering through a coronavirus-induced crisis. Tourism and related businesses used to account for 20% of the country's gross domestic product. Without international arrivals, Southeast Asia's second largest economy in 2020 shrank 6.1%.

"It is imperative that we recover the economy," the prime minister later said in a speech at a reopening ceremony. "Tourism is the nation's main income."

On June 23, the Bank of Thailand lowered its economic outlook for 2021 to 1% from 3%, while also downwardly adjusting its 2022 forecast to 3.9% from 4.7%, as an ongoing third COVID wave is expected to reduce the number of tourists the country can accommodate.

The tourists who began arriving on Thursday will not have to spend a day in quarantine if they fulfill certain requirements, one of which is that they be fully inoculated for at least 14 days before their departure with a vaccine registered with Thailand's Ministry of Public Health or approved by the World Health Organization.

A vaccine certificate must be presented as proof. A negative PCR test result received no more than 72 hours before departure and insurance for COVID-19 expenses with minimum coverage of $100,000 are also required. Visitors must arrive on a direct flight from a low- to medium-risk country as categorized by Thailand's Ministry of Public Health.

People from Japan -- which was considered a high-risk country by Thailand as of June 15 -- will be able to visit the island without any quarantine period, but only for business.

Tourists entering via the sandbox can continue on to another destination in the kingdom only after spending at least 14 nights in Phuket. They also must undergo three PCR tests at their own expense, first upon arrival, then on Day 6 or 7, and finally on Day 12 or 13. All tests must come back negative.

According to government spokesperson Anucha Burapachaisri, bookings made with six commercial airlines suggest that 11,894 tourists and 426 flights will arrive in July under the Phuket sandbox scheme. The expected tourist and flight totals for Thursday show the program getting off to a slow start.

Local reports attribute the quiet reopening to the government's delay in finalizing the scheme. The sandbox received final cabinet approval on June 22, with details only enacted on Tuesday, when they were spelled out in the Thai government's Royal Gazette public journal.

A measurable number of potential visitors from Europe and the U.S. had to postpone or cancel visits as relevant embassies or consulates for those long-haul travelers failed to issue the required certificates of entry in time due to Thailand's late enactment of the details, according to the reports. Bangla walking street, which used to be a popular nighttime hangout in Patong Beach, is dark on June 30, 2021. (Photo by Masayuki Yuda)

The experiment comes with risks. The Thai government has prepared contingencies to delay or cancel the sandbox if it detects 90 confirmed cases per week, transmissions across three districts and six subdistricts, or an occurrence of untraceable super spreads. A halt would also be triggered if an uncontrollable superspreader situation results in 80% or more of the island's hospital beds being occupied.

Locals have mixed feelings about the reopening. Representatives of domestic and international hotel chains are projecting confidence in their ability to safely serve incoming tourists, while proprietors of and workers at small local shops harbor low expectations. "Chances for the reopening to be successful are only 10 out of 100," said a 45-year-old server named Jeab at a noodle restaurant in Mueang Phuket district. "People are still afraid of the coronavirus."

The island itself might have become less attractive to some travelers as many restaurants and shops have closed their doors for good. Pubs and bars are not allowed to operate under current regulations meant to control the pandemic. Bangla walking street, one of the busiest nightlife districts on popular Patong Beach pre-COVID, was virtually empty on Wednesday, with few places open.