TOKYO -- Economists have downgraded growth forecasts for parts of Asia, including Thailand and Indonesia, as pandemic-related problems continue to plague manufacturing and consumption through the third quarter.

The Japan Center for Economic Research and Nikkei conducted a quarterly survey from Sept. 3 to Sept. 23, collecting responses from 39 economists in India and the five biggest members of the Association of Southeast Asian Nations -- Indonesia, Malaysia, the Philippines, Singapore and Thailand.

Average growth for the five ASEAN countries in 2021 was forecast at 3.5%, down 0.6 points from the previous survey in June. The outlook for India dropped 0.3 points to 9.4%. In addition to COVID-19, respondents see U.S. monetary policy and the economic slowdown in China as key risks.

Thailand's growth prospect was the lowest in the survey at 0.5%, down 1.4 points from the previous survey. "The worse- and longer-than-expected domestic pandemic could exacerbate the recent supply disruption, weak tourism sector and negative income effects," said Somprawin Manprasert, chief economist at the Bank of Ayudhya in Thailand.

Daily infections in Thailand topped 23,000 in mid-August but declined through September. Still, the government is worried. "Despite the government's easing of lockdown measures, the ongoing outbreak is expected to remain devastating and prolonged amid high daily COVID-19 cases and a relatively low percentage of a fully vaccinated population," said Lalita Thienprasiddhi, senior researcher at Kasikorn Research Center. The country's vaccination rate is about 40%, only half that of Singapore.

Indonesia's growth rate was revised down from 4.1% to 3.5%, the second-lowest among the five ASEAN countries in the poll. Despite being relatively successful in containing COVID-19 infections after they peaked in July, "economic recovery is likely to be slower because the government has been applying mobility restrictions," said Dendi Ramdani, head of industry and regional research at Bank Mandiri.

The outlook for the other surveyed ASEAN members was a bit brighter, with the Philippines holding steady at 4.3%. Jonathan Ravelas, chief market strategist of BDO Unibank, cited higher exports and remittances. 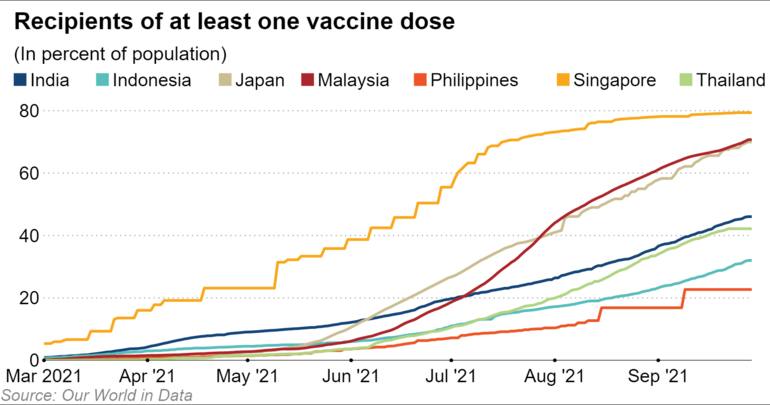 While countries like Singapore, Vietnam and Malaysia benefited from rebounds in manufacturing and exports, the delta variant could trigger "fresh lockdowns and forcing some factories in ASEAN countries such as Malaysia, Thailand and Vietnam to close or cut capacity," said Suhaimi Ilias of Maybank Investment Bank.

"Malaysia is a key node in the global semiconductor supply chain, and the effect of delays could ripple through the entire network, affecting Singapore in indirect ways," said Manu Bhaskaran, CEO of Centennial Asia Advisors. "More broadly, the highly transmissible delta variant plus China's strict containment posture means that shipping-related bottlenecks are here to stay for longer and could affect Singapore's exports in complex ways," according to Bhaskaran.

In India, Punit Srivastava, head of research at Daiwa Capital Markets, said the "global shortage of semiconductors has hit the Indian auto industry." 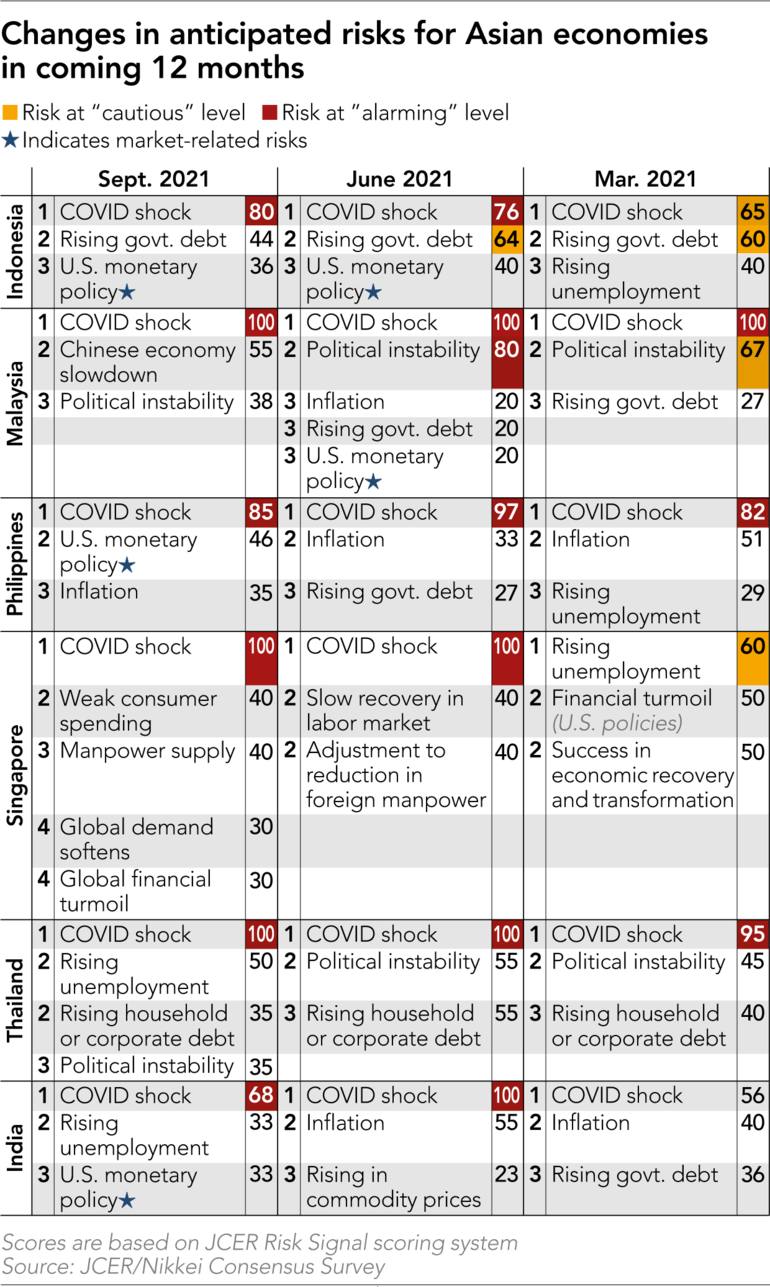 Vincent Loo of KAF Research suggested that Malaysia could be a beneficiary of the supply chain disruption, "as orders for our exports increase due to shortages in other countries."

Apart from the COVID-19 factor, U.S. monetary policy is seen as one of the key risks for Asian economies in the coming 12 months. The U.S. Federal Reserve Bank's move to taper quantitative easing and an expected policy interest hike in 2022 could lead to the depreciation of Asian currencies against the U.S. dollar. "A shift in the [Fed's] stance can hit global risk sentiments, causing capital outflows from emerging markets such as India," said Dharmakirti Joshi of Indian analytics company CRISIL.

The survey also indicated the growing danger of China's economic slowdown, which was ranked as the second-highest risk in Malaysia. "A renewed global economic slowdown, especially in the U.S. and China would dampen exports demand, which has been a main pillar to support the recovery," said Lee Heng Guie of Socio-Economic Research Centre in Malaysia.