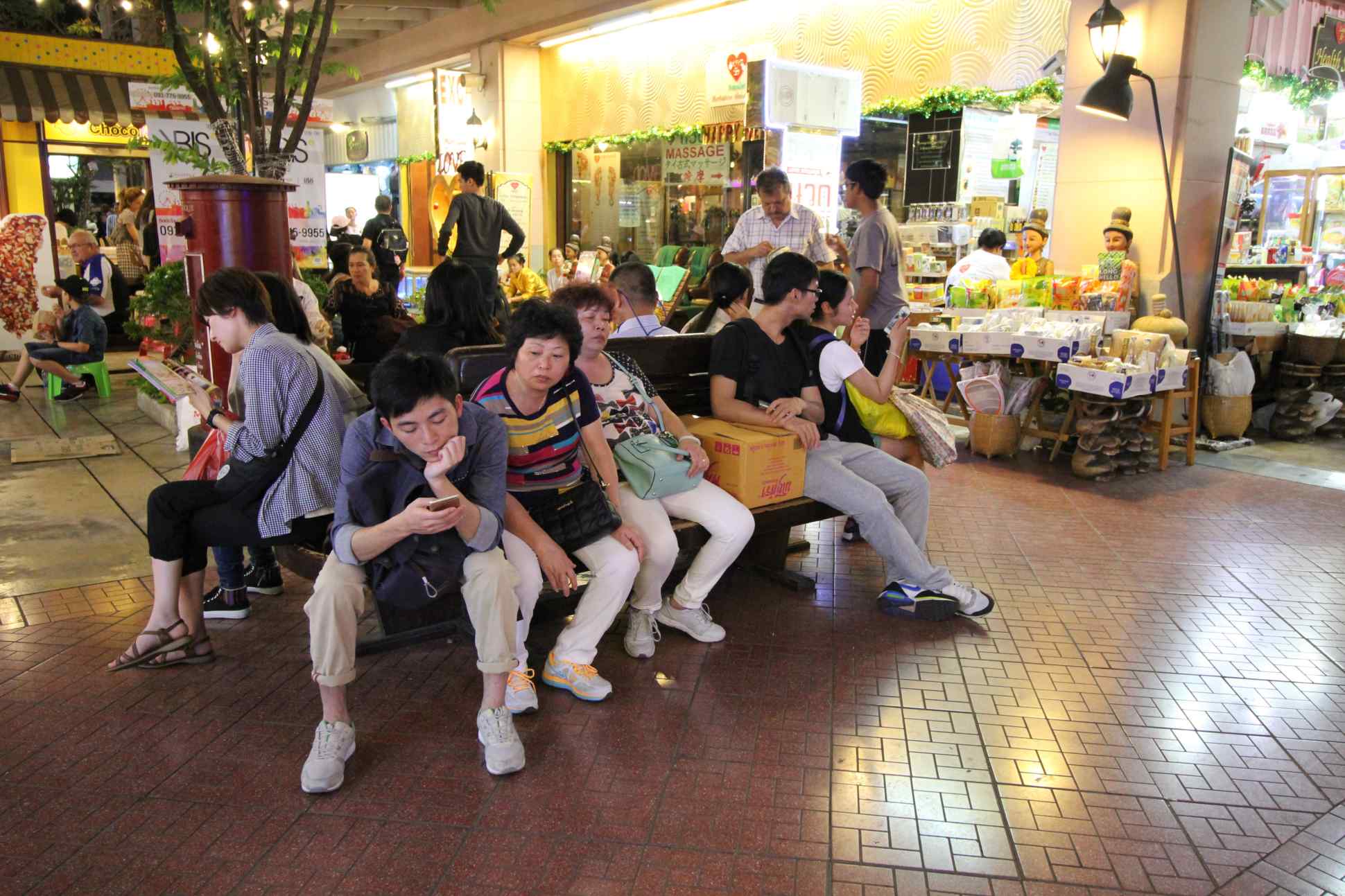 BANGKOK -- Four Chinese tourists in their 20s tuck into an early lunch of "pad Thai," a stir-fried noodle dish cooked with egg and shrimp, at a restaurant on Khaosan Road, a popular backpackers' hub in the Thai capital. Two of the women, sporting wide-brimmed sun hats, search for travel information on their mobile phones. They are planning a trip to Pattaya, a seaside resort south of Bangkok.

"This is our third day in Thailand; so far it is good," one of their male companions, using a Chinese-English translation app on his smartphone to speak to the Nikkei Asian Review, said of their six-day stay. He did not want to be named, but said they were all from Beijing on their first trip to Thailand. The trip was planned through online searches, mobile phone bookings and visits to Ctrip.com,  a popular Chinese online travel service provider.

Thai tourism officials are welcoming such Chinese travelers with an eye on the future. They are increasingly seen as the next wave to boost tourism from China, now the largest source of overseas holidaymakers in this Southeast Asian nation. Unlike the first wave, made up of large groups, these young holidaymakers are classified as "Chinese FITs," which means "free, independent travelers," a classification shaped by the relatively small size of a travelling party and the manner in which they plan their trips, eschewing the large package tours. 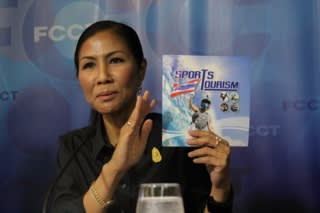 According to Kobkarn Wattanavrangkul, Thailand's tourism and sports minister, Chinese FITs accounted for nearly 60% of holidaymakers from the roughly 8.9 million Chinese tourists who visited Thailand in 2016. It marks a new trend that touches a wide sector of the tourism industry because these travelers stay and spend more money, "across a larger area, including many SMEs [small and medium enterprises]," she said.

It is a wave that will help push total international arrivals to a record 32.5 million in 2016, up by 8.8% from the previous year, according to official data. Thailand's tourism revenue is forecast to hit 1.67 trillion baht ($46.51 billion) for 2016, a 15.2% increase from 2015, ensuring this sector continues to account for 10% of gross domestic product. And it affirms Thai tourism's resilience, as the country weathered a wave of deadly bombings in August in popular tourist resorts, which killed four Thais and injured many foreigners, including tourists.

Fittest of the FITs

Khaosan Road's mix of low-budget guesthouses and boutique hotels, sandwiched between a crush of Chinese shophouses converted into bars, restaurants and colorful souvenir shops, affirms the impact of the Chinese FITs.

"They occupy 20% of the rooms during some months of the year," said Sanga Ruangwattanakul, chief executive officer of the Buddy Group, which owns three small hotels in Khaosan Road. "It is a growing market and very strong."

While the Chinese FITs appear, on the one hand, to follow the well-worn paths of such travelers, initially from Japan and then from South Korea, there is one difference. "They are the ones branching out by using their mobile phones to travel," Sanga said. "Most speak very basic English, so they don't need guides to go about; if not, they use Google translator on their phones."

Thai investors eyeing the expanding FIT market are poised to tap these growing millions. A typical business in this category is Show DC which wants to lure these travelers to its $300 million new multi-themed modern complex on the edge of a busy highway leading to Suvarnabhumi Airport, Bangkok's largest international gateway.

"Large shopping malls have no future, because of this," said Chayaditt Hutanuwatara, chairman of Show DC Corp., pointing to his black smartphone on a table in front of him. "International travelers need a different reason to shop, so we are going to offer a variety under one roof." 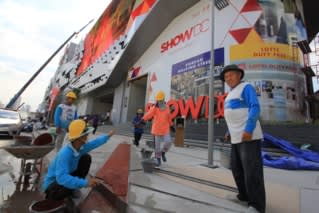 Construction workers put the finishing touches on Show DC, a new multi-development complex for tourists to open in Bangkok in April 2017. (Photo by Marwaan Macan-Markar)

Chayaditt's plans for the six-floor sprawling complex, spread over 180,000 sq. meters, include fleets of 130 tourist buses shuttling travelers from Bangkok's two airports and from hotels across the city to Show DC, which plans to open its doors in April 2017.

Besides entertainment venues, which will occupy 50% of the floor space and a broad menu of dining and shopping options, the complex will house the "Bangkok City Lounge,"  which aims to be like a central tourism service center. "I am building this not for tour groups but for the independent traveler from China, India, elsewhere," Chayaditt said. "The paradigm of tourist business has to be changed."

Thai officials have pursued similar bold measures, with a growing crackdown on "zero-dollar Chinese tourists." Launched in September with the help of Chinese authorities, the campaign targeted Chinese tour companies offering cheap tour packages to largely first-time travelers that, according to reports, resulted in more pain than pleasure for both the tourists and Thai businesses catering to them. The Thai initiative, shutting down three "zero-dollar tour companies" and impounding 2,150 tour buses, marked an about-turn after an earlier push to boost tourist numbers on the back of such cheap Chinese tours.

According to a Thai tour agent, who did not want to be named, the Chinese tourists groups are "trapped" once they come to Thailand. They are forced to stay, travel and shop in places that are part of this tightly-controlled network, she said.

"If they step out of line or go to a shop not designated, the tourists are scolded, sometime hit and even not given their hotel room keys," she added. "Thailand also loses financially, since the money flows to these Chinese operators and not to Thais."

On the downside, the crackdown on this vibrant market raised alarms back home, as travelers from China slipped dramatically from October, when the country marked its "Golden Week" holiday. As 2016 drew to a close, the Tourism Authority of Thailand revealed that the number of Chinese tourists had fallen by 16% in October, 30% in November and 10% in December compared with the same months in 2015. Consequently, Thailand has scaled down the number of tourist arrivals from China, from 10 million to 8.9 million for 2016.

Yet, Yuthasak Supasorn, TAT's governor, is determined to stay the course. "The government will continue the crackdown on zero-dollar tours and illegal business in a bid to shift to more quality (in the tourism sector)," he told media in mid-December. Kobkarn, the tourism minister, argues likewise that measures are needed to achieve "sustainable growth" in the Chinese sector.

But analysts are warning against this over-dependency on a single market, as tourism receipts from China are expected to reach 400 billion baht in 2016. A slowdown in Chinese tourist numbers cannot be ruled out, warned the Siam Commercial Bank's Economic Intelligence Centre. It urged state and private operators to tap new source markets and to expand tourism services, flagging major sport events and health care as fertile terrain.