BANGKOK -- Thailand's central bank cut its benchmark interest rate on Wednesday as it tries to boost sluggish growth and keep a lid on the currency.

The Bank of Thailand Monetary Policy Committee voted 5-2 to lower the one-day repurchase rate by 0.25 of a percentage point to 1.25%. Two committee members voted to hold the rate steady. The latest cut brings the rate to its historical low, which the bank maintained from April 2009 to July 2010 to stave off the global financial crisis.

Of 28 economists in a Reuters poll, 13 had predicted the cut while 15 had expected the bank to stand pat. During its meeting in August, the policy committee surprised market watchers with a quarter-point cut. Their views were split this time.

The latest easing signals that the Bank of Thailand is working in tandem with the government to support the waning economy. Thailand's gross domestic product grew at its slowest pace since 2014 in the three months ended in June.

GDP figures for the quarter ending September are expected on Nov 18. 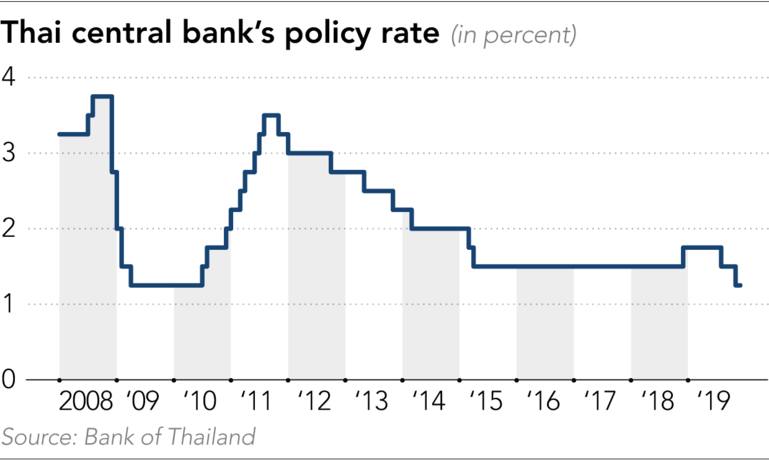 The kingdom's economic planning agency, the Office of the National Economic and Social Development Council, has lowered its forecast for 2019, predicting GDP will grow between 2.7% and 3.2% this year, down from its previous forecast for 3.3% to 3.8% growth. In August, the government introduced an economic stimulus package of 316 billion baht ($10 billion).

The rate cut on Wednesday is also seen as a measure to stem the baht's rise. The Thai currency touched 30.15 against the dollar on Oct. 25, its highest point since May 2013. Easing by Western central banks, including the U.S. Federal Reserve and the European Central Bank has encouraged buying of baht-denominated assets, pushing up the value of the currency. Putting downward pressure on the yield of these assets may help stem capital inflows.

The baht has risen 6.7% against the dollar since the end of 2018, creating headaches for Southeast Asia's second-largest economy, which relies heavily on exports and tourism. "The central bank's international reserve data suggests that the bank has been acting directly in the market [so that the baht does not] appreciate too rapidly," a currency analyst said.

As of Oct. 25, the Bank of Thailand had international reserves worth $222.5 billion, up 8.5% since the end of 2018. But the monetary authorities must move cautiously: More obvious intervention could put Thailand on a U.S. watchlist of currency manipulators, something it avoided in June. Countries on the list are subject to U.S. trade penalties.

Low inflation allowed the bank to trim the one-day repurchase rate. The kingdom's consumer price index rose 0.11% in October from a year earlier, putting inflation at its lowest since June 2017 when the CPI contracted by 0.05%. Thailand's inflation rate has stayed below the central bank's 1% to 4% target range for five consecutive months.

Reacting to the rate cut, the baht fell to 33.39 against the dollar, its weakest level in about three weeks.

New measures that the central bank announced on Wednesday to stimulate capital outflows also contributed to the baht's fall. The measures, introduced in cooperation with the Ministry of Finance, will allow exporters to keep foreign currency proceeds overseas; they will also allow businesses and individuals to more freely transfer funds abroad.

The central bank expects the measures will induce capital outflows and take pressure off the baht. Despite the relaxed rules not taking effect until Friday, some speculative selling may have pushed the baht lower after the announcement.

"We will evaluate from time to time and consider more relaxed measures appropriately," said Bank of Thailand Gov. Veerathai Santiprabhob.