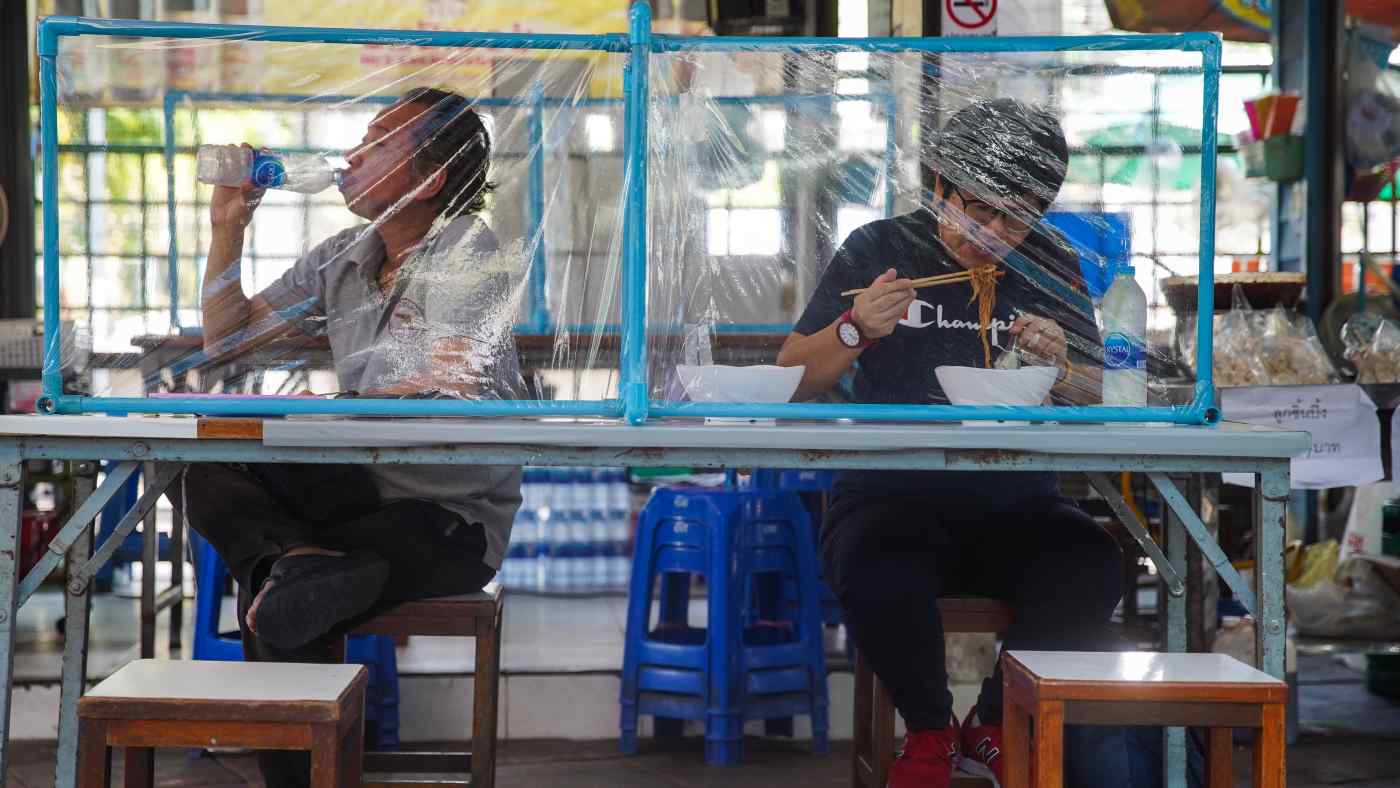 BANGKOK -- The streets of Bangkok hardly returned to business as usual Sunday, the first day of relaxed COVID-19 restrictions imposed in late March for such establishments as restaurants and hair salons.

"We decided to resume our dine-in service from today, because commuters would probably eat here," said Woranuch Rukchaiyaphum, shopkeeper at Thai noodle bowl stall Krua Kamrai Thong. Her shop is near the Victory Monument elevated-train station in central Bangkok. Many buses operate from nearby as well. It is an important commuting junction for Thais.

In front of her stall are five serving tables, each with an unusual divider handmade from pipes and plastic film. "We invested 1,500 baht ($46) on these barriers," the 43-year-old shopkeeper said.

Thailand allowed some businesses to reopen Sunday, including restaurants and hair salons, that were shut down under a state of emergency issued on March 26. The country plans to fully reopen its economy in four phases, with additional easing, such as the opening of department stores and fitness clubs, expected later. The opening of nightclubs is likely to come last.

The safety guidelines ask restaurants, food stalls and other eateries to keep customers 1 to 1.5 meters apart or place barriers between them. 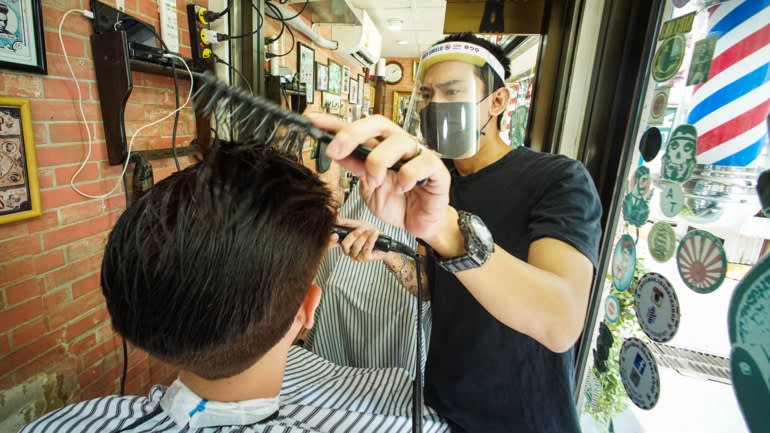 A hairstylist protects himself with a face shield and a mask while giving a haircut in Bangkok on May 3. (Photo by Akira Kodaka)

Around 12:30 p.m., a government official visited Krua Kamrai Thong to make sure that proper protections were in place. It got the thumbs-up. "The barriers allow us to sit four people per table," Woranuch said. "Without them, we can only serve two per table, making it hard for us to make money."

For a stall that sells a bowl of noodles for 40 baht, the investment was not cheap. A source at another food stall reports that some eateries still hesitate to invest, unsure whether customer traffic will cover the investment. Thailand is still under a state of emergency and a curfew from 10 p.m. to 4 a.m., both imposed by Prime Minister Prayuth Chan-ocha's government. Materials for barriers are also in short supply, posing an obstacle for restaurants.

This also holds true for a street called Thaniya in central Bangkok. It is crowded with Japanese restaurants, karaoke bars and nightclubs. Many restaurants there still provide only takeout service.

Easing the restrictions did not revive tourist hot spots, with the government deciding to extend a ban on inbound international flights to May 31. The effort to avoid bringing in the coronavirus from abroad has virtually choked off the inflow of tourists.

The Chatuchak Weekend Market in northern Bangkok consists of hundreds of small clothing shops, souvenir shops and art boutiques. It is seen as a favorite of tourists. Although the government allowed open-air markets to operate with proper screening and social distancing measures, the market remained closed. Backpackers' paradise Khaosan Road had more construction workers for renovation than tourists or shopkeepers. Only a handful of restaurants or shops were open.

Then there are places enjoying a surge in demand thanks to the easing. David's Barber Shop on Thaniya Street had a line of seven people at 11 a.m. Barbershops and hair salons were allowed to reopen Sunday. They can provide only haircuts, shampooing and drying. Dyeing and perming are not allowed. They must also clean their shops and disinfect equipment and furniture at least every two hours.

David's was one of the few barbers in the neighborhood that decided to operate under the demanding guidelines. Stylists cut hair while wearing masks and face shields. "Last time I got a haircut was in late February," a British customer on line said. "My hair is too long for Thai weather," he said. April and May are the hottest months in the kingdom. 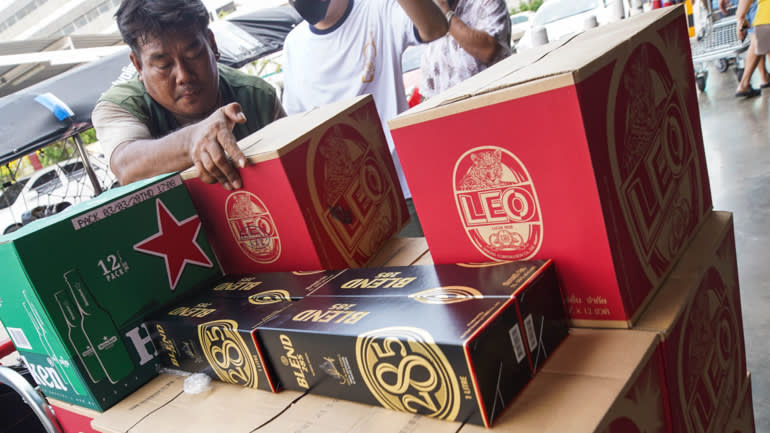 A customer loads beer cases in front of a shopping mall in Bangkok after the ban on alcoholic-beverage sales was lifted May 3. (Photo by Akira Kodaka)

Thailand also lifted a ban on sales of alcoholic beverages Sunday, luring crowds to local supermarkets. At a store of large cash-and-carry chain Makro, shoppers came out with a cart full of beer boxes. One customer purchased 20 boxes of LEO, a Thai lager, each containing 12 620-milliliter bottles.

The Thai government described the easing measures Sunday as the first of a four-phase reopening. It did not specify which businesses will be included in subsequent phases. Shopping malls, concert venues and sports stadiums are among the businesses still under restrictions.

Thailand was originally seen in the region as the most vulnerable to COVID-19, as it used to be a favorite Southeast Asian destination for visitors from the initial epicenter of Wuhan, China. The government has since implemented many preventive measures, mainly to avoid importing the novel coronavirus from abroad and to contain local transmission by limiting gatherings. Some were undemocratic but effective.

Local reports said the Thai habit of wearing hygienic masks in polluted air has helped limit local transmission. The cultural practice of greeting with the prayerlike wai gesture instead of shaking hands, hugging or kissing has also contributed. Thailand was also very quick to adopt telecommuting.

But like many other countries, it has not found an easy solution for containing the virus locally. Social distancing and quarantines are still the main effective measures. The government said it will monitor the coronavirus situation for at least two weeks to move to the next phase.