Thailand falling behind in global battle with plastic waste Individually wrapped bananas draw criticism from environmental groups as being one of the many wasteful practices of retailers that contribute to Thailand's problem with pollution. (Photo by George Styllis)
GEORGE STYLLIS, Contributing writerJune 5, 2018 12:56 JST | Thailand
CopyCopied

BANGKOK -- "Beating plastic pollution" has been set as the theme for World Environment Day on June 5, but Thailand is falling behind Asian and European countries in the fight against plastic waste.

The issue has been brought into focus after a dead whale was found last month to have swallowed 80 plastic bags.

The whale, found in Songkhla province, served as a reminder of Thailand's problem with plastic, and the abject failures of the government and retail industry to bring the nation's environmental consciousness in line with the rest of the world.

Thailand is the world's sixth biggest contributor of ocean waste, while China is the largest. Thailand generates 1.03 million tons of plastic waste per year, with over 3% of that finding its way into the ocean, Tara Buakamsri, Thailand country director for Greenpeace, told the Nikkei Asian Review.

Of the country's total waste, plastic accounts for 12%, higher than China's at 11%. A survey by the government in 2017 found that on average Thais each use eight plastic bags per day, which equates to around 198 billion per year.

"Most people, especially the middle class people, know how to segregate waste, how to reuse and how to recycle, but because of how many products they use in their daily life, they just throw a lot away," Tara said.

At a large food and beverage expo in Bangkok last week, plastic packaging was ubiquitous. Several food producers interviewed said they were willing to use environmentally friendly products, but the low cost and convenience of plastic made them reluctant to change. 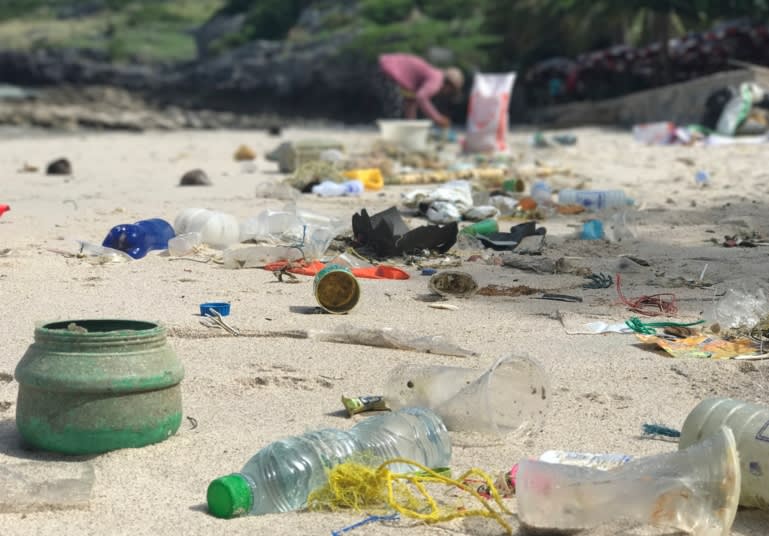 "It comes down to what you see as more important. In Thailand we tend to consider price first, whereas in Europe and Japan companies prioritize the environment," said a representative of a prominent family business who wished to remain anonymous.

He said the onus was on consumers to start recycling. But activists said there needs to be greater awareness first.

Thailand has some 400 recycling facilities around the country and it rewards rubbish collectors for sorting out recyclables. But in doing so, personal responsibility is taken away from consumers, who leave the problem to others to, literally, sort out.

Yai Yanee, owner of snack company Siam Delicious, said she is paid by a company that comes to her factory and sorts out her trash. She amasses about 200kg of waste every week, for which the company pays her 3,000 baht ($94).

"I don't have time to sort the rubbish myself," she said.

CP All Group, owner of the 7-Eleven franchise in Thailand, responded in a statement that it vigorously upholds policies in line with international environmental standards, and implements a "say no to plastic bags" campaign.

"It has been on the national agenda to raise awareness of the importance of using our resources efficiently and reduce the number of plastic bags, and lessen the impact we make on the environment," according to the statement.

Still, with the country's mini marts and convenience stores poised for aggressive growth around the country this year -- CP All Group is set to operate 11,000 stores by the end of the year -- changing people's attitude to plastic will be vital.

Malaysian tourist Louisa Lausin, who was at the food expo, said Asian consumers see shrink-wrapped fruit and vegetables as a mark of freshness. She said that before her government imposed a ban on plastic bags in certain Malaysian cities, she had not bothered with recyling.

Other Asian governments have been similarly spurred into action. China recently reported a 66% drop in plastic bag use since a crackdown on free distribution began about 10 years ago. China has also banned imports of plastic waste.

Malaysia, Indonesia and India have all pledged to ramp up efforts to cut plastic bag use, either through bans, taxes or committing more money to clean up polluted waters.

The European Commission, which has the potential to pressure Thailand into raising its environmental standards, announced it was proposing new EU-wide rules to target single-use plastics. In the past, Thailand has capitulated to EC rules over its fishing industry, so the European body could force change on the government.

Since 2015, Thai Prime Minister Prayuth Chan-ocha has appealed to Thais to cut down on plastic bag use and to lead a more eco-friendly lifestyle. Waste management is also part of his 20-year national strategy.

To some extent, those efforts have gained traction as recycling has increased, said Greenpeace's Tara. Some cafes and shops in Bangkok also now offer refilling services for shampoo, detergent and other products.

But critics said that the government is just paying lip service, pointing to a China Daily report that claimed Thailand imported plastic waste from the U.K. this year for the first time. This is a seemingly regressive step given Thailand's recycling infrastructure is barely capable of processing its own plastic, let alone any other country's.

Following the death of the whale after experts tried for five days to save it, Jatuporn Buruspat, head of the Marine and Coastal Resources Department, was quoted by Reuters as saying his ministry planned to raise public awareness of the plastic problem on World Oceans Day on June 8.