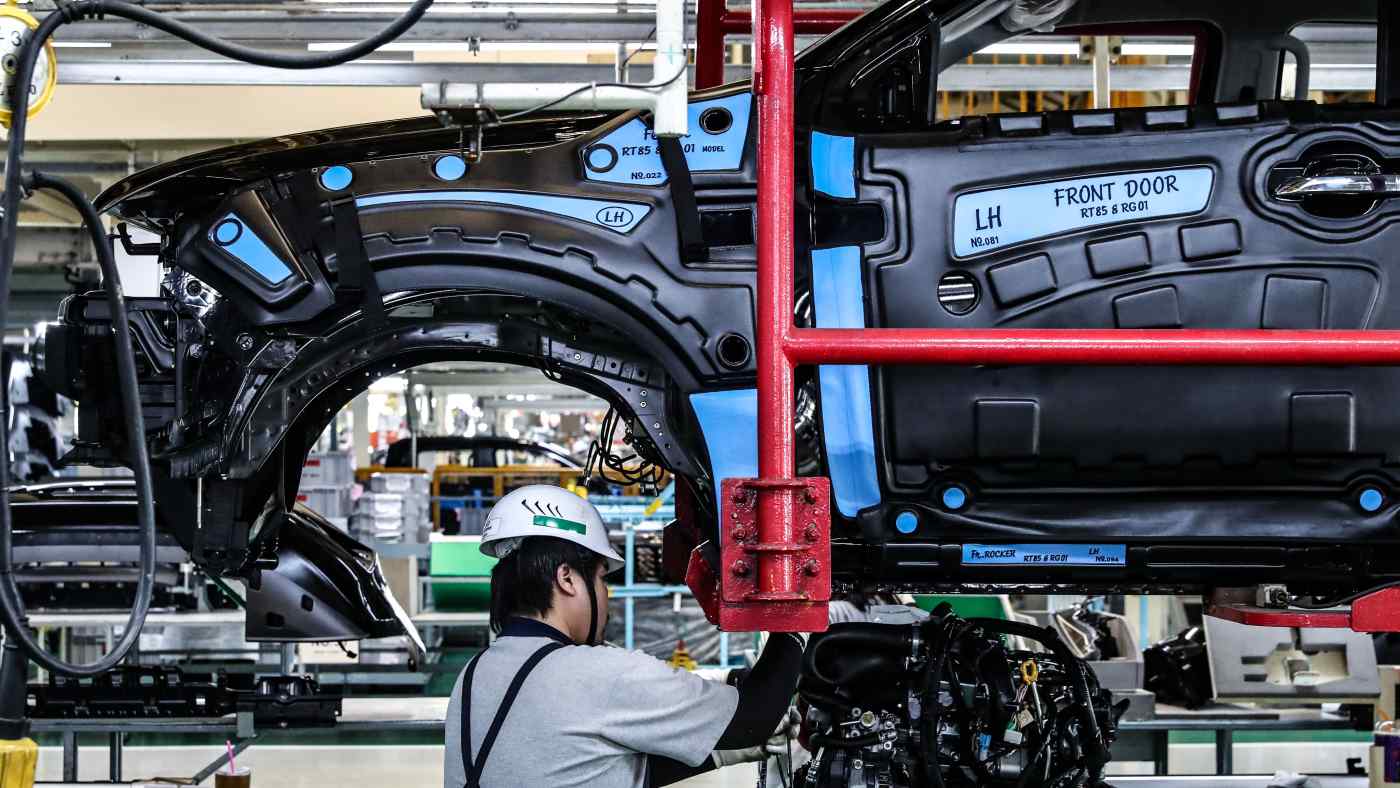 BANGKOK -- Vietnam and Thailand stand out as success stories in containing the coronavirus, drawing praise from the World Health Organization. But as 2021 begins, a disparity between the two Southeast Asian economies is widening.

The contrast between a rising Vietnam and a plateauing Thailand emerged a few years ago but has deepened during the pandemic. It is illustrated in a recent decision by Panasonic to end production of washing machines and refrigerators in Thailand to consolidate appliance assembly in Vietnam.

Thailand was an important country for Panasonic. The company opened its first postwar overseas production site there in 1961. When then King Bhumibol Adulyadej visited Japan in 1963, Panasonic founder Konosuke Matsushita gave him a tour of its television plant.

Panasonic still has auto component and battery plants in Thailand, but the production shift shook the government, especially because the destination was Vietnam, which Bangkok regards as a key competitor in attracting foreign investment.

Panasonic has used Thai plants to make large-capacity models while Vietnamese factories built medium-capacity appliances. Both nations have served as bases for export to a dozen other countries in Asia, the Middle East and elsewhere. The shift of production location was decided early last year but was unrelated to the COVID-19 pandemic, a company spokesperson said.

But why shift to Vietnam from Thailand? One factor is market size. U.K. researcher Euromonitor International says 2.8 million refrigerators and 2.27 million washing machines were sold in Vietnam during 2019, compared with 1.92 million and 1.75 million, respectively, in Thailand.

Furthermore, 92% of Thai households own fridges and 70% have washing machines, compared with 74% and 40%, respectively, in Vietnam, leaving the latter country more room for sales growth.

Vietnam also holds a production advantage. Though the country's labor costs have risen prominently in recent years, they remain around 60% that of Thailand.

"There used to popular appliances unique to each country, so our approach was to use local production," said Akio Ota, former president of Panasonic Appliances Vietnam. "But as urbanization has advanced everywhere in Asia, regional product preferences have grown similar. The Thai market has little room for growth, but labor costs are high, so it was natural to consolidate production." Thailand began developing into "Asia's factory" during the 1980s, while manufacturers started building Vietnamese production bases only in 2007, when the country joined the World Trade Organization. But Vietnam overtook Thailand in terms of foreign direct investment in 2014 and for export value in 2018.

Vietnam has been regarded as a viable post-China option since U.S.-China trade frictions began to escalate and the new coronavirus began to spread. An increasing number of international companies think the country has more growth potential than Thailand.

But is this true? An analysis of the countries' economic structures reveals a slightly different picture.

The first area to note is export of goods. About 40% of Vietnam's exports go to the U.S. and the European Union, while about 30% of Thailand's are for destinations within Southeast Asia.

In 2019, Thailand posted a combined $13.9 billion trade surplus with Cambodia, Laos, Myanmar and Vietnam, the less developed countries in the Mekong region collectively called CLMV. Thailand's trade balance elsewhere was in deficit, considering that its overall surplus was $9 billion.

Notably, Thailand's trade surplus with Vietnam was $6.7 billion, nearly half the CLMV figure. Products, especially consumer items, made in Thailand command strong popularity, which has helped Bangkok capitalize on the growth potential of its neighbors, especially Vietnam.

A similar picture emerges in Thailand's exports of services. The country's surplus was $23.3 billion in 2019, before the pandemic, nearly triple the $8.7 billion posted by Vietnam. Unlike goods trade, services figures with individual nations are unavailable, but Thailand's overall services trade is thought driven by neighboring countries.

After the first wave of COVID-19 infections in March and April ran its course, Siam Piwat senior executive vice-president Mayuree Chaipromprasith called for prioritizing the resumption of entry by tourists from CLMV into Thailand. Her company operates Siam Paragon and Iconsiam in central Bangkok, two of the largest commercial complexes in Southeast Asia.

Her reasoning was based only partly on infections having subsided in these countries by then. In normal times, these tourists represented about 30% of foreign visitors to the company's facilities. This key customer segment spent an average of 100,000 baht ($3,300) per visit -- a telltale indication of high purchasing power from wealthy and middle-income segments of the neighboring countries.

The third relates to investment. Though Vietnam leads in foreign direct investment, Thailand increasingly makes its presence felt as an external investor. Its external investment exceeded FDI into Thailand for the fourth straight year in 2019.

Investment from Thailand has gone mainly to Vietnam. Thai Beverage Public, known for its Chang (Elephant) brand of beer, retailer Central Group and materials giant Siam Cement Group are among the Thai companies that have made large investments overseas as they bolstered their financial muscle through tie-ups with foreign companies.

The future development of CLMV -- especially Vietnam, which Thailand regards as a rival -- is increasing in importance for Thailand's growth as the driver of its exports as well as investment.

"In the Thai economy, there's a developing phenomenon that can be called 'Mekongization,' in which the country's relationship with Mekong region countries is growing closer," said Ryuichi Ushiyama, principal economist at the Japan Center for Economic Research.

The origin of this trend dates to 1988, when then Thai Prime Minister Chatichai Choonhavan began an initiative to transform the Indochina Peninsula from a battleground into a market -- and it is finally bearing fruit.

The population of the Mekong region, including Thailand, totals 240 million. This rivals the 267 million people in Indonesia, the world's fourth most populous country.

The Thai economy's key to future growth is to capture demand from the countries in its region, which are connected by land. The country does not necessarily need to compete with Vietnam for the position of "Asia's factory." A supermarket in Vietnam that has received investment money from Thailand's Central Group. Thailand Inc. has been investing in its neighbors and winning fans in the Mekong region. (Photo courtesy of Central Group)

The roughly 5,500 Japanese companies operating in Thailand were overtaken in 2019 by Chinese rivals in terms of the amount of internal investment they applied for. But the cumulative investments they have in Thailand give them a big advantage in accessing demand in the Mekong region.

For these Japanese corporations, strategy is now more important than scale in investing. They need to make a realistic assessment of the current state of the Thai economy and decide how to use their existing capacity and relationships with local companies.