BANGKOK -- Thailand's plan to impose a 500 baht ($15) tax on each incoming international visitor -- possibly from 2022 -- has the tourism industry concerned about possibly reducing the number of tourists as the country prepares to further reopen its borders amid the COVID-19 pandemic.

"The fee to be implemented is considerably high for those visiting Thailand, where hotel rooms can be had for as little as 1,000 baht," Thai Hotels Association president Marisa Sukosol Nunbhakdi said in a recent interview with Nikkei Asia. "The 500 baht will affect potential visitors' decisions."

The proposed tax was raised from 300 baht that was originally approved by the National Tourism Policy Committee earlier this year. The Center for Economic Situation Administration, the government's policymaking body for economic issues, approved the 200 baht increase earlier this month, but it will still need cabinet approval to be put into force.

The new tax is separate from a departure tax that has already been levied for decades on outgoing travelers, designated a passenger service charge. According to the Civil Aviation Authority of Thailand, the departure tax varies from 400 baht to 700 baht depending on which airport passengers depart from. Travelers must pay 700 baht to leave Bangkok's Suvarnabhumi Airport, the country's main international gateway.

In 2019, 39.9 million tourists spent 1.91 trillion baht in Thailand. They stayed in the country an average of 9.3 days, according to the Ministry of Tourism and Sports, and spent about 5,172 baht a day. The tax could crimp money flowing into the tourism sector.

The proposed tax will be used to help transform Thailand from a low-budget destination to a more upscale market for international travelers. "The additional cost won't have an impact on tourists, as we want to focus on the quality market," Tourism Authority of Thailand Gov. Yuthasak Supasorn told local media earlier this month. "We hope this fund will support a national tourism makeover to create more safe and clean places."

The tax could be implemented as early as next year, when the Tourism Authority expects to receive 5 billion baht from 10 million foreign visitors in 2022 -- an ambitious visitor forecast compared with other institutions, such as the Bank of Thailand. The central bank expects only six million foreign travelers next year. 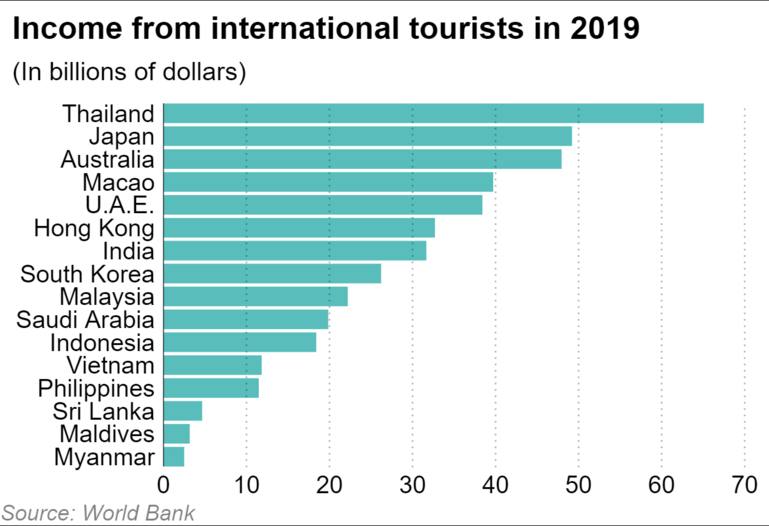 Reviving tourism is an urgent task for Thailand's economic recovery. The sector and related businesses used to account for 20% of the country's gross domestic product prior to COVID. From July, the Southeast Asia country started accepting vaccinated tourists on the southern island of Phuket without any quarantine.

The government intends to start welcoming vaccinated tourists at its main tourist destinations on the mainland such as Bangkok, Pattaya, Huahin and Chiangmai from November.

While some disagree with the government's move to hit foreigners with the new charge, they agree that the tourism industry needs a war chest. Kongsak Khoopongsakorn, President of the Thailand Hotels Association southern chapter, said the fund should be used in developing tourism-related projects, protecting the environment, and promoting regional tourism.

"We need the fund for several purposes to make our tourism industry grow sustainably," Kongsak said. "But I don't think the fund should be obtained from tourists." Kongsak feels it should be bankrolled by the government and allocated to every region, "because each region would have different needs so that the fund could be adapted to match [their] needs."

Chairat Trirattanajaraspon, former chairman of the Tourism Council of Thailand, insisted that a fund would be useful during a crisis. "I think this is a good time to implement the [tax], as the COVID-19 pandemic has already pointed out a clear need," Chirat said. "The proposed fund would be a very useful mechanism to lend support to the tourism industry if we face another crisis in the future."

Thailand's tourism infrastructure could use an upgrade. The latest evidence came from a careless government that left personal details of 106 million visitors exposed on the internet.

The massive data breach contained each visitor's full name, sex, passport number, residency status and visa type, along with their Thai arrival card number and date of arrival. It was discovered by a cybersecurity research firm on Aug. 22. Thai authorities removed the data the next day.

Some tourist attractions in Thailand have been criticized as having a dual pricing system that charges foreigners more than Thais without corresponding services that justify the added cost.

Once the new tax is implemented, international tourists may want to see an improvement in the sector that could possibly justify the added fee.