Pattaya, Chiangmai to postpone September reopening due to insufficient vaccines A couple pass a closed bar in Pattaya, Chonburi Province, on April 3. The reopening of the popular beach town will be delayed due to a low vaccination rate.   © Reuters
MASAYUKI YUDA, Nikkei staff writerAugust 25, 2021 15:16 JST | Thailand
CopyCopied

BANGKOK -- A slow recovery in tourism is expected to leave many Thais jobless, and Pattaya and Chiangmai look to postpone reopening to international visitors by a month to October due to insufficient vaccines.

Thailand's unemployment rate during the second quarter was 1.89%, the Office of National Economic and Social Development Council announced on Wednesday. That was a slight recovery from 1.96% in the first quarter but remained elevated compared to pre-COVID times, when the rate was below 1%.

The recovery was a surprise to labor market watchers. Danucha Pichayanan, secretary-general of the economic planning agency, said in May that the rate was "expected to rise again." Tanit Sorat, vice chairman of the Employers' Confederation of Thai Trade and Industry, predicted that the jobless rate might reach 2.5% in the second quarter.

Thailand is struggling from ongoing outbreaks of the delta strain, which spread in early July. Affected provinces have been put under business lockdowns and a nighttime curfew since mid-July, pushing more companies, especially small- and medium-size enterprises, to consider slashing workforces and job offers. The second-quarter data did not include the impact of the delta epidemic.

Traditionally, going back to rural areas was a safety valve when people lost jobs in Bangkok and other cities. People were able to easily enter the agricultural sector and other forms of self-employment. But the elevated unemployment rate suggests that the number leaving urban areas has been too large to handle. 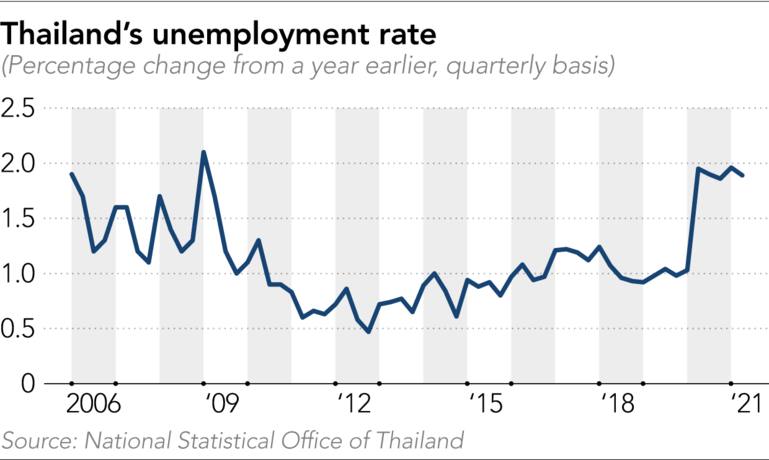 Tourism and related businesses, which used to account for 20% of the nation's gross domestic product in pre-COVID times, had been the hardest-hit sector since the dawn of the pandemic because of travel restrictions.

In June, Prime Minister Prayuth Chan-ocha launched a plan to fully reopen the country in 120 days for inoculated travelers, in hopes of lifting the economy and employment through reviving tourism. But the delta outbreaks and slow vaccine rollout have clouded the country's road map to reopening.

Two major tourist destinations look to postpone their reopening. Chiangmai, the largest city in northern Thailand, is expected to delay it by a month to Oct. 1. The city aims to fully inoculate 70% of its population to minimize the risk of outbreaks caused by tourists as new variants emerge globally. But the vaccination rate had not been reached as of Aug. 19, according to Tourism Authority of Thailand Deputy Gov. Thanet Phetsuwan.

The reopening of Pattaya, a beach town on the Gulf of Thailand, will be delayed for the same reason. Bun-anan Phatthanasin, president of the Pattaya Business and Tourism Association, admitted to local media that a plan to achieve herd immunity before September appeared unlikely to be accomplished. He said he had no idea when the plan would be completed.

The road map began in July, with Phuket launching a "sandbox experiment." The country took a calculated risk to welcome vaccinated visitors without any quarantine period in a closed environment where the government could halt the test if epidemics evolved on the island.

The island of Koh Samui followed Phuket in mid-July. The island of Krabi was to accept tourists from the beginning of August, but that was delayed, and the reopening started in a different fashion from what the government originally anticipated. From Aug. 17, Krabi began welcoming tourists who had already spent over seven days in Phuket.

The September reopening of Chiangmai and Pattaya, along with other tourist destinations such as Buriram, was going to be an important opportunity for Thailand to assess the pros and cons of inviting tourists to the mainland for the first time in the pandemic. The delay clouds the country's path ahead, as it will have less data to use in weighing a full reopening. Chiangmai, the largest city in northern Thailand, is expected to delay its reopening to tourists from Sept. 1 to Oct. 1.   © AP

The government, however, has indicated optimism. "Based on the figures currently available, it has been agreed that the outbreak situation has reached its peak and will slow down," said Opas Karnkawinpong, director-general of the Department of Disease Control.

The outbreak situation slightly eased this week. In the past few weeks, daily cases had been at roughly 20,000, but daily confirmed cases on Monday and Tuesday were both under 18,000, and 18,417 cases were reported on Wednesday.

Opas said the assessment on reopening will be made after the lockdown measures are lifted. The current restrictions are scheduled to expire by the end of this month.

The government also has expressed confidence on securing vaccines. As of Aug. 19, 8.2% of Thais were fully vaccinated against the coronavirus, while 19.9% were partially vaccinated, according to Our World in Data. Raising those proportions is vital to the safe and full reopening of the country.

AstraZeneca, which has been locally producing its vaccine since June, was contracted to deliver 61 million doses before next May, but Prayuth's government has been pushing the pharmaceutical company to advance delivery to the end of this year. On Monday, AstraZeneca confirmed that it will step up vaccine deliveries and aim to deliver the remaining doses by the year's end, according to a government spokesperson.

The country also received 150,000 AstraZeneca doses from Bhutan in order to contain the outbreaks of the delta strain. The government said that they were borrowed, not donated, from Bhutan and that it intends to return an equal number of doses or more in the future.