Thailand to benefit from China-Japan thaw BANGKOK -- Thailand has emerged as one of the first candidates for planned business cooperation between China and Japan in third countries.

In a business conference in Bangkok on Thursday, government representatives of China, Japan and Thailand announced their intention to pursue business collaboration in the Eastern Economic Corridor, a special economic zone along Thailand's eastern seaboard which is being heavily promoted by the military junta.

The move came after Chinese Premier Li Keqiang and Japanese Prime Minister Shinzo Abe signed an agreement earlier in May to set up a private-public body to promote joint operations of the two countries' enterprises in third countries. The agreement was in line with Abe's promise to extend cooperation on China's Belt and Road Initiative, a project launched by President Xi Jinping to develop land and maritime trade routes connecting Asia with Europe.

On Thursday, Ning Jizhe, vice chairman of China's National Development and Reform Commission, told the conference in Bangkok that collaboration with Japan in the EEC would serve as "an important demonstrative [of] cooperation" under the agreement. It is the first time that a particular investment location had been publicly discussed among government representatives.

The EEC is a pet initiative of Thailand's current military junta. The economic zone, which spans three provinces along the eastern seaboard, aims to attract high-technology investment so that Thailand can advance from being an economy centered on labor-intensive industries. The government is speeding up infrastructure development, with projects to expand seaports, airports and rail links in the pipeline. Ning said that China and Thailand are working to connect the EEC with the Belt and Road. 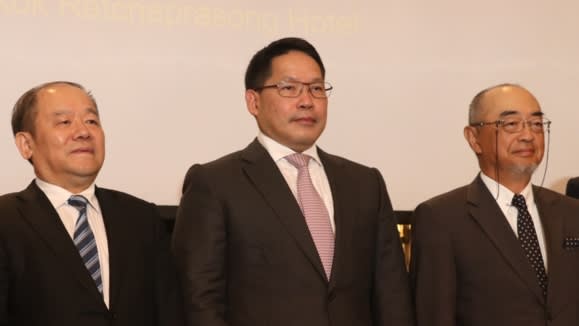 From left to right, Ning Jizhe, vice chairman of China's National Development and Reform Commission, Thailand's Industrial Minister Uttama Savanaya and Shiro Sadoshima, Japan's ambassador to Thailand pose for photos during a forum in Bangkok on May 31. (Photo by Hiroshi Kotani)

Shiro Sadoshima, the Japanese ambassador to Thailand, told Thursday's forum that the EEC will be a "typical candidate venue" for Sino-Japanese cooperation. He said that the Thai government's plans to foster next-generation industries and to speed up key infrastructure projects in the EEC would provide opportunities for collaboration.

More than 1,000 Japanese companies already have investments in the eastern seaboard, which is one of the largest industrial zones in Southeast Asia. Meanwhile, China's investment in the area stands at just over 100 companies. However, more investment is expected to flow in as the country expands its reach into the Indochina region, in line with the Belt and Road Initiative. Internet giant Alibaba Group recently announced plans to build a logistics hub in the EEC with an investment of 11 billion baht ($340 million).

Thailand's Industrial Minister Uttama Savanaya added that human resource development was another area in which Japan and China could jointly help. A lack of skilled labor is becoming a serious issue in Thailand as it strives to upgrade its industrial sectors. "Numerous opportunities for international cooperation are emerging in Thailand," he said. "Japan and China can advance the framework of cooperation here."