BANGKOK -- The notion of banking beyond borders was once a fantasy for Bank of Ayudhya, Thailand's fifth largest bank by assets. It was an enterprise better left to bigger rivals.

But times have changed since Bank of Ayudhya, which is branded as Krungsri, became a subsidiary of Japan's Bank of Tokyo-Mitsubishi UFJ (BTMU) in late 2013, and Thai operations were integrated in 2015. The 536-billion-yen ($5 billion) takeover has made Krungsri's world smaller and produced some headline-making deals the midsize bank would not have previously contemplated. In September, Krungsri entered Cambodia with the acquisition of Hattha Kaksekar, the country's fourth largest microfinance institution. The move complements other entries into neighboring markets. In April, Krungsri opened its first representative office in Yangon, Myanmar, on the same day BTMU opened its first branch there. BTMU was among nine foreign banks granted banking licenses in the nascent economy in 2015.

BTMU is the core banking unit of Mitsubishi UFJ Financial Group, Japan's largest financial group with operations worldwide. With backing of this kind, Krungsri has stepped up corporate finance and been able to position itself for cross-border mergers and acquisitions. Noriaki Goto is the merger specialist from BTMU at the helm of Ayudhya.

In 2015, it served as banker to Central Group when the Thai retail giant went on an acquisition spree in Germany involving three department stores. Krungsri helped facilitate a $1.1-billion investment announced in December when Thailand's Boonrawd Brewery -- best known for Singha beer -- took a stake in Vietnam's Masan Group, a food and beverage conglomerate. A recent investment in India by a Thai auto parts maker was also handled by Krungsri.

Krungsri's second year of integration has seen considerable expansion, inspiring greater confidence in the market. The share price has risen 24% since the beginning of the year, easily outperforming the benchmark SET index and most peers in the banking sector. Chief Executive Noriaki Goto, who is on secondment from BTMU, wants to build on Krungsri's existing portfolio by providing access to BTMU's global network and financial resources.

"Slowly, it's becoming part of the DNA of Krungsri to think about how we can utilize the expertise and network of BTMU as our own assets," Goto told the Nikkei Asian Review. "The synergy between the two banks has started getting real."

While other banks have struggled with high nonperforming loans (NPLs) and provisioning requirements, Krungsri's NPL ratio has dipped to 2.2%, its lowest since the 1997 financial crisis. Its coverage ratio, a metric that shows a lender's ability to absorb potential losses from NPLs, is 146.4%, the second highest after Bangkok Bank

Soon after he arrived at Krungsri, Goto hired extra debt collectors in the knowledge that hard economic times lay ahead. That was early 2014 when Thailand faced political deadlock ahead of a coup in May. The hirings added to costs but paid off. "We collect our debts before other banks come to collect theirs," said Goto. The integration of 4,000 Japanese corporate clients from BTMU's old Bangkok branch did much to enhance Krungsri's asset quality. "Many of BTMU's clients are subsidiaries of big Japanese companies, so they don't have much risk -- no NPLs," a banking analyst at Maybank KimEng Securities told NAR.

In the first six months of 2016, net profits surged 20% year on year, while some of Thailand's four bigger banks and midsize peers saw theirs sink. The one-time boost from the integration of the BTMU Bangkok branch was completed last year, so Krungsri is now running on its own merits.

Its ambition is to close in on the big four banks in Thailand and become a "first tier" bank. 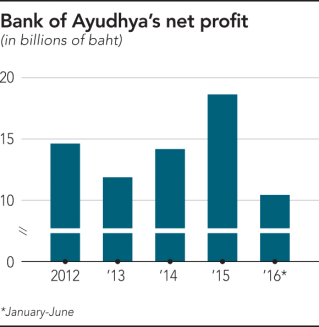 In terms of overseas resources, none of Thailand's four larger banks can hope to match BTMU's network. In China, where Thai banks with their strong ethnic Chinese origins have solid footholds, BTMU operates 11 branches and five sub-branches. Bangkok Bank has seven branches and sub-branches, and Kasikornbank just two.

While BTMU is strong on Japanese corporates with large regional investments, Krungsri's traditional expertise is in retail and consumer banking. It already has the largest number of consumer finance accounts in Thailand, and is the largest national automobile finance provider. This results from the restructuring strategy of GE Capital, Krungsri's main shareholder for seven years before selling out to BTMU.

Like other Thai financial institutions, Krungsri was hit hard in 1997, and very nearly had to enter the government's assistance program. The Ratanarak family, which owned the bank, turned to GE for help. GE focused on consumer finance as a specialty. During those seven years, Krungsri's expansion included acquisitions of retail banking and microfinance businesses from foreign financial institutions such as AIG and HSBC.

Following the BTMU integration, Krungsri has built up the corporate business infused from the Japanese partner but without neglecting retail and consumer business, Goto said. "The integration has been smoother than any other merger I have been involved in," said Goto. His 31 years at BTMU have involved him in major mergers and restructurings. He originally joined Tokyo Bank expecting a  career  in international banking, and was assigned to the merger of Tokyo Bank and Mitsubishi Bank in 1996, a milestone in corporate history that established him as a merger specialist. Goto was involved in forming MUFG as a holding company in 2001, combining the main bank and two trust banks, and the merger of the Bank of Mitsubishi Tokyo with UFJ Bank to form BTMU. Prior to Bangkok, he was in New York overseeing the absorption of Union Bank as a BTMU subsidiary.

"Things were much more complicated in New York," said Goto. Union Bank was not a complete merger like BTMU-Krungsri. The merger basics are always the same, however: "Get to know your new partners, try to understand them, and do what is best."

With that in mind, Goto decided as soon as he arrived to visit personally as many Krungsri branches as possible. There are around 650 at present, and he has already called at roughly 340. These visits helped develop a branch reform plan dubbed the Nexus project. The idea is to restructure branch operations focused mainly on retail to provide financial services for small to medium enterprises (SMEs). At present, the operations are run independently -- even when they are under the same branch roof.

"I cannot tell the details as the other banks may copy us," said Goto, laughing. "Our rivals are focusing on us."

Other banks are stepping up their relationships with Japanese banks too. Bangkok Bank has signed an agreement with Sumitomo Mitsui Banking to handle deposits for SMBC clients at its branches in Thailand. Siam Commercial Bank, the third largest Thai bank, has been in a strategic alliance with Mizuho Bank since 2014.

BTMU's Bangkok branch started as a Tokyo Bank branch, and dates back 60 years. Even though all signage and decor has been changed to Krungsri's distinctive yellow corporate livery, locals still often refer to it as Tokyo Bank. Not everyone was happy with the changes, and a number of Japanese-speaking cashiers left. "They obviously wanted to work at a foreign bank, not at a Thai bank which is not even among the big four," a Krungsri employee said.

Such issues are minor, according to Goto, and so far the benefits seem to outweigh any losses. "It will take 10 years to be able to properly evaluate if the merger was a success or not," he said. "We are building a strong foundation that will lead to a positive evaluation when the time comes."

Thai major banks are smaller than their regional rivals but are now racing to forge partnerships with foreign entities. Krungsri's efforts to grow beyond its old borders under BMTU will be watched closely during this era of economic integration in Southeast Asia.