The 1980s auto trade wars are back

WASHINGTON After U.S. President Donald Trump signed an executive order on Jan. 23 pulling the U.S. out of the Trans-Pacific Partnership trade agreement, he quickly turned to Japan and criticized the nation's trade practices regarding automobiles, calling them unfair. The stinging rebuke recalls the two decades of auto trade wars that peaked in the 1980s.

"We sell a car into Japan, and they do things to us that make it impossible to sell cars in Japan, and yet they sell cars into us," Trump told a group of corporate chiefs on Jan. 23. He argued that Japan has nontariff barriers to its domestic market, such as strict environmental standards.

"Negotiations [with the U.S.] on vehicles are going to be especially tough," a senior Japanese government official said immediately after Trump's remark.

Trump is seeking to shrink the U.S. trade deficit, including the roughly $70 billion annual deficit in its trade balance with Japan -- about 70% of which is accounted for by products in the automobile category. The issue may come up when Trump meets Japanese Prime Minister Shinzo Abe in a summit that could take place in early February, and Abe is arranging to meet with Toyota President Akio Toyoda to discuss how Japan should respond to Trump's trade demands. "Mr. Trump's policy toward Japan echoes the intensified trade frictions of the 1980s," said another Japanese official, who works on trade policy.

Amid an oil crisis and a rise in the dollar, U.S. vehicle imports jumped nearly 20% from 1978 to 1979. The three big American automakers laid off workers, and Chrysler came to the brink of bankruptcy, sparking talk of a Japanese threat looming over the U.S. manufacturing sector.

In 1981, President Ronald Reagan's administration put together a plan to rebuild the U.S. auto industry. Responding to the tough line from Washington, Tokyo implemented a voluntary export limit of 1.68 million vehicles annually through fiscal 1984. Those restrictions were renewed until 1994.

MOVING PRODUCTION Meanwhile, Japanese automakers got busy setting up production sites in the U.S. Honda Motor kicked things off in 1982 with an Ohio plant, and Toyota Motor and Nissan Motor soon followed suit. Still, frictions between the trading partners remained. Washington complained that Japanese auto plants in the U.S. ordered too few components from American suppliers.

Trump's run for the White House was not the first time that Japanese industry has been caught up in U.S. election-year politics. When President George H.W. Bush campaigned for re-election in 1992, he brought along the heads of General Motors, Ford Motor and Chrysler to Japan. Bush raised the American procurement problem during a meeting with the Japanese prime minister, Kiichi Miyazawa. The joint statement after the meeting laid out purchasing goals that Japanese car companies should strive to meet.

Today, about 6.6 million Japanese-brand vehicles are sold in North America, but only about 1.6 million units are shipped from Japan. Of its vehicles sold in the U.S., Toyota produces about 70% in North America, and the respective ratios for Nissan and Honda are around 80% and 90%. Japanese manufacturers employ roughly 400,000 people in the U.S., exceeding peers from Germany and Britain. 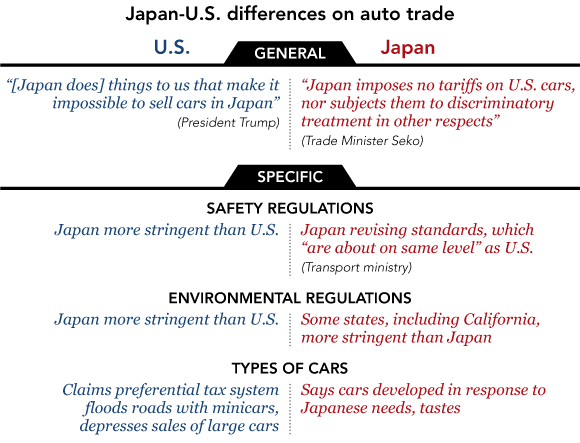 The U.S. says import approvals and distribution arrangements as well as the thicket of safety, noise and environmental regulations in Japan are nontariff barriers that limit access to the nation's market. But European rivals enjoy strong demand for their vehicles, despite competing on the same terms as the Americans. Insiders in Japan generally claim that the American automakers have not made enough effort on designs, fuel efficiency and sales networks to succeed in this market.

The concern is that Trump will ignore those arguments and put pressure on Japan, using cars as a bargaining chip. If Japanese automakers invest more in the U.S., Trump will take credit. Toyota has already decided to boost production capacity in Indiana.