YANGON Myanmar has enjoyed a surge of goodwill and unprecedented international assistance since Aung San Suu Kyi's National League for Democracy swept to power in late 2015. Investment interest has grown alongside aid flows, amid the dismantling of sanctions imposed by the U.S. and other Western countries over decades of military rule.

But widespread condemnation of the harsh military crackdown on minority Rohingya Muslims in Rakhine State, western Myanmar, has raised concerns among some investors about possible official censure of Naypyitaw by Western governments and United Nations bodies. Any move, for example, to reduce or attach conditions to multilateral lending or bilateral assistance to Myanmar aimed at forcing the military to cease "clearance operations" in northern Rakhine would send a negative signal to investors, they fear. It could also make life difficult for foreign companies that are involved with Myanmar's vast web of military-linked businesses or are operating in Rakhine State. And for some, it could see echoes of the shareholder activism that deterred investors under the pre-2011 military regime. 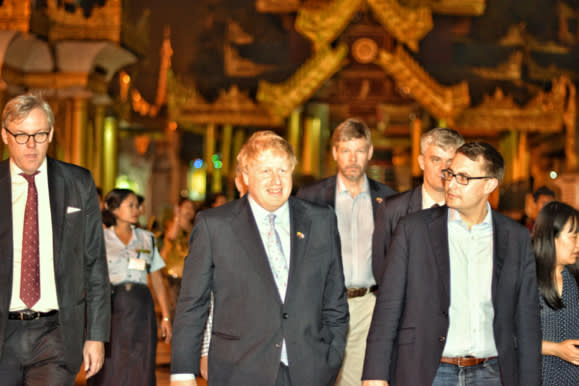 Although Rakhine is one of the country's poorest regions, its largely untapped natural resources, which include offshore oil and gas deposits, have lured foreign energy companies. Among those targeted by shareholders and human rights activists is U.S. energy giant Chevron. In mid-December the group was presented with a shareholder resolution demanding it halt operations in Myanmar until the country ends "state-sanctioned violence against its Rohingya minority." Chevron said in mid-January it would respond within a month through its "normal proxy process."

"Negative publicity is one thing, but any concrete move that hampers business transactions could make life hard for American -- and indeed, most Western -- investors," said a Yangon-based European executive.

For business, any talk of censure is a reminder of the fragility of Myanmar's investment environment. It is unlikely that new U.S. President Donald Trump, who has tried to impose curbs on Muslim immigrants, will criticize Myanmar's human rights record, particularly over abuses of its minority Muslim population.

"Actually, such events -- as disturbing as they are -- will not upset business until reputational risk reaches a certain level, which varies depending on where in the world they are from," said Luc de Waegh, partner at West Indochina, a Yangon-based business advisory firm.

"I don't think threats of resuming sanctions will work this time, as the consensus now is that they were counterproductive. Empathetic engagement is probably the best option," he added.

The U.S. lifted nearly all remaining sanctions against Myanmar in late 2016, including its "blacklist" of individuals and entities barred from commercial transactions with U.S. parties.

LIMITED IMPACT Overall, it is bureaucratic delays rather than negative media headlines and protests by human rights groups that have affected foreign direct investment in Myanmar. 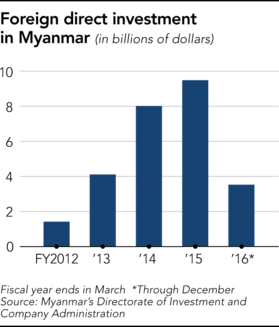 A downturn of nearly one-third in FDI over the first 10 months of Suu Kyi's government was mainly due to extended delays in investment approvals in 2016, as the new government reviewed existing applications and restructured its investment commission. After record FDI approvals of $9.4 billion in the financial year to March 31, 2016, investment slid to $3.5 billion in the nine months to Dec. 31, down by more than $1 billion from the same period in fiscal 2014.

The pace is now picking up, thanks partly to a flurry of delayed project approvals. The neophyte government is also starting to settle in, although both foreign and domestic executives complain loudly about lack of capacity and transparency.

Despite the new government's teething problems, U.S. companies are expanding investment in Myanmar, albeit from what Feldman called "a virtually nonexistent base." Apart from a handful of high-profile investments by multinationals such as Coca-Cola and Colgate-Palmolive, most major U.S. companies are taking a conservative stance, he noted, adding: "I expect the U.S. business presence to continue to grow over the next few years, but slowly and incrementally."

This reasonably upbeat view has been echoed in various quarters, including by U.K. Foreign Secretary Boris Johnson. Signaling continued British support for Suu Kyi's government on his first official visit to Myanmar on Jan. 19, he commended the state counselor for creating a special committee headed by former U.N. Secretary-General Kofi Annan to examine Rakhine's problems, but did not publicly criticize the government's handling of the crisis. Earlier in January, the World Bank approved a $100 million credit to help develop Myanmar's financial sector, while the Asian Development Bank on Feb. 1 signed an agreement to assist Myanmar in developing transportation infrastructure.

As Feldman suggested, the private sector has also maintained its initial surge of interest in Myanmar, although incentives to invest under the NLD government have been tempered by practical rather than political considerations, including the slow development of adequate legal and financial infrastructure.

One of Suu Kyi's biggest supporters has been George Soros, the billionaire investor and philanthropist. In recent months he has privately voiced concerns about her government's inaction on the Rohingya crisis, although through his Open Society Foundation he has provided millions of dollars in assistance to the country. On a mid-January visit to Myanmar, he discussed with Suu Kyi plans to assist the government with fiscal management and other initiatives.

EAST-WEST DIVIDE When it comes to human rights issues, attitudes among foreign investors are increasingly mixed. As one Yangon-based South Asian executive noted: "Western businesspeople are also far more sensitized to the impact of human rights issues -- mainly due to their experience of sanctions regimes and bad publicity."

Investors from Asia are displaying a more relaxed attitude. "The Rohingya issue is a local problem and does not affect foreign investment in Myanmar," said Akio Mimura, chairman of the Japan Chamber of Commerce and Industry, Japan's biggest business group. He visited Myanmar in late January to discuss development of the investment environment, accompanied by about 70 executives from companies such as Honda Motor, Japan Airlines, Sumitomo Corp. "Our interest in Myanmar has not waned at all," Mimura said during his visit.