The mystery of Myanmar's gyrating kyat

Whenever Myanmar's progress with reforms appears to falter or is challenged by events on the ground, the mantra adopted by the government -- and supported by more than a few analysts -- is there will be no backsliding, that the country has gone too far to turn back the clock. 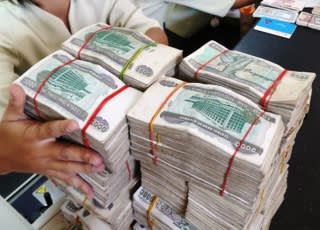 The kyat fell sharply against the dollar in early June, losing 10% of its value in less than a month.

For the country's growing business community, there is also the comforting narrative that even if political reforms regress, Myanmar will still steam ahead on the economic front.

Events of the past few weeks could see these notions turned on their head.

Quite unexpectedly, after months of political stalling by the government, Myanmar's parliament in the week of June 22 started to debate changes to the constitution. One change would loosen but not remove the military's power to block future amendments. Separate proposals to be debated from June 30 would devolve some powers from the central government to the country's 14 states and regions.

These sudden developments might say more about the presidential ambitions of the self-declared reformist Parliamentary Speaker Shwe Mann and a pickup in maneuvering ahead of general elections expected in November. The first set of proposed amendments was rejected June 25 by the military bloc, which holds 25% of the 664 seats in the bicameral legislature. Yet the legislation demonstrates there is still life in the political process and much to play for ahead of the polls.

On the economic front, however, it has been a trying time, both for the kyat and reformists -- whether they are aligned with Shwe Mann or President Thein Sein.

What had been a steady decline in the value of the currency against the dollar turned into a full-blown rout in the first week of June. There were no obvious explanations. By June 10, the kyat had tumbled to 1,280 to the dollar on the informal but officially tolerated foreign exchange market, while the Central Bank of Myanmar was keeping its reference rate at the 1,105 level, set at daily auctions with commercial banks. The kyat had lost 10% of its value in less than a month and about 25% since the start of the year.

Moves by the central bank to support the currency and stop the economy's creeping dollarization only undermined confidence. One directive, issued May 29, instructed government ministries and departments at the central as well as the state and regional levels to make all payments in kyats. Dollar withdrawals from accounts at private banks were limited to $10,000 a week and to no more than $5,000 per withdrawal, although some exceptions were made.

A sense of panic began to sweep Yangon in the first week of June as rumors, later confirmed, spread that the central bank had dramatically squeezed the supply of dollars to commercial banks, which could not meet demand from thirsty importers.

The next blow came a few days after the kyat hit its low of 1,280 on June 10. Licensed money changers and banks received severe official warnings that they must stick to the rules and not deviate from trading within 0.8% of the central bank's rate of 1,105 kyats to the dollar. Suddenly the electronic boards of money changers and banks around Yangon showed only the buy rate for the dollar. No greenbacks were being sold, at least not openly. As a result, the dormant black market leaped back into action, despite a spate of arrests by police in Yangon.

Ripples continued to spread. Depositors started lining up to withdraw their dollars from banks after mid-June. Some employers, including one prominent foreign language school, told their foreign employees that June salaries would be paid in kyats, not dollars, and at the official exchange rate. Importers struggled to source dollars. Exporters were equally frustrated at being pegged to an artificially strong kyat.

Confusion in the streets was matched by turmoil in the corridors of power in Yangon and the capital, Naypyitaw. Kyaw Kyaw Maung, the central bank governor, has been rarely seen in recent weeks amid reports that his health is seriously declining. Central bank insiders have said the governor, in his mid-70s, was spending hours praying at a shrine inside the bank as the currency crisis widened. All the while, his in-tray stack was growing as precariously as money changers' kyat piles.

What has become clear is that the central bank has effectively abandoned the managed floating rate regime introduced, with the support of the International Monetary Fund, in April 2012. The governor was in effect turning the clock back.

Known as a conservative in the socialist mold of the former military regime, Kyaw Kyaw Maung had previously served as governor of the central bank from 1997 until his retirement in 2007, playing a role in the private sector banking crisis of 2003. Some at the bank believe retired Senior General Than Shwe, the former junta leader who many believe still pulls the strings of power, obliged President Thein Sein to reappoint Kyaw Kyaw Maung as governor in August 2013.

With the economy clogging up, the president's office in mid-June called a series of emergency meetings in Naypyitaw. Senior officials and bankers, including the governor, attended. Members of parliament and heads of business associations were present at some sessions.

No official account has been given of the discussions, and  the central bank governor has yet to speak in public about the crisis. But senior government officials say the president's office has effectively wrested foreign exchange policy from the central bank. This calls into question the bank's autonomy as enshrined in law in July 2013, just before the governor was appointed. He cannot easily be removed.

Since pulling what amounts to a coup against the central bankers, the government has adopted several measures. The outcome remains unclear, but reformists are worried by signs of a return to the dark days of the socialist command economy.

Importers have been prioritized under a scheme to allow them to obtain dollars at the official rate, which on June 19 loosened marginally to 1,110 kyats to the dollar. First in line are importers of fuel oil and palm oil. Naturally, other sectors are complaining. Meanwhile, exporters of rice and other agricultural products are howling, as reflected in an editorial comment in the state-run Global New Light of Myanmar that defended farmers.

The problem is that the central bank lacks sufficient foreign currency reserves -- it can cover less than three months of imports -- and is reported to be tapping state banks for their dollars.

At the same time, word has gone out to licensed money changers that "almost normal" business can be resumed. Boards still display the official rate of 1,110 kyats to the dollar. But on June 25 a nod and a wink could get your dollar around 1,170 kyats. If you were trying to buy dollars, and if you could find any, you could haggle a rate of 1,185.

This sort of officially driven arbitrage is clearly not sustainable, however, and commercial bankers are now waiting to see if the central bank and the president's office return to the managed float system and let the kyat gradually depreciate. Some analysts reckon that 1,500 to the dollar could be reached by the end of the year. In the meantime, some exporters, rice traders, for example, are linking up with importers to make their own currency arrangements.

Meanwhile, an IMF delegation has arrived and will stay until July 1. Its mission is part of the annual Article IV consultations, but representatives will want to know whether Myanmar is backsliding in its promised commitment to reforms. Should the central bank successfully argue that it is justified in its actions to defend the kyat, then one option would be an IMF stand-by loan with conditions attached.

For many ordinary folk, the kyat-dollar rate represents a barometer of national economic progress. The falling kyat, which for many means more expensive medicines and higher prices for imported goods, is seen as testimony to government policy failures. But an artificially defended kyat can only last so long. And the elections are still more than four months away.

Guy Dinmore is news editor of The Myanmar Times in Yangon.