HONG KONG -- These days in China, when banks are in no mood to dole out cash, the country's old-economy enterprises start falling like a house of cards.

The latest string of corporate failures, concentrated in the northeastern rust belt where the local governments are also awash in debt, not only exposes the vulnerabilities of China's lending market, but also casts a shadow on what had appeared to be a recovery among the country's banks.

Many analysts are now pointing out that earnings at banks have been stabilizing not so much due to improving debt fundamentals but rather because of cost cuts, asset disposal and asset growth off the balance sheets. Chinese banks felt the squeeze of plunging profitability at their lending businesses last year, indicated by their 7.8% decline in net interest income, and also saw their credit costs climb due to mounting nonperforming loans. To protect their bottom lines, banks increasingly took to cutting their loan-loss coverage ratios -- funds set aside for future losses as a percentage of their nonperforming debt.

The loan-loss coverage ratios at Chinese banks shrank by an average of 6 percentage points last year, according to credit rating agency Moody's.

ICBC, for instance, pushed down its bad-debt buffer to 136.69%, below the 150% required by the authorities. By doing so, the bank was able to eke out 0.5% growth in net profit. "Net profits would be under more pressure if the banks were not running down their reserves to meet some of their loan losses," said Yulia Wan, an analyst at Moody's. 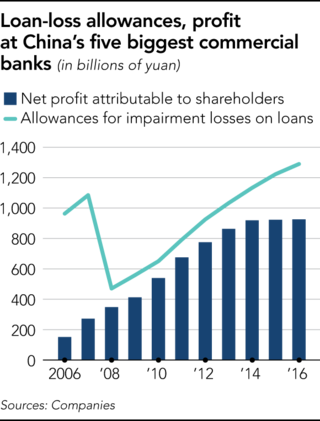 Meanwhile, banks have been taking more drastic measures to detoxify their loan books. The value of write-offs and transfers by the big five rose 18.4% to 302.38 billion yuan in 2016, over 14 times higher than five years earlier. While bigger lenders also took to securitization and debt-equity swaps, smaller banks resorted to restructuring their loans.

Through such steps, banks reported much slower growth in bad loans compared with the previous two years. The combined balance of nonperforming loans and special-mention loans -- those overdue but yet to be considered impaired -- at the big five expanded 11.9% on the year to 2.56 trillion yuan, far slower than the 33.9% growth logged for 2015 and 31.6% growth for 2014. Their average nonperforming loan ratio ticked up just 0.02 point to 1.7% last year, while that for special-mention loans rose by just 0.04 point to 3.47%.

Because of their weaker capital strength and deposit franchises, smaller Chinese banks tend to grow their profits through less-regulated lending practices, often referred to as "shadow banking." That was reflected by the substantial increases they logged in investment assets and fee income. 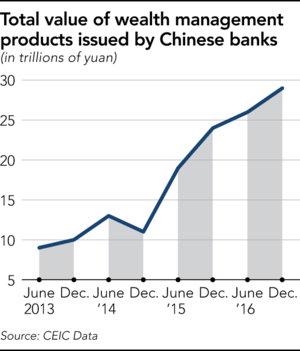 According to PricewaterhouseCoopers, joint-stock commercial banks saw their investments grow 30.9% on the year in 2016, representing 32.5% of their total assets. The figure is even bigger for city commercial banks, jumping to 48.9%, or 46.19% of their assets and significantly larger than their loan portfolios.

Many of their investments were in wealth-management products managed by nonbank financial institutions. More worryingly, those investments are increasingly supported by wholesale funding, such as the issuance of interbank negotiable certificates of deposit -- a short-duration, highly liquid, low-risk-weighted financial instrument that enables interest rate arbitrage -- whose issuing rates have remained elevated since September 2016 due to stepped-up efforts by regulators to rein in shadow banking.

"Tightening regulation is having an impact on banks with weak fundamentals," Victor Wang, equity analyst at Jefferies Group, wrote in a note on May 2. In addition to being required to fund their balance sheets mostly via stable deposits, Chinese banks have been told to tighten their loan classifications and better disclose risks both on and off their balance sheets. Wang said he expects weaker banks to see much slower asset growth and higher credit costs. "[I]n order to dress up the bottom line, these banks may have to cut costs aggressively," Wang said. "In the long run, their ability to generate capital, to serve clients, maintain internal morale and retain talent will all be challenged. Cutting the dividend payout ratio and/or raising additional equity will be inevitable for weak banks." Citing such concerns, he slashed his earnings forecast for Bank of Communications by 10% for 2017.

China's financial sector appears to be undergoing a serious overhaul ahead of the Chinese Communist Party's National Congress, to be held in the fall. "Reining in financial risks should be given more attention," President Xi Jinping told the party's Politburo Standing Committee -- the country's top policymaking body -- on April 25. "Systemic risks ought to be strictly guarded against."

Shakeups this year include the replacement of the heads of the country's banking, security and insurance regulators. And Beijing has been ramping up its disciplinary action in the financial sector. The China Banking Regulatory Commission said on April 7 that in the first quarter of 2017 alone, it had handled 485 cases of administrative penalties, exacted total fines of 190 million yuan and penalized 197 people in the banking sector.

ICBC was fined 48.7 billion yuan on April 28 for facilitating interbank financing without receipts. China Merchants Bank was fined 42 billion yuan for promoting lending through sales of wealth management products, a typical vehicle for banks to bypass capital requirements. Increased penalization came along with new rules requiring banks to disclose the size of their off-balance-sheet assets.

These measures were introduced to counter the growing risk posed by shadow banking, which is being fueled by strong corporate demand for funds. New flows through favored channels for shadow lending -- trust loans, entrusted loans and undiscounted bankers acceptances -- together more than tripled on the year to 2.05 trillion yuan in the first quarter. Banks' sales of wealth management products, meanwhile, swelled 23.8% on the year to 29.1 trillion yuan in 2016, according to CEIC Data. The big five banks held 7.78 trillion yuan in assets off their balance sheets as of March, more than Mexico's entire nominal gross domestic product for 2016, estimated at $1.06 trillion by the International Monetary Fund.

The shadow-banking clampdown will help ease systemic risks, but analysts have expressed concern that this will strangle banks' income, especially smaller ones.

"Off-balance-sheet wealth management products currently do not have capital charges and provisions, and mostly rely on wholesale funding like interbank deals. If these off-balance-sheet WMPs were brought back to the balance sheet, only big banks with deposits and capital could continue to provide credit to borrowers, while smaller banks will lose clients," said Dexter Hsu, senior analyst at Macquarie Research. Ken Shih, research director at DBS Vickers Hong Kong, estimates that restricted growth in wealth management products will hurt banks' fee income growth by 3-5% and stunt operating income growth by 1-2% this year.

Restrictions on shadow banking also have implication for banks' debt-equity swap programs, which are designed to reduce their capital pressure. Macquarie's Hsu estimates that the market for such swaps exceeds 500 billion yuan, representing 0.6% of total loans in the system, and could grow to 1 trillion yuan over the next two years.

"Because it remains difficult for 'real' social capital -- from sources such as insurance companies and social security funds -- to participate [in the debt-equity swap program], the funding is likely to come mainly from wealth management products where transparency, provisioning and capital charges are broadly inadequate," said Hsu, suggesting the program will actually fuel off-balance-sheet lending. "This initiative does not address the obvious need for reforms [at state-owned enterprises] and indeed promotes ongoing misallocation of capital away from the real economy," he said.

Other critics say the debt-equity swap program will merely shift the burden to households, the end-buyer of the repackaged assets. "What China has been doing over the last few years is, rather than fixing the problem, finding somebody with a good balance sheet to help the weak balance sheets," said Paul Gruenwald, S&P Global Ratings' Asia-Pacific chief economist. "Balance sheets are not infinite." 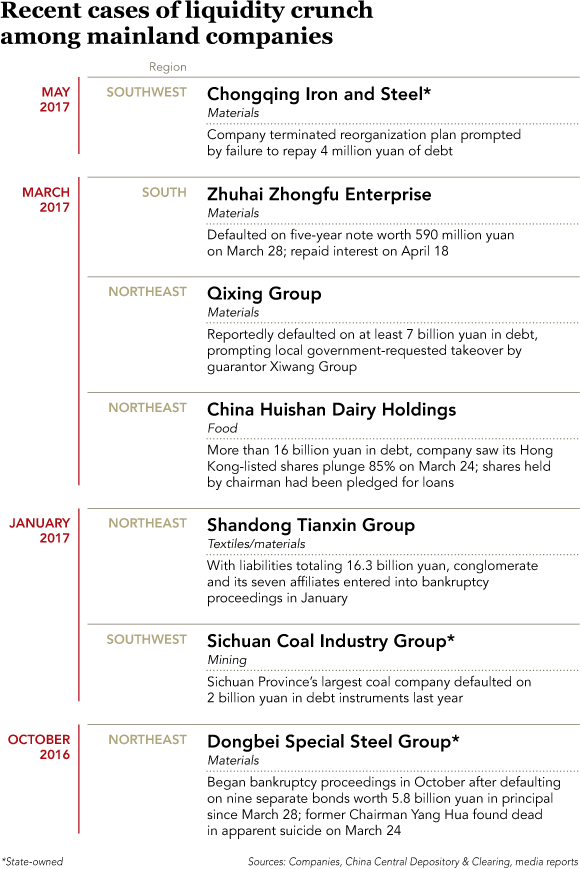