Think the RCEP is about free trade? Think again

SINGAPORE -- Delegates from Pakistan's remote Khyber Pakhtunkhwa province were all smiles as they signed an economic cooperation agreement with China on April 17.

"We have set the stage to begin [a] journey of industrialization," the province's chief minister, Pervez Khattak, said proudly at a signing ceremony in Beijing attended by 400 Chinese businesses. "We need the support of our iron brothers to put the province on the path of development and economic growth."

Khyber Pakhtunkhwa is a mountainous region in northwestern Pakistan near the border between the disputed Kashmir region and Afghanistan. A look at a map makes it clear why China is eager to boost ties with the remote province. It is situated at a strategic point in the China-Pakistan Economic Corridor, a Beijing-led infrastructure project aimed at linking China with the Indian Ocean via roads, railways and pipelines that will extend 3,000km through Pakistan.

Chinese companies involved in the project include those from the information technology, electricity, oil refining, construction and e-commerce sectors, such as China Road and Bridge Corp., China Railway Group and Sinohydro. China plans to invest $62 billion in the project, of which about $35 billion will be earmarked for the energy sector, including coal-fired power plants and hydroelectric, solar and wind power generation. For Pakistan, the deal represents welcome economic aid. For China, it is a calculated move to boost exports of steel, cement and other construction materials, as well as of electrical products and machinery.

The CPEC is just a piece of Chinese President Xi Jinping's bigger picture, the "One Belt, One Road" initiative he unveiled during his visit to Kazakhstan in September 2013.

The initiative aims to create two trade routes. "One Belt" refers to an economic zone that overlaps the historical Silk Road linking western China with Central Asia and Europe. "One Road" is a maritime Silk Road starting from Chinese coastal areas and extending to Southeast Asia, Sri Lanka and the Arabian Peninsula to Africa's eastern coast. The companies building infrastructure along these routes will be primarily Chinese ones. 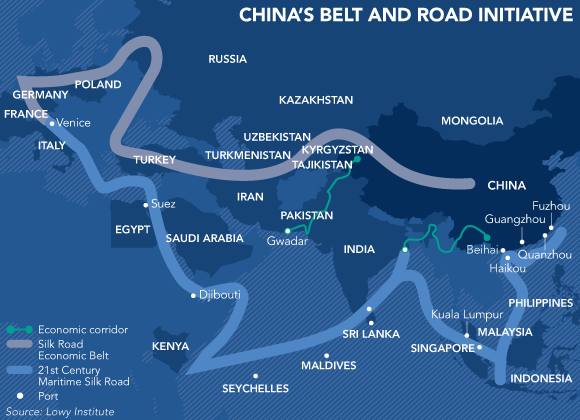 The Commerce Ministry is putting the highest priority on the initiative, and government officials invariably mention five "go-throughs," or key areas of cooperation, when explaining it. They are: coordinating development policies; forging infrastructure and facilities networks; strengthening investment and trade relations; enhancing financial cooperation; and deepening social and cultural exchanges.

While they may sound like standard public relations lip service, these phrases hint at China's ultimate intentions. By policy coordination, for example, Beijing means spurring demand for infrastructure overseas to address industrial overproduction at home. Expanded trade and investment, as well as financial cooperation, are aimed at making the yuan a global currency used for international settlement. Another goal is to set rules and standards for technology and the environment.

In other words, One Belt, One Road is part of China's attempt to create a new trade order with itself at the center. This has led some observers to describe the initiative as the "Chinese Marshall Plan," a reference to the U.S. economic aid program to Europe after World War II.

While these negotiations are ostensibly aimed at setting regional trade rules, Beijing considers the RCEP to be a key piece of its One Belt, One Road strategy. China's Commerce Ministry has often linked the two initiatives explicitly: One Belt, One Road is meant to develop industrial and business infrastructure to promote trade and investment with China, while the RCEP is intended to take advantage of that new infrastructure by establishing a free trade framework that suits Beijing. If successful, the pact will open up neighboring markets to a flood of Chinese exports.

"The RCEP is now being involved in the bigger diplomatic policy framework of the One Belt, One Road and has become a part of it," a former official at the Office of the United States Trade Representative said.

Beijing's diplomatic strategy has focused on using its massive financial resources to attract and influence economically vulnerable countries. Most countries along the "Belt" and the "Road" are developing economies. They have a combined population of about 4.4 billion, accounting for 63% of the world's population. But their combined economic size is around $23 trillion, or just 29% of the global total.

Although these countries are not important markets at present, China will be able to achieve its short-term goals of tackling domestic overproduction by artificially generating demand for public investment.

China's infrastructure-related companies are already ramping up their exports. Chinese companies won $126 billion worth of contracts related to One Belt, One Road last year. That is up 36% from the $92.6 billion in 2015, when contracts related to the initiative posted 7.4% growth from the previous year. Many of these exporters are state-owned raw materials producers that have been struggling with overcapacity and slow reforms.

China founded the Asian Infrastructure Investment Bank, which has $100 billion in capital, and the $40 billion Silk Road Fund to provide financial assistance to spur demand outside of China. In November last year, the China-Central and Eastern Europe Investment Cooperation Fund was established. This fund is projected to investment some $53 billion in infrastructure projects and the manufacturing sector in Central and Eastern Europe.

Meanwhile, the Trans-Pacific Partnership, promoted by the previous U.S. administration of Barack Obama and the Japanese government of Prime Minister Shinzo Abe, has stalled, allowing the Chinese-led RCEP to take the spotlight.

Obama once stressed the importance of creating global trade rules through fair and multilateral negotiations, saying, "The U.S., not countries like China, should write them." But his call did not resonate with the majority of Americans, and the Democratic Party lost the 2016 presidential election. Three days after Donald Trump took office, he signed an executive order formally withdrawing the country from the TPP, effectively abandoning its role as a leader in setting high-quality trade rules.

Some of the remaining TPP members are trying to start negotiations on a so-called TPP 11. On April 19, Japanese Deputy Prime Minister Taro Aso said discussions on putting the deal into effect without the world's largest economy will begin in May on the sidelines of the Asia-Pacific Economic Cooperation meeting.

There are reasons for Japan to promote transparent, high-level trade deals like a possible TPP 11. The Abe cabinet has been trying to expand exports of infrastructure technologies amid fierce competition with China over high-speed railway projects in Indonesia, Malaysia and Singapore. Japanese businesses are reluctant to answer the government's "All Japan" call because they cannot compete against Chinese rivals who are able to undercut them by pricing their projects at a loss.

Should Japan and the U.S. lose their standing as leaders in global trade, the door would be open for China to set the agenda on trade rules.

Just what that agenda is seems clear. Through the RCEP, China is aiming to make ambiguous trade rules the global standard. So far, there have been no signs of serious discussion regarding such areas as e-commerce, state-owned enterprises, the environment and labor standards. China, which is leading the negotiations, has little use for rules in these areas. The focus of its trade policy, after all, is on traditional exporters -- steel and cement, for example -- not on the industries of tomorrow.

For the government of a sprawling nation saddled with an aging industrial model, laying the groundwork for stable global growth takes a back seat to propping up its own economy. In the end, the RCEP is nothing more than a contrivance aimed at creating massive overseas demand for Chinese companies.

U.S. National Security Adviser H.R. McMaster visited Pakistan on April 17 for talks with Prime Minister Nawaz Sharif and military leaders. He was the first senior official of Trump's administration to visit the country, but his trip was not announced ahead of time. Washington is apparently becoming nervous about China's growing influence over Pakistan, but it may be too late for the U.S. to rekindle its commitment to South Asia.