TOKYO -- Another three years and the Tokyo Olympics will be here. The lead-up has begun; construction is underway on event sites and hotels. Total public and private sector investment is estimated to exceed 10 trillion yen ($90 billion).

The showcase will not only be for athletes; companies are also keen to let their latest technologies compete for the spotlight.

In Tokyo's Jingu Gaien district, some 800 workers and 23 cranes are hurrying around a 110,000-sq.-meter site, erecting the new National Stadium. Construction was originally planned to start in October 2015 and be completed in March 2019. But controversy and soaring construction costs forced a re-design. Construction did not begin until December, and completion is not expected until November 2019.

Let that sink in.

But wait, this is the Olympics we're talking about, and the amount could increase as the pageant approaches.

The estimates include urban renewal projects in Tokyo. While office buildings and residential complexes are not really Olympic-related, they have been triggered by the Olympic frenzy. Mori Building has caught the fever and is working on a large-scale development project in the Toranomon area of Minato Ward. The office and residential buildings are expected to cost 400 billion yen. Transportation links and other infrastructure is seen at 3.7 trillion yen.

East Japan Railway is also involved in Olympic-triggered construction. It plans to pre-open a train station between Tamachi and Shinagawa stations in 2020. And Shinagawa Station is to be upgraded to accommodate maglev trains that will run along the Linear Chuo Shinkansen Line, which will start carrying passengers between Tokyo and Nagoya, central Japan, in 2027.

JR East, as it is better known, is also renovating seven other stations in Tokyo, including Harajuku -- which will be the closest JR station to the main stadium.

Also falling into the Olympic-related basket are 60,000 hotel rooms that will be added across the country at a total cost of nearly 1 trillion yen, according to a Nikkei estimate.

As for the Olympic technology showcase, Japan plans to fully start 8K broadcasts in 2018. Also, 5G, or fifth-generation cellular service, is expected to be ready for the Olympics. And Nissan Motor intends to have autonomous cars driving on public roads by that summer. 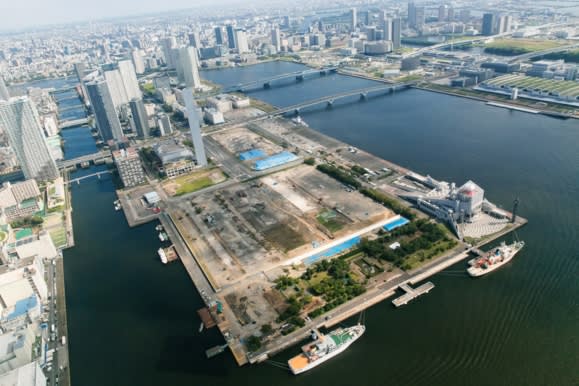 The 2020 Tokyo Olympic Village is to be built on this site.

While all this Olympic-motivated spending is spurring business activity, the Tokyo Metropolitan government estimates the international sports festival is making a 32 trillion yen impact on the big burg. The metro government figures the impact began in 2013, when Tokyo won the bid to host the event, and will fizzle out in 2030.

Japanese workers already are having little trouble finding jobs. The country's ratio of job-openings to job-seekers in May stood at 3.53. This means 75,000 of 105,000 jobs went unfilled that month.

The ratio has been consistently rising since it was at 2.62 in September 2013.

Koichiro Higashide, executive vice president of construction company Shimizu, sees the trend continuing. "The supply-demand balance in the labor market," he said, "could possibly become even tighter" toward 2018 through 2019, when a series of construction projects, including sports venues, are expected to be completed.

If the need for builders does indeed fall, that for service industry workers is expected to be acute once the Olympics begins. Restaurants, hotels and other service providers could find themselves short of hands.

In that case, omotenashi, Japanese-style hospitality, could take a reputational blow.