Tokyo Big Sight will not be available for exhibitions and other events while it serves as the media center during the 2020 Tokyo Olympics.   © Reuters
HISASHI TSUTSUI, Nikkei staff writerMarch 19, 2019 07:03 JST | Japan
CopyCopied

TOKYO -- The 2020 Summer Olympics threaten to upend the schedules of hundreds of exhibitions and conventions in the months surrounding the Tokyo Games.

The largest convention center in Japan, Tokyo Big Sight, will house the media center during the Olympics. Over 200 exhibitions will need to change venues or cancel events altogether, according to the Japan Exhibition Association, or JEXA. Those changes could impact more than 80,000 corporate participants.

The association collected 150,000 signatures as of mid-January for submission to the Tokyo and national governments, imploring that as many conventions as possible be held at normal capacity.

"We request that the usage restrictions [for Big Sight] run for a shorter period," a JEXA representative said.

Work begins next month to convert Big Sight into a media center, rendering some parts of the site inaccessible. Temporary structures will be set up nearby. A new convention hall opens at Big Sight in July, but the available space will be about 20% smaller. The entire venue will be virtually unusable for other purposes between May and September in 2020, a period that includes the Summer Games. 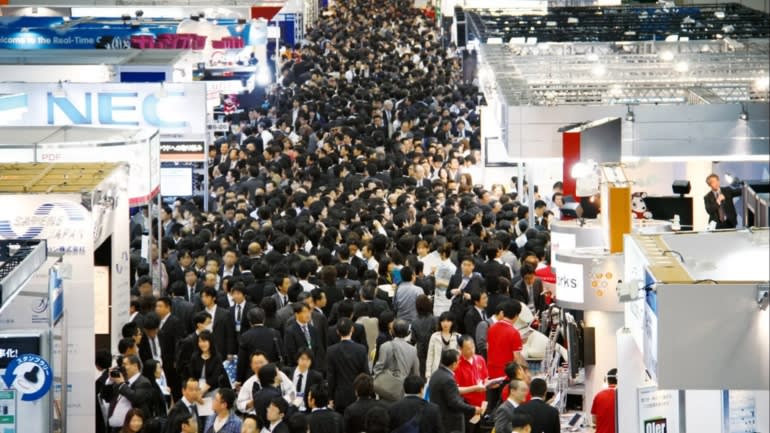 An information technology event is held at Tokyo Big Sight.

Flower Dream, which takes place at Big Sight every April, will not be held this year or in 2020. Nearly 50,000 people attend the flower design and sales event over two days.

"We looked at other facilities in the Tokyo area, but there were virtually no openings," said a promoter.

Tokyo Pack, a convention hosting about 700 packing materials companies, will push back its previously scheduled October 2020 date to February 2021. However, another event in the industry occurs every year around that time.

"I'm worried whether we can secure as many exhibits as normal," a representative said.

The president of a minor machinery manufacturer outside Tokyo sets up a booth twice yearly at Big Sight conventions.

"The exhibitions were the best chances to sell," he said, worried about an Olympics "cliff" off which sales will dive.

The company is scrambling to soften the blow, but has only five people in its sales staff. "I'm joining the sales team with the aim of covering the revenue hole," said the chief.

The Makuhari Messe, Japan's second-biggest convention center in the nearby city of Chiba, will host Olympic fencing and wrestling matches. No other events will take place there between late April and mid-September of 2020. Pet Haku, which showcases pets and pet products, instead will open farther south in the city of Shizuoka.

"The number of attendees will be cut in half," an organizer said.

The Tokyo-area Saitama Super Arena also will be off-limits for several months as it will host Olympic basketball games.

"There are many businesses whose earnings depend on exhibitions and events," said Tatsumi Okaboshi, a Mejiro University professor specializing in event science. "Measures to support these companies at the business end need to be considered."

Japan "is being replaced as a host for global events," said a JEXA representative.