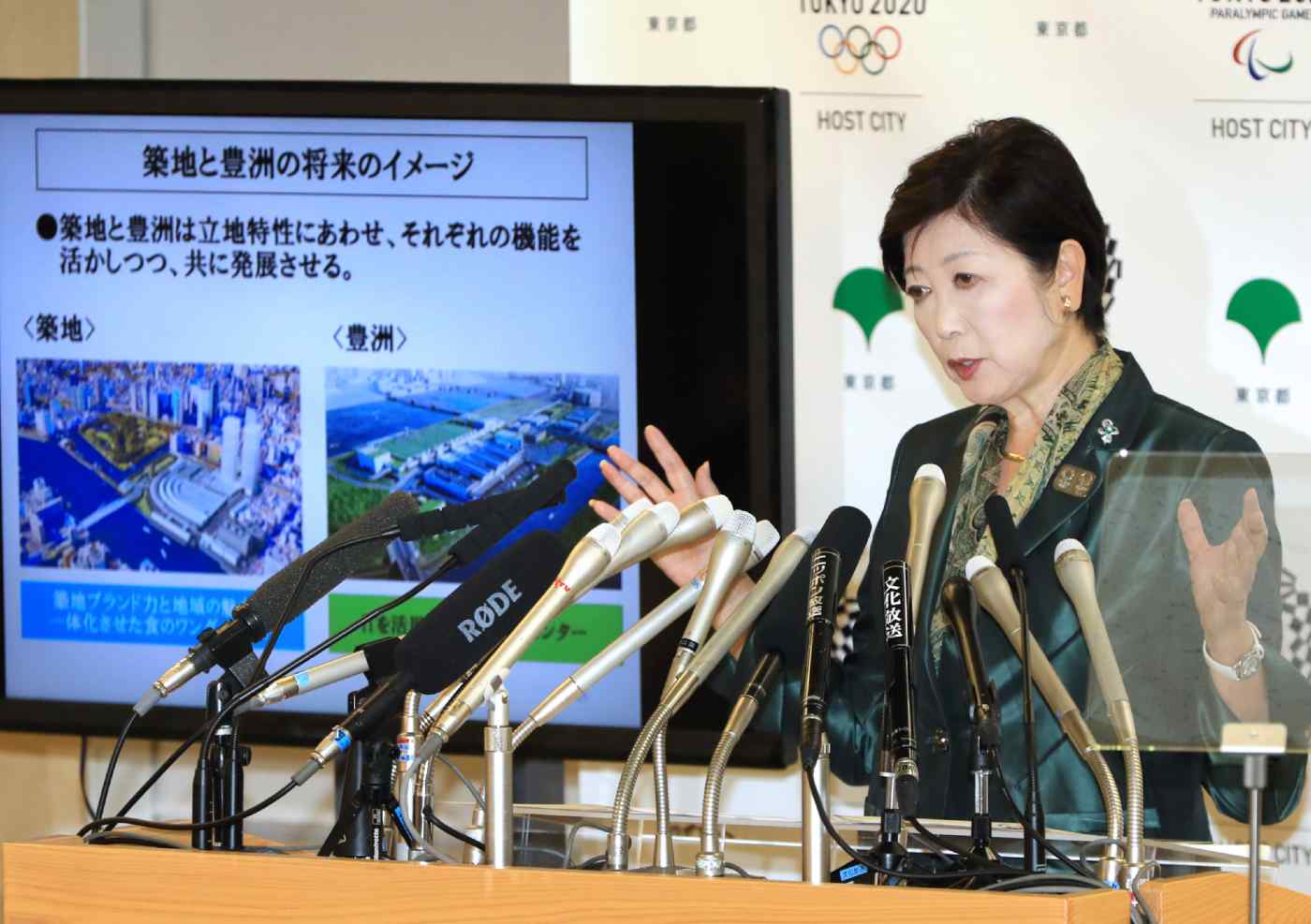 TOKYO -- Tokyo Gov. Yuriko Koike on Tuesday approved the relocation of the storied Tsukiji fish market and discussed plans to keep the old site a center of the culinary scene for years to come.

Koike told reporters that the 80-year-old wholesale market -- long a magnet for tourists -- will be moved to the Toyosu waterfront district as planned, once additional measures are taken to address pollution concerns. At the same time, she said she intends to redevelop Tsukiji in around five years, turning it into a "food theme park."

Keeping Tsukiji and redeveloping it, rather than simply selling the plot of land, will generate more cash for the city over the long term, she said.

Koike's decision on the controversial relocation comes three days before campaigning begins for Tokyo's July 2 assembly election. The governor hopes to see her party secure at least half the 127 seats, and the Tsukiji move is expected to be a hot topic on the campaign trail.

Tokyo decided in December 2001 to move the Tsukiji market, located on Tokyo Bay in an area close to the upscale Ginza shopping district, to Toyosu, around 2km away. But environmental concerns have delayed the move: The new site used to be home to a Tokyo Gas facility, and studies have shown hazardous substances in the groundwater exceeding environmental standards.

Koike -- a former defense minister who some suspect is eyeing a return to national politics or even the prime minister's job -- was elected governor of Tokyo in July 2016, just months before Tsukiji's scheduled moving date that November.

That August, Koike announced she was putting the relocation on hold, citing the need to ensure the safety of the new site.

This drew criticism from the ruling Liberal Democratic Party, which has long pushed for the relocation. Hakubun Shimomura, a senior LDP official, has said over 10 billion yen ($89.5 million) has been wasted because Koike stalled the move.

Earlier this month, an expert panel compiled a list of additional safety measures that should be taken at Toyosu, such as spreading special sheets in the space below the market building.

Koike aims to deflect arguments like Shimomura's -- and help her party's chances against the LDP in the assembly poll -- by pledging to redevelop Tsukiji into a new hub for business. She said the site will retain some of its market functions, though she did not elaborate.

The metropolitan government has already spent nearly 600 billion yen on the construction of the Toyosu market. Tokyo officials forecast the new facility will be saddled with 9.2 billion yen in annual losses, but Koike suggested her "food theme park" plan would offer relief from the bleeding.

"We cannot leave such debts to the future," she said.